I've been meaning to visit the circle at Cullomane East for some time. It's only up the road and we've probably driven past it loads of times en route for somewhere else. So today is the day to put that right !
We don't head off until the afternoon, but as I said before, it's not that far to go. Out to the R585, take a left at Cullomane Crossroads. Then left up a farm lane and first right up to the farm.
We ask permission at the farmhouse and get the go ahead.
Heading down the small lane, a Hare darts across the field. That's a good start !  Two stones of the circle soon comes into view on the right. Then it appears in all it's glory. A five stone circle, with all five stones still standing. A boundary hedge has been built and incorporates two of the stones and some pebbles from the field clearance fill the middle. Apart from that, it is a perfect little circle. Aligned NW-SE and according to Jack Roberts,has an orientation of 220 degrees for the Winter Solstice.

The conical Sprat Hill stands to the North West and the site enjoys unbroken views to the South and West. The wind turbines on Glanta Commons give a modern feel to this ancient landscape.
In the field above, some 60 metres to the North East is a curiously shaped outlier. Now unfortunately fallen, it stood over a metre high.

Carrying on to the end of the field and through the gate. Just off to the right,  there are more standing stones, the remains of a radial cairn and a wonderful large pure quartz Boulder Burial.
It's quite a confusing site. The area became a cult area for St Colman (who gave his name to the Townland) and annual pilgrimages were held on Beltaine. There is a holy well here dedicated to him.
In the next field, a number of small cairns form part of the penitential stations of the pilgimage. This is  probably how the radial cairn got damaged, as pebbles were carried and piled onto the smaller cairns.
The Quartz Boulder Burial is just simply beautiful ! Two support stones are just visible. It just beams at you !

Heading back through the gate, go through the gate that is on your left. The fallen Standing Stone is up on the hill. There is another gate to your left and in this field lies a Cillin and a Ring Fort.
The small Cillin is situated to the left against  the hedgerow. Ivy wrapped Hawthorn trees grow inside and  coconut scent from the golden yellow Gorse blossom fills the air.
On the otherside of the field, sits the small Ringfort which would have looked over the whole site in days gone by.
Back through the gate(s) and one final look at the circle, before heading back to the car, where a cockerel struts about on the Farmhouse verandah. What an idyllic spot this is ! 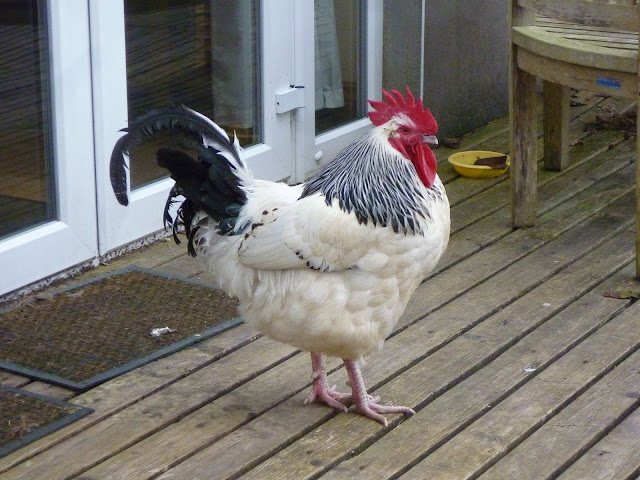 While we're in this neck of the woods, we might as well carry on up the road and have a look in on Trawlebane Stone Circle. It's another one that we pass by a lot and never stop at. Though that's mainly due to the fact that it's a bit overgrown !
So we drive up, through Baurgorm Townland and round past the O'Neil monument in Trawlebane/Trollibane/Trolibawn.... there seem to be umpteen ways of spelling it !
We park up in a gateway just past the circle and walk back down the road. The field gate is open, so we go in and head over to the mass of brambles that cover this poor old circle.
When you get close up, you can make out all of the stones. They are all still standing and in good condition, but the interior has been filled with stones and boulders from the field. This and the fact that it's in severe need of a haircut make it difficult to truly appreciate what is undoubtedly a fine circle.

A quick stop off at Ahanafunsion Bridge, which is a delightful spot, before heading into Drimoleague for a bag of chips !

Posted by Michael Mitchell at 23:32