A nice early start this morning. We're heading for the Sheeps Head Peninsula and the stone circle at Gorteaneish near Ahakista.
The weather's not up to much... It's another one of those days where they promised us sunshine but all we have are grey skies and a bit of drizzle.
We make our way through Durrus and follow the coast road until we reach the Air disaster memorial just outside of Ahakista and it's here that we park up.
The circle is on one of the loops of the Sheeps Head Way - the aptly named Stone Circle Loop !
Boots on and wander off down the main road, through the village for about a mile. An early Chiff Chaff sings away, as the sun at lasts comes out, albeit briefly. Past the first right hand turn, keep going until we see a sign for the stone circle loop pointing up the lane on the right. After fifty yards or so there's a memorial stone for Tom Whitty, who was instrumental in the setting up of the Sheeps Head Way path and also another stone commemorating the opening of this path in 2000. 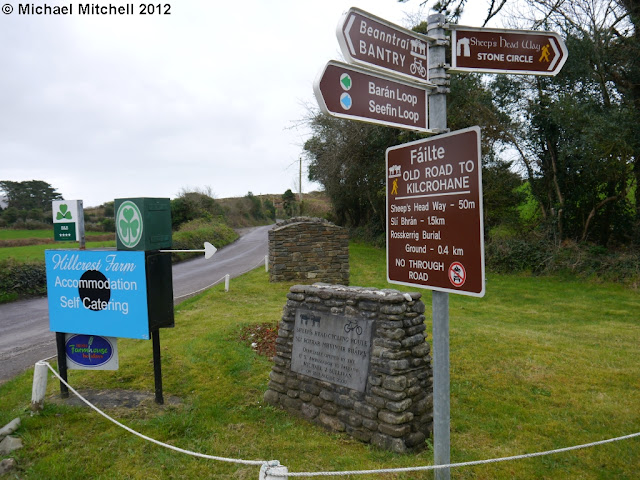 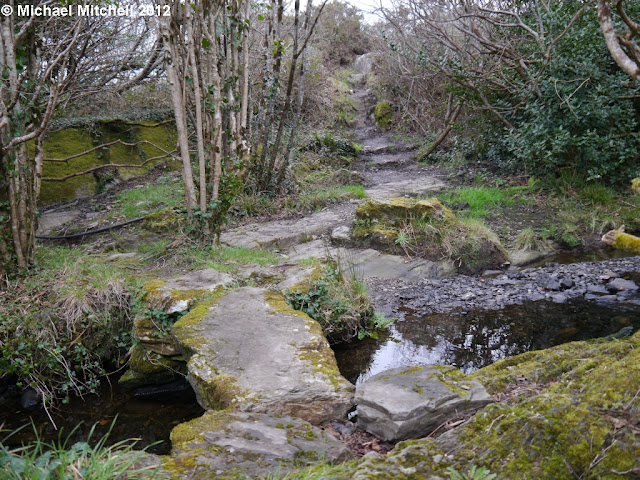 There's a stone bridge over the small stream, which trickles down over the rocks.
The path takes us up past the back of some houses, over another small stone bridge and into an area of gorse and Willow.
There, before you know it, is Gorteanish Circle in a small clearing. Apparently, the circle was "discovered", when the gorse was cleared to make the path.
Only four stones remain upright, with at least a further seven laying prostrate. A possible capstone from a boulder burial sits inside the circle to the NW.
Another boulder burial lies just outside the circle to the South, though now engulfed in brambles.
Several smaller stones are dotted around and what looks like a broken outlying Stone sits just a metre or so to the West. Two shallow pits have been been dug in the circle.
With so much vegetation around, it's hard to put any perspective on it's position and relationship with the landscape.The modern day views being obscured somewhat ! It obviously overlooks Dunmanus Bay and Seefin and Rosskerrig Mountain would have been prominent on the horizon to the West and North West.

After a good look around, it's time to move on across the moorland,where a Snipe flies out of the bog, zigzaging it's way off  into the distance.
The path comes out onto a road and we follow it back down to the village. Then it's just a matter of retracing our steps back to the car.
A quick look over the bay reveals a Great Northern Diver swimming just offshore.
Back at the car, I decide that we might as well head on to the Stone Row in Maulinward Townland. It's on the way home anyway !
So, back through Durrus and down the lane past Maulinward and out to the N71.
Gonna nip up to Parkana and ask the Farmer first.
He gives us permission and tells us the best way to get there.We need to park in the gateway just 50 yards this side of Letterlickey Bridge, then it's the third field along.
All pretty straightforward. The fields are actually quite dry as well. Two small ditches en route present no problem and there are the stones..... surrounded by Sheep..... but not for long, as they wander off up the field at the sight of intruders.
This isn't just a Stone Row ! There's the remains of a radial cairn just a few yards to the North. A small arc of seven stones are all thats left of the outer kerb stones. The interior is filled with large and small stones... debris from the cairn itself.
The row is made up of three stones, aligned NE-SW. The SW stone leans heavily, but the other two are both upright. A fourth stone lies prostrate but is probably from the cairn. None of the stones are massive, the tallest being around four foot !
The site is situated in a valley, in undulating green fields, on a flat part of a rise. Four Mile Water flows just to the South. A delightful setting, as Skylarks sing all around.
It's time to head back to the car and home for a well earned cup of tea !