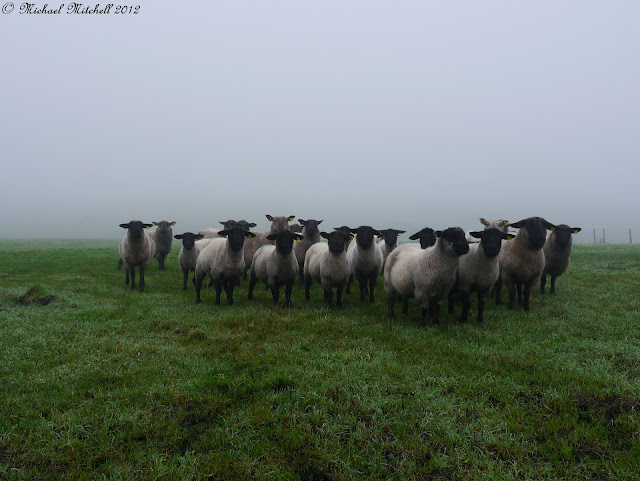 The first real trip out in the new year. The plan is to head up a few miles the other side of Macroom to Cabragh, where there are stones galore (according to the map, anyway !)
The sun is shining and the sky is blue as we set off up the N22.
As we pass Drimoleague and call in to the garage near the lakes, for fuel, the sunshine turns to fog...... thick fog !
Hopefully it'll burn off by the time we get there. It's a pleasant journey nonetheless and soon we are passing through Macroom and heading through Clondrohid, then up the narrow lane to Cabragh. There are at least two stones in the fields to the left, which we will have a look at on the way back.
There's a small cross roads where we park up and I knock at the nearest house to check that it's ok to head on up. The lady doesn't know the stones very well, but says it shouldn't be a problem, so boots on and head up the (very) long track.
There is a stone pair up on the left hand side right on the double bend. The banks are quite high, but I can see the top of one of the stones. This is Clashmaguire stone pair, and unfortunately it is buried in a morass of gorse, brambles and birch saplings.
I stand on the bank, looking and decide to tackle it on the way back down.
Carrying on up the track, Fieldfares and Redwings fly out of the plantations and Ravens call, echoing in the mist. I've a hand drawn map of all the sites which tells me that the first of the rows must be coming up soon and sure enough, there on the hill to the right, looking almost mystical, outlined in the fog is Cabragh stone row.
This is the more Southerly of the two rows and consists of five uprights out of an original six. Aligned East - West, the stones vary in height from 1m to 2.4m, though the fallen stone would have been the tallest at 3.1m.
There's no gate into the field and the banks are quite high.Instead there's a couple of stones conveniently set, which make it easy to walk up and the fence is easily stepped over. The field is wet and muddy....AND full of sheep, very curious sheep. They follow me around almost comically. Stopping when I stop to look round then following again. They also like to pose for the camera.
I'm really impressed with the row, the mist giving it an almost ethereal feel. It is silent here, just the occasional call of a Meadow Pippit dancing in the air.
Photographs taken, I am followed all the way back to the fence by my woolly retinue.
I step over, jump back down to the lane and check the map.
Soon I pass an old abandoned farmhouse on the right. I know that Cabragh circle and the second row are somewhere in the fields beyond.
Just past the farmhouse I make out the old ringfort, so head through the gate into the meadow. There is a stone pair over in the rough field to the left. Carefully, I navigate the barbed wire fence and see the stones.
This is Carrigonirtane stone row (grid ref W275797) and is in fact a three stone row aligned NE-SW, although the middle stone has fallen. None of the stones are particularly big, the tallest being the SW stone, at 0.95m. The ringfort is only about 50 metres to the North West.
Back over the barbed wire to the field, there are a couple more gates to hop over before reaching an area of rocky outcrop. I know that I'm near, and I notice the row further on. There's another rickety gate, which takes me into a wet boggy area and then through an overgrown brambly/gorsey field and over to the second of the Cabragh rows. 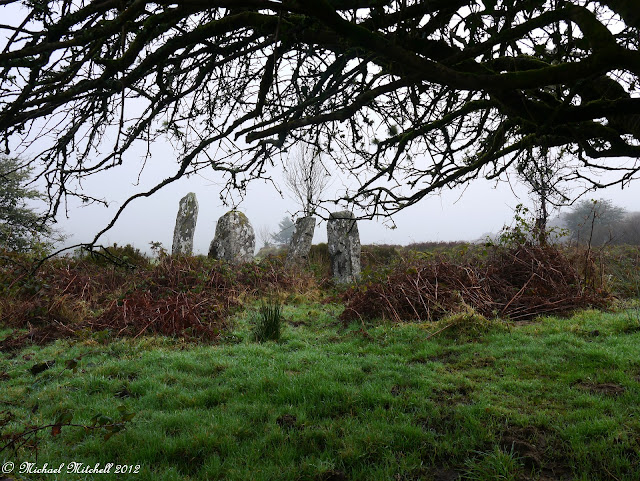 This one is very impressive ! All of the stones are massive and even the fact that a field hedge has been built through it, can't detract from it's imposing nature.
As the crow flies, it is about 250m East of the Carrigonirtane row and 600m North of the other Cabragh row, though not intervisible.with either.
Aligned NE-SW and nearly 8m in length, the stones vary from 2.35m to 3.3m.
Just 6m to the North and intersected by the same hedge sits the sad remains of Cabragh five stone circle. Just two stones are now visible, with two more, including the axial stone (according to O'Nuallain) incorporated into the field hedge and the fifth one missing altogether. It's a small circle, diameter is c3.2m and is aligned the usual NE-SW.

Retracing my steps back to and over the rickety gate, I take a look up on the hill, where once stood five more large standing stones. They were mentioned in 1918, but have all since been removed. This surely must have been a very important ritual centre - there was so much here!
Time to head back down the lane and try to get a better look at the Clashmaguire pair !
Climbing up onto the bank, I can see that there is just no way through the impenetrable thicket that has grown up here, totally engulfing one of the stones, with the second one surely about to recieve the same fate in the very near future.
I take what photographs I can and head back to the car.
We were going to have a look at the stones, which we passed on the way up - on the way back (if that makes sense !)
The first one is a fine single standing stone in Clashmaguire townland. Unfortunately, a rather large German Shepherd is sitting near the field entrance, and even though he has a smile on his face, I'm sure that it's just a ruse to get me out of the car ! Oh well looks like a photo over the hedge for this one !
Last stone of the lane is another single standing stone this one being in Gortnalicky townland.
We drive back via Inchegeelagh and Bantry....and as we get near to Bantry the blue skies and Sunshine return to replace the mist.......
Another great day out in Cork !

Posted by Michael Mitchell at 00:39