Today, we are heading over to the stone row at Castlenalact which is the other side of Bandon. Instead of going via the N71 though, we are going to go the long way round ! The sky is a moody mixture of blues and greys of every shade, as we head through Dunmanway and on towards the twin villages of Ballineen and Enniskeane. One blends seamlessly into the other as we look for a left turn to take us to Kinneigh and it's famous round tower.
It's really easy to find, as we spot it from the main road and take a small left turn to the church
The tower itself was built sometime in the 11th Century and was part of the monastary founded  here by Saint Mocholmóg, who was the Abbot in the yeat 619.The original monastary was built a little further to the East and was subsequently destroyed by Danish raiders. A new monastary was built around 900 AD near to the present church. Kinneigh is one of only two round towers in Cork and unique in the fact that it is the only one in the whole of Ireland to have a hexagonal base.
It is around 80 foot in height and would have originally had a conical roof. A bell tower was added in the mid 1850's. The bell is now kept in Kinsale for safekeeping !
Jackdaws are calling overhead and circling above the tower and the trees at the back are full of Winter Thrushes..... Redwings and Fieldfares, probably driven Southwards by the bitter cold. 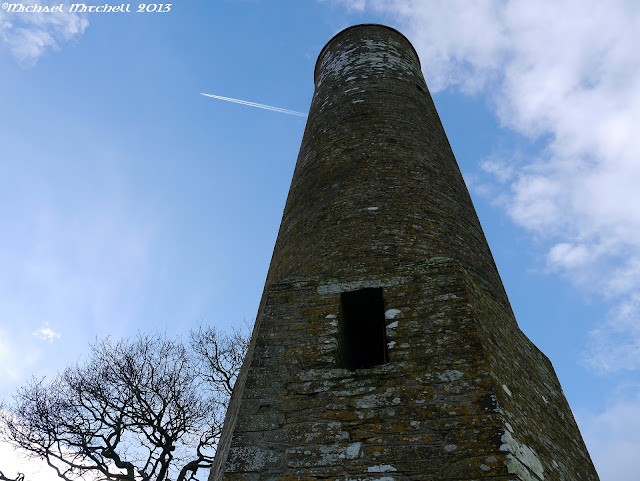 Back in the relative warmth of the car, we thaw out and continue on through Coppeen, then Beal Na Blath, Crookstown and then towards Bandon. We are looking for a turning to Templemartin, which should then take us to Castlenalact.
More by luck than judgement we end up on the right road and see the row in the distance. There's a right hand turn, which takes us down a narrow lane, past a sports field and a standing stone.
The row is in the next field. There is a small abandoned cottage where you can just about park and the access is just so easy.  A short pathway and one strand of electric fence (which wasn't on - luckily !) and there you are at this magnificent monument.
Four massive stones greet us, lined up East to West. The tallest at the Eastern end being a whopping 3.4m (over 11ft).
There is a fallen stone laying towards the Western end of the row. Covered in marks, probably from a plough, it looks more likely to have been put there as field clearance, than to have been an original part of the row.
We head over to the next field (North) to look at the standing stone. It is irregular in shape, wider than it is tall. There is a boulder burial further to the North in the next field, but time is getting on and rain is threatening. We'll leave it for next time !

Posted by Michael Mitchell at 21:31