Another day on The Beara 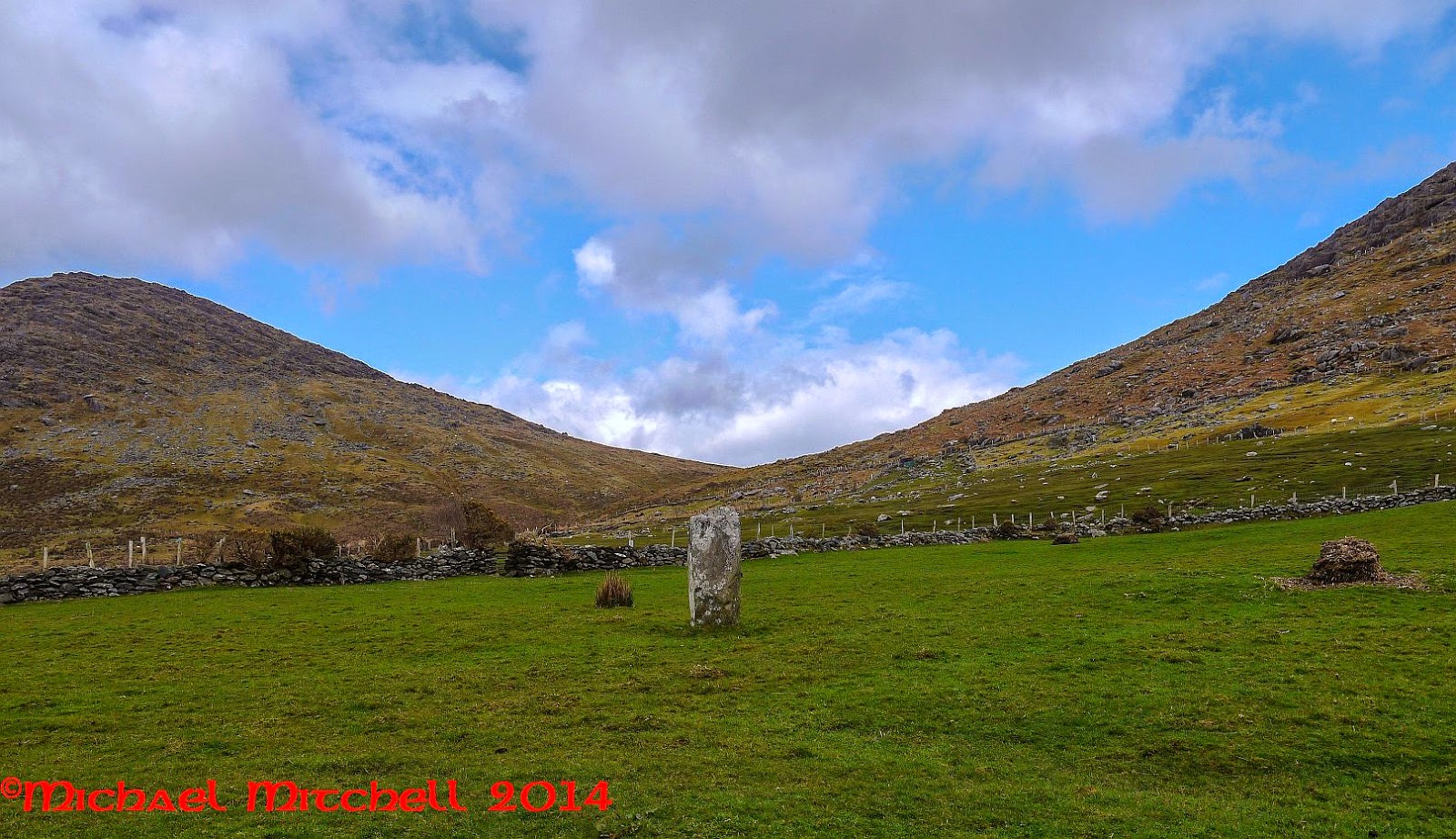 25th March 2014
My Son is over for the week, so we thought that we would take him over the Healy Pass and around the Beara Peninsula.
The weather isn't too bad, a few showers mixed in with some sunshine and plenty of cloud. The road through the Healy Pass is as beautiful as ever and we make the obligatory stop at the top for photographs and to admire the magnificent views. The sky is moody and the wind is fierce as it brings a shower our way.
We head over the top and into Kerry,following the road down to the small cluster of houses on the right. This is Clogherane Townland and our first "stone stop" of the day.
A short walk up the track brings us to a standing stone in the field on the right and a stone pair in the field to the left. The farmer tells us to "work away" and we head over to the stone pair.
It's a dramatic setting. Knockowen towers above us to the East, Knockastumpa to the North and the big hills of Lackabane and Eskatariff over to the West, 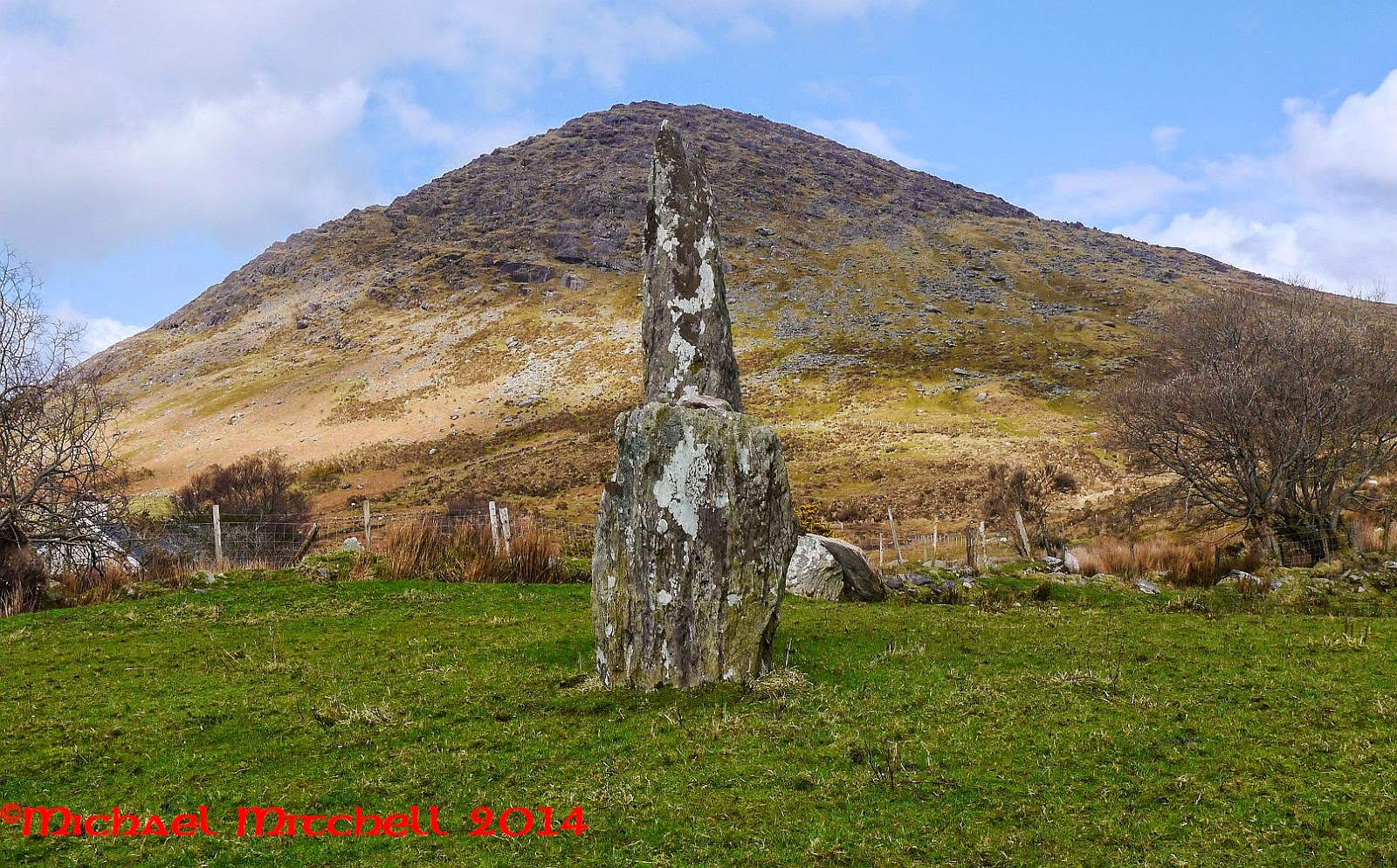 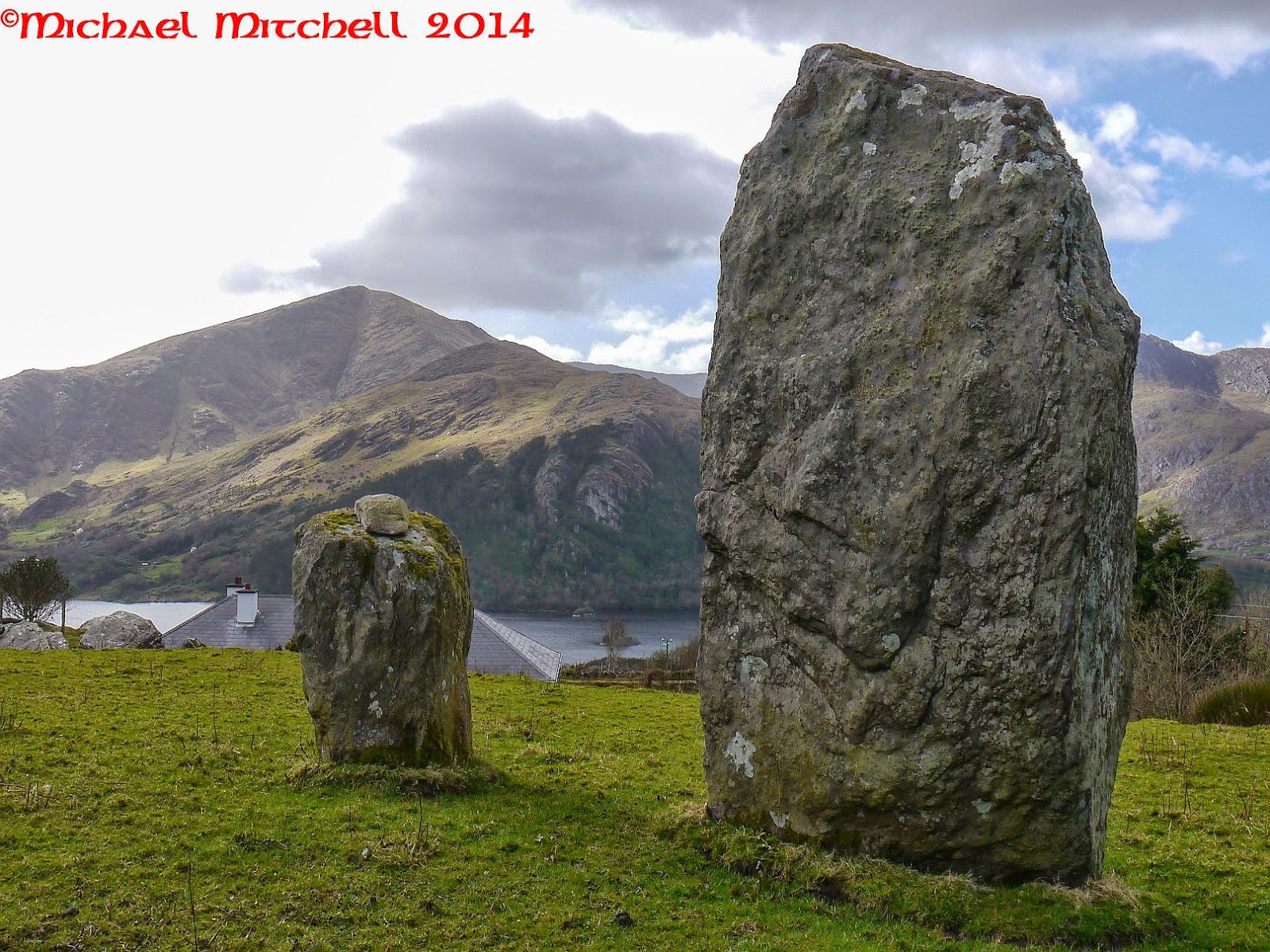 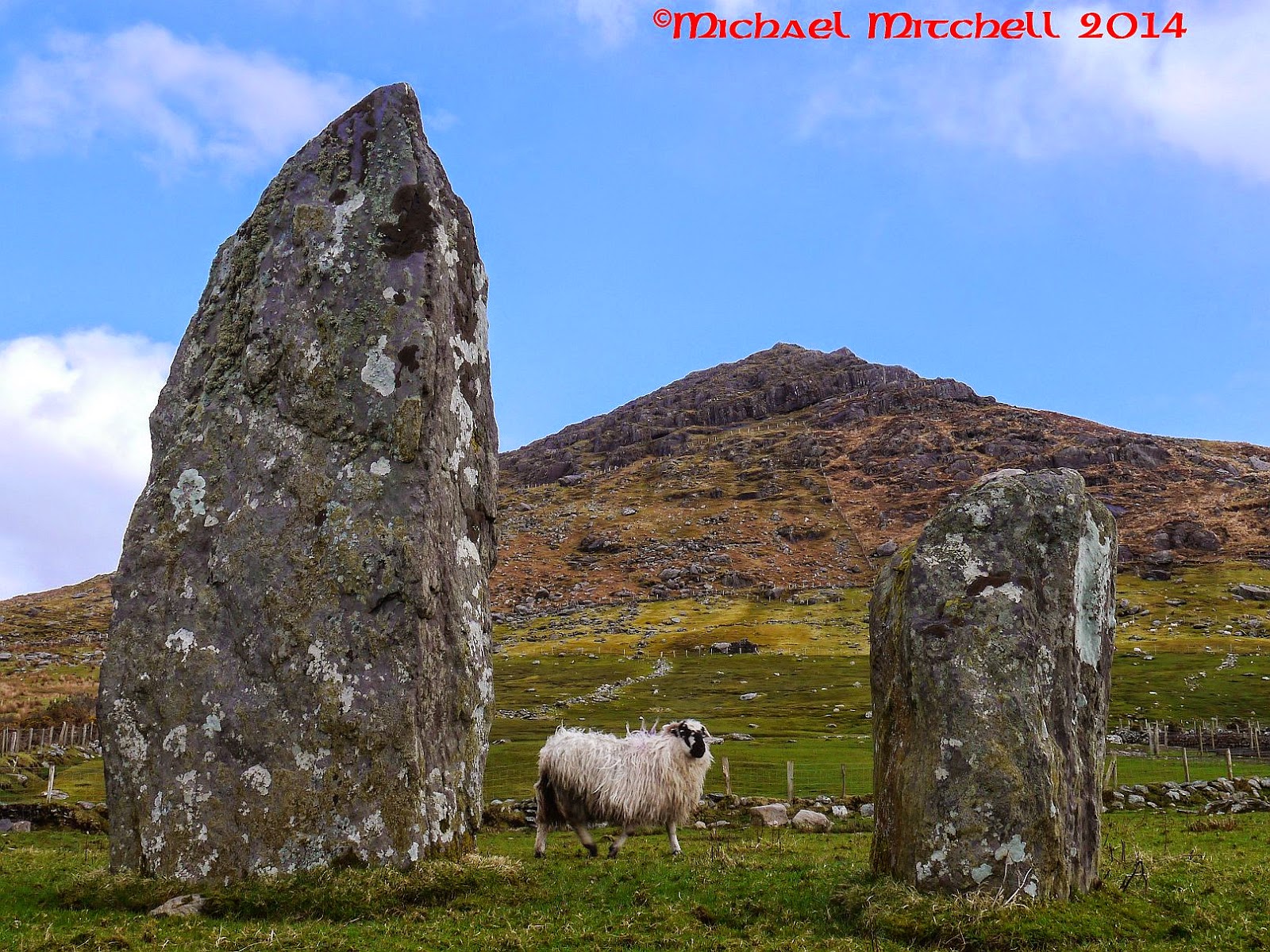 The row itself is aligned NNE-SSW, with the larger of rhe two stones at the NNE. It is 2.6m in height x 1.5m x 0.4m. The smaller stone is less than half the size at 1.16m high x 0.6m x 0.5m.
The Sheep in the field are very curious and come over to see what is going on.
Next we head over the track and into the next field for the single standing stone. This stone is aligned NNE-SSW and is 1.3m high x 0.79m x0.46m (all measurements are from the NMS). There is supposed to be a small cairn just 6m to the South East, but there is no sign of it anymore.
We drag ourselves away from this wonderful place and head towards Lauragh. It's sad to see that the little sibin and Murphy's pump by the old bar is looking rather neglected and run down. 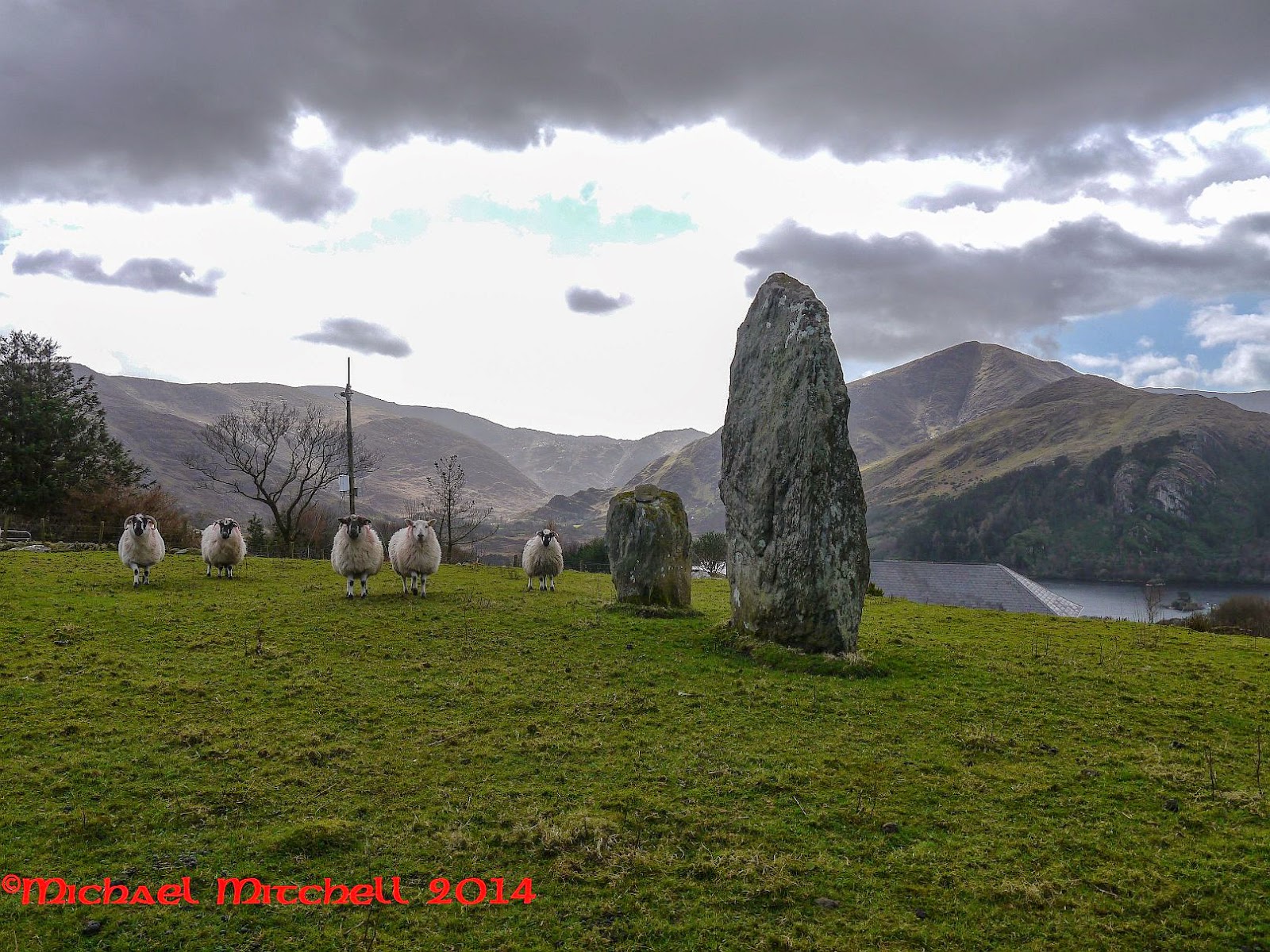 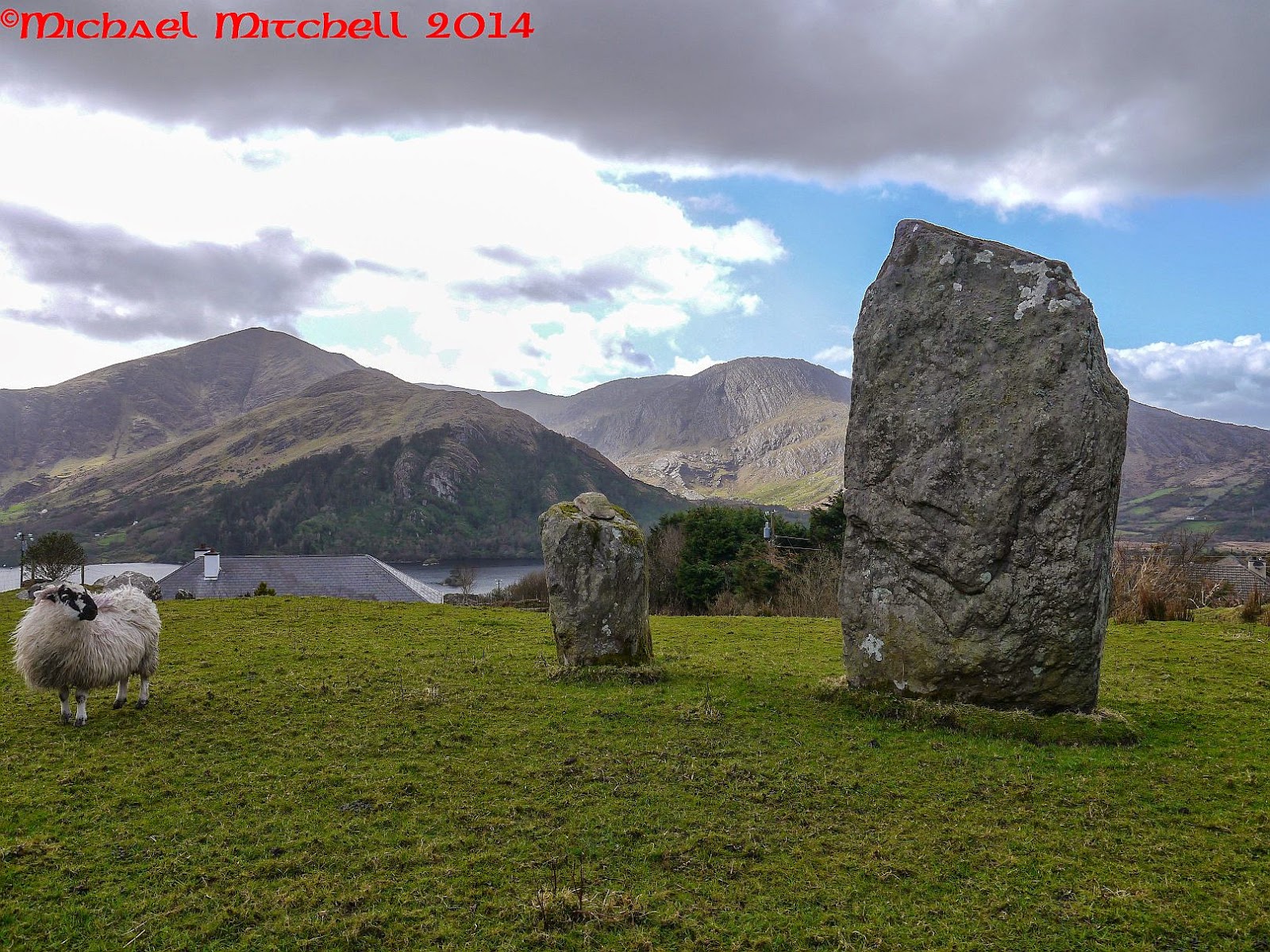 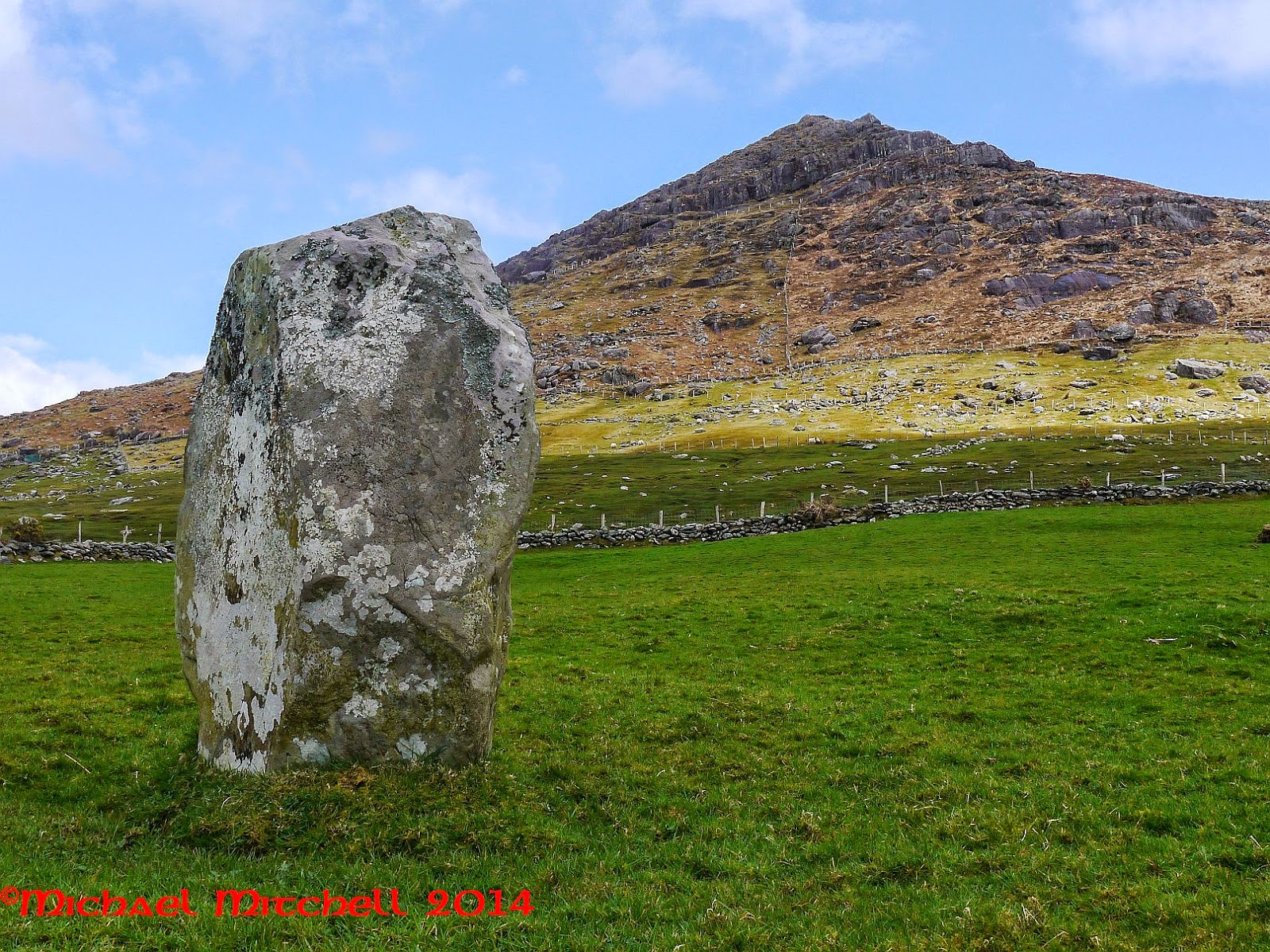 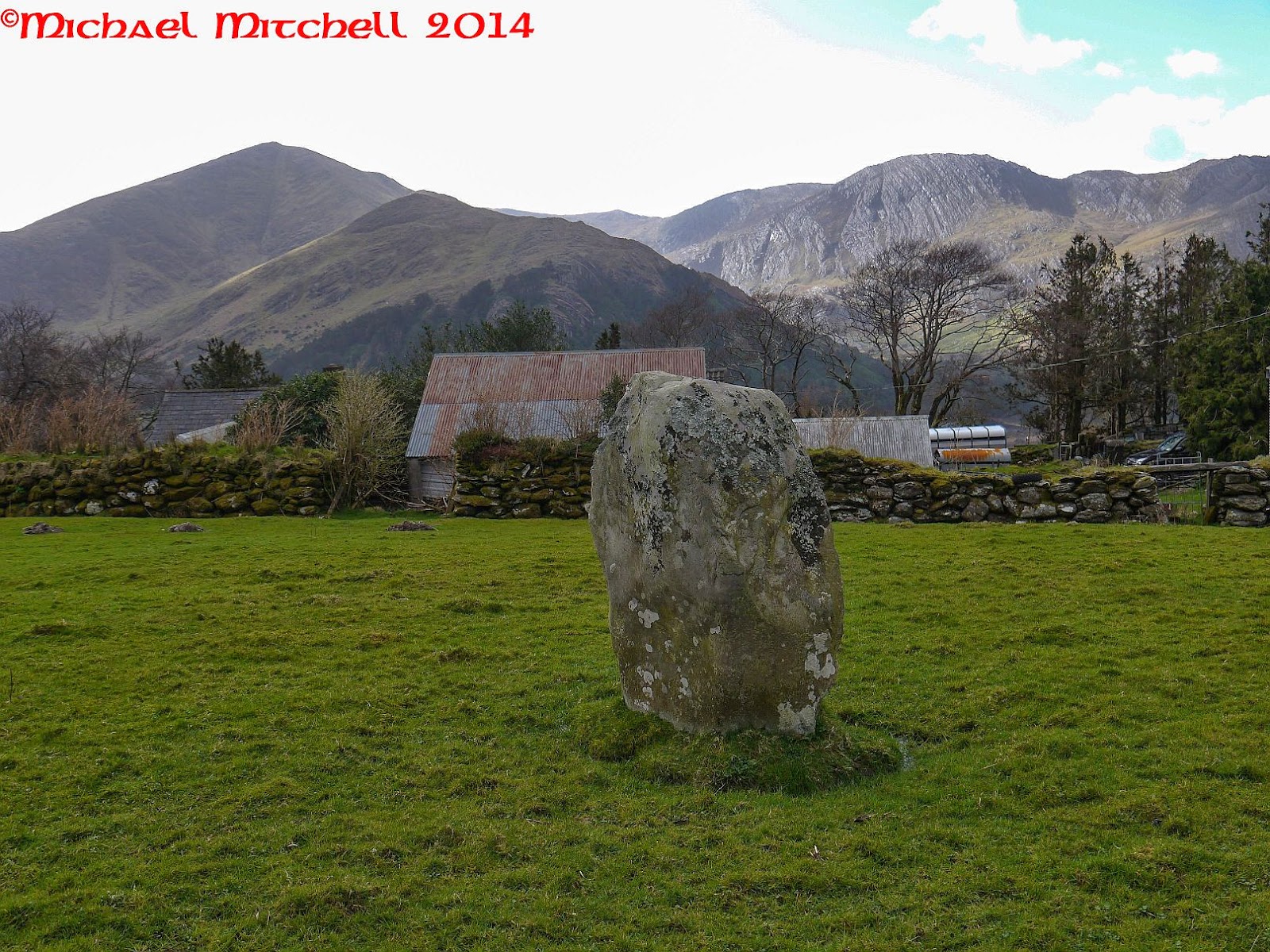 Getting onto the coast road, we head back into Cork, through Ardgroom and Eyeries. Stopping every now and then for photographs.
Just after Eyeries is a lane down to Pallas Strand. The end of it ends abruptly. The road smashed up by the recent storms. Walking along the strand, I notice a large white Gull, on the far side - It's a 2nd year Glaucous Gull an unusual winter visitor to these shores from the Arctic.
Heading back up the lane, we take a right turning into Coulagh Townland and find a large standing stone at the fields edge. Another stone sits further down the field. There should be five stones in the fields here, but we can only see the two from the road. The fields are full of Sheep and new born lambs, so we content ourselves with some photo's from the roadside. 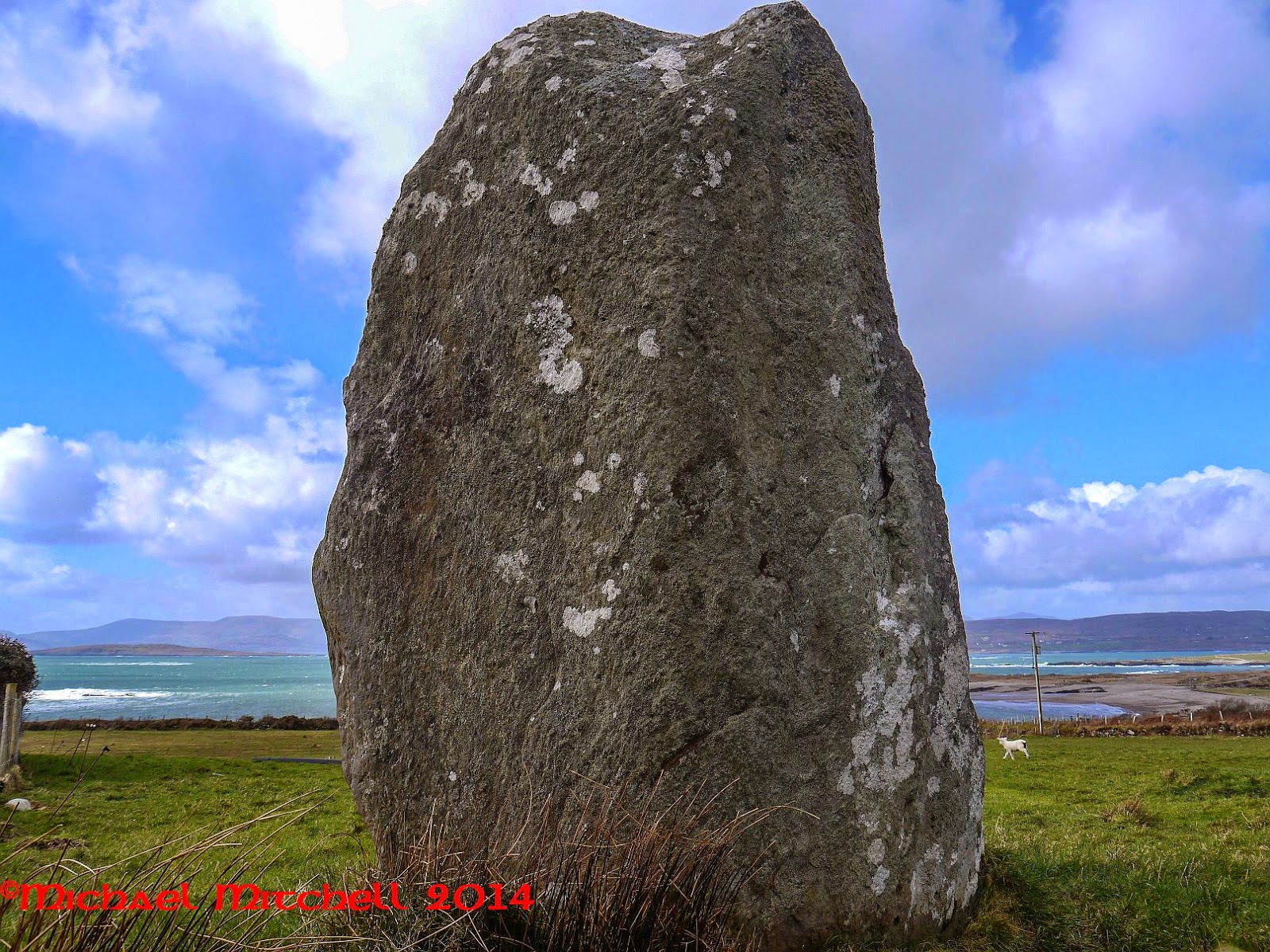 The largest and nearest stone is a massive 2.8m high x 2.11m wide and set NE-SW.
Further along the coast road is Trevara Strand. We park up down here and I get permission to wander over and see the stones at Ardacluggin. It's a soggy walk over to another massive stone. Once again, the Sheep show an interest and I have a whole flock following my every move.
The stone is 3m high x 2,25m wide x 0.35. According to the NMS it is a recent addition - being put up around 1955. The OS have it marked as a standing stone. Unfortunately, I haven't been able to find out any more details about it
Another stone nearby stands against the field ditch. This one is 2.9m x 1m x 0.55 and is set NE-SW. It's all a bit confusing..... 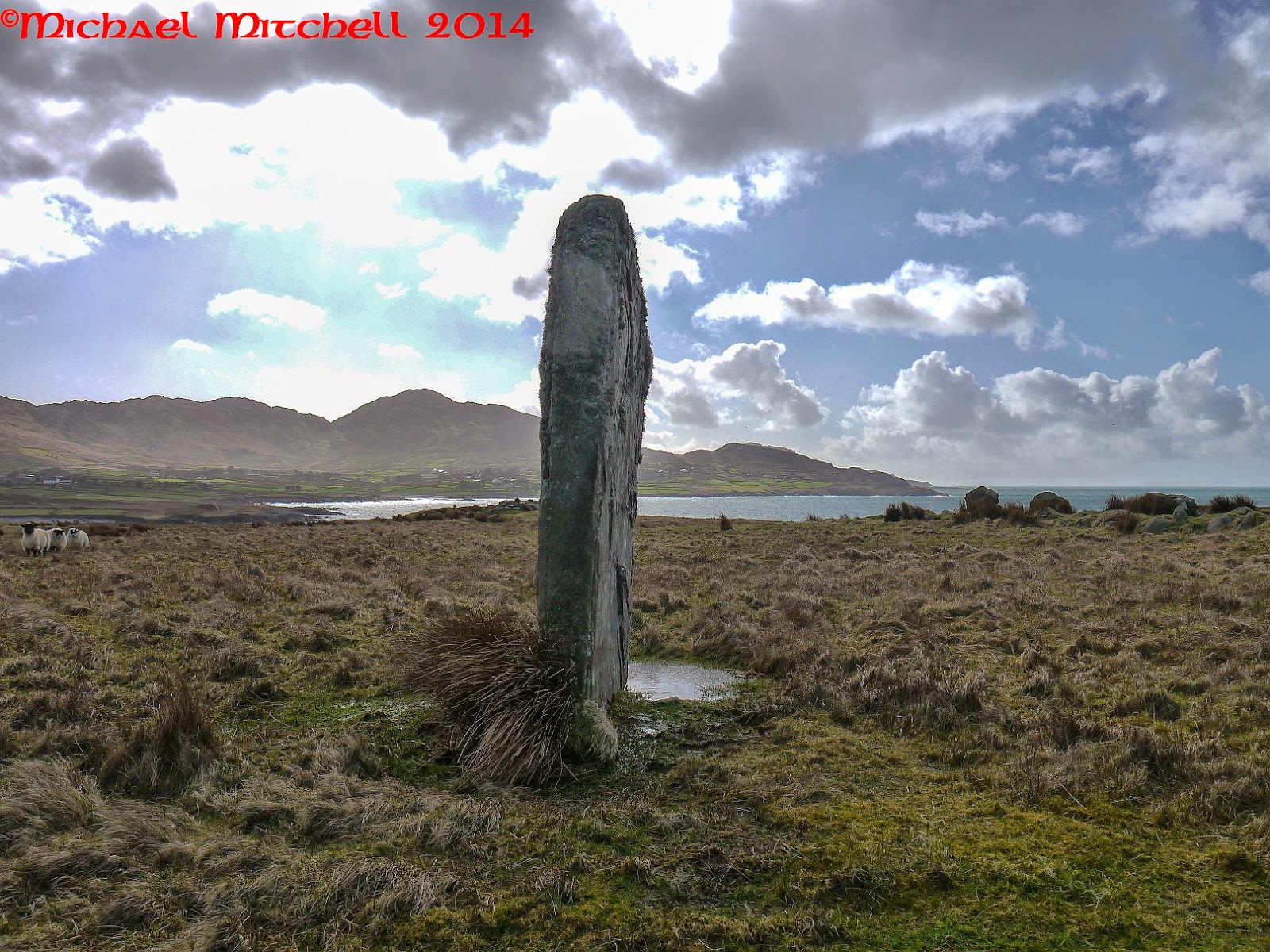 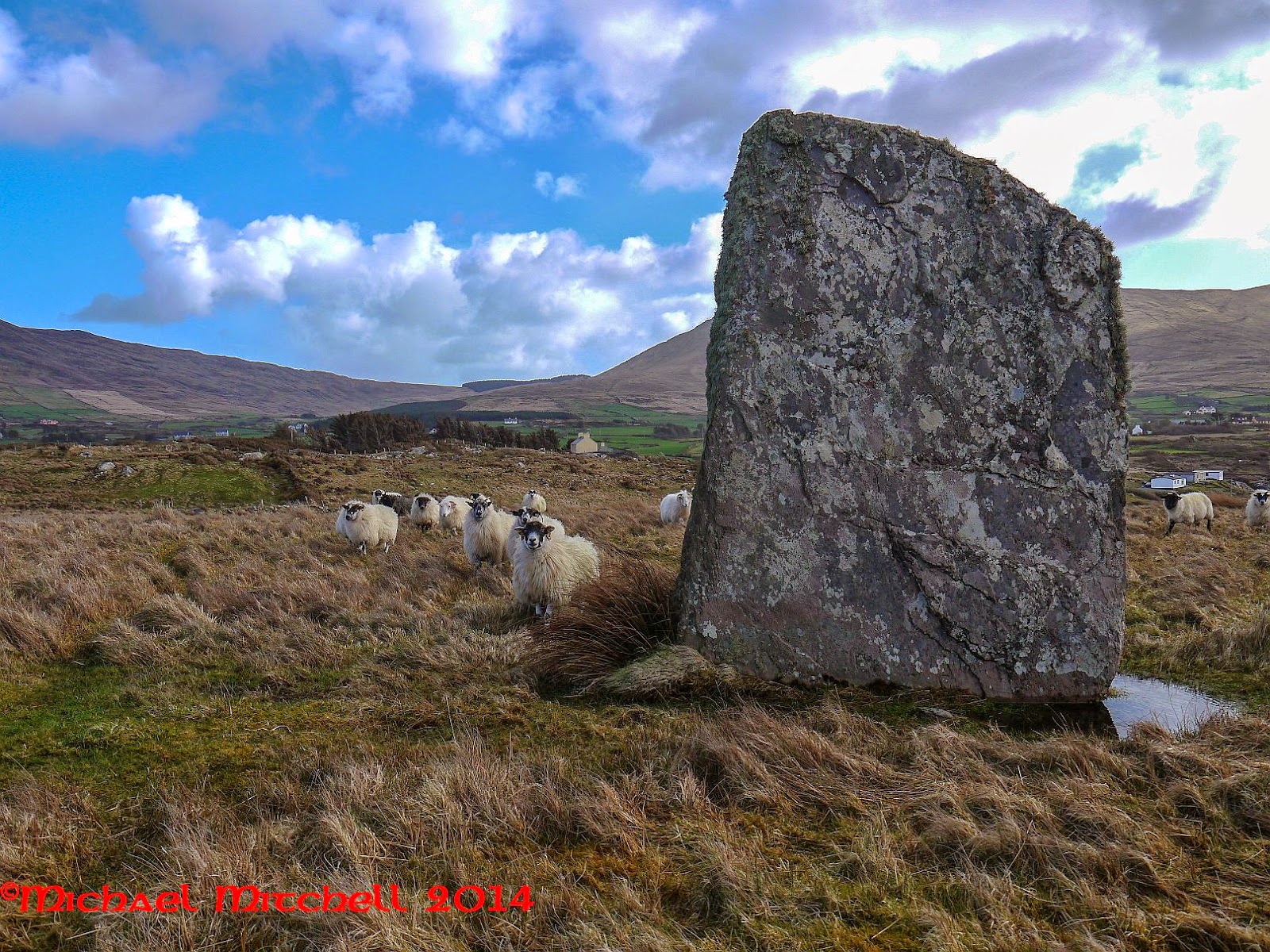 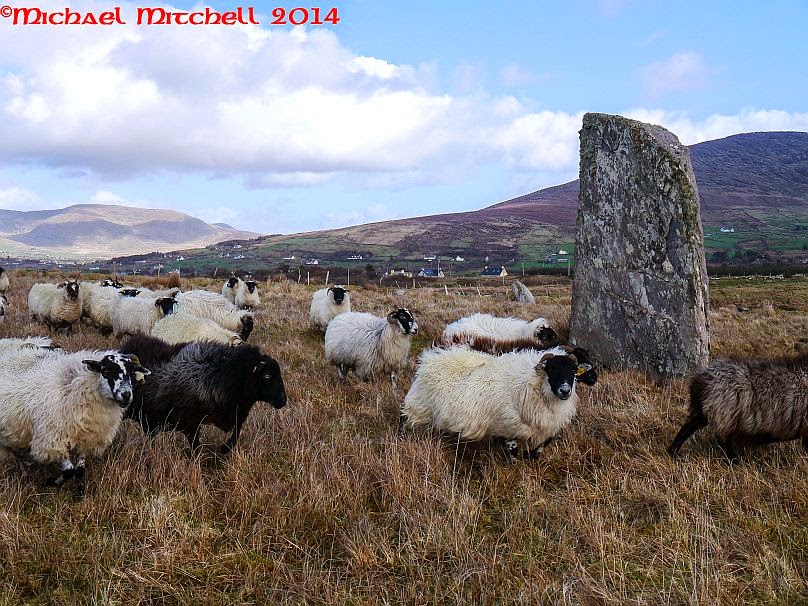 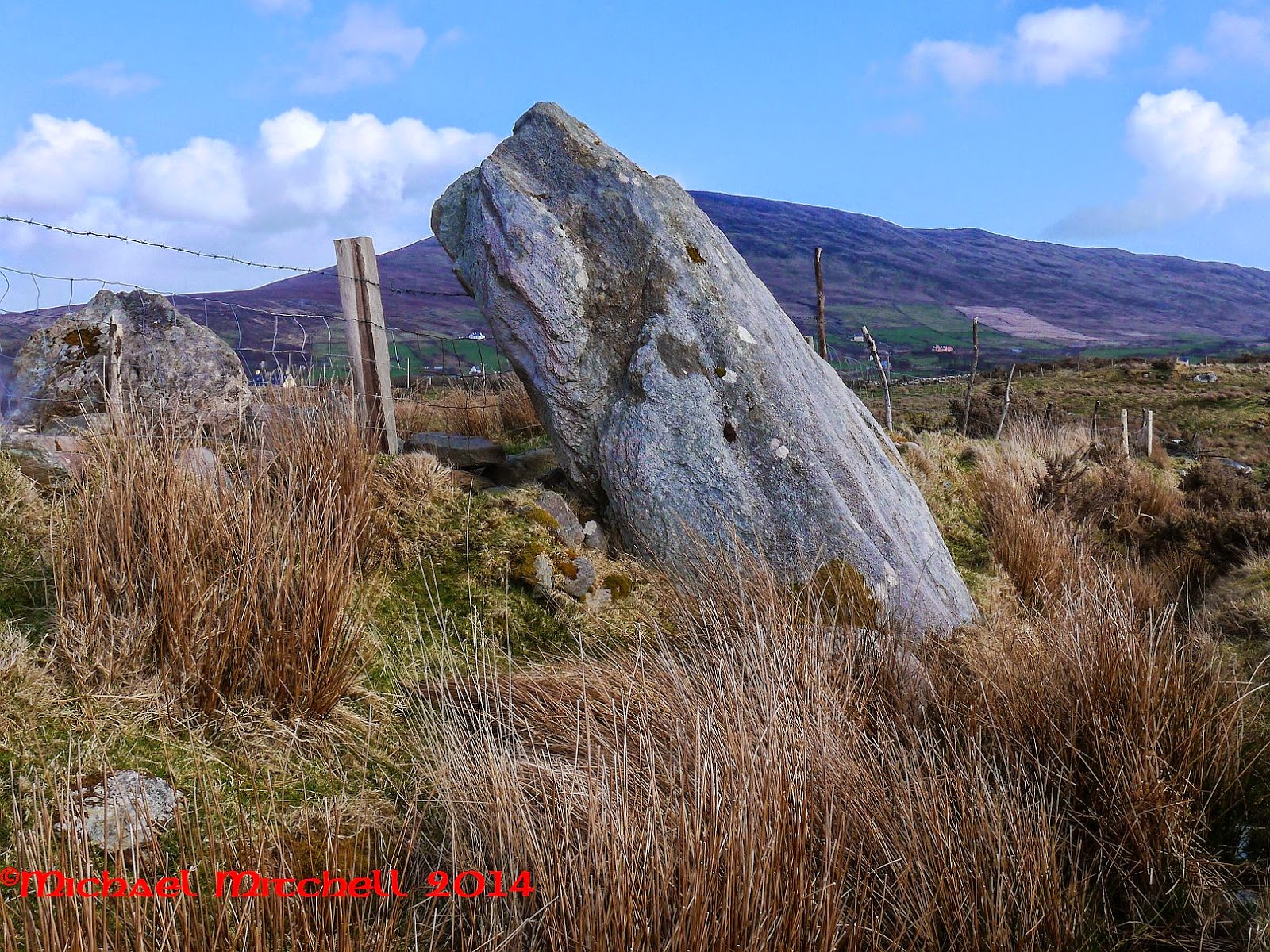 We carry on through Allihies and Cahermore, with a brief stop at the quay in Cahermore. There standing on the edge of the quay, is our second Glaucous Gull of the day. Another 2nd year bird. A Peregrine makes a flyover, whilst we watch the gull.
As usual,time is getting on, so we head back through Castletownbere and Adrigole. We stop for a quick look for Seals in Adrigole Harbour before heading home, and sure enough, there are several laying on the rocks in the bay. 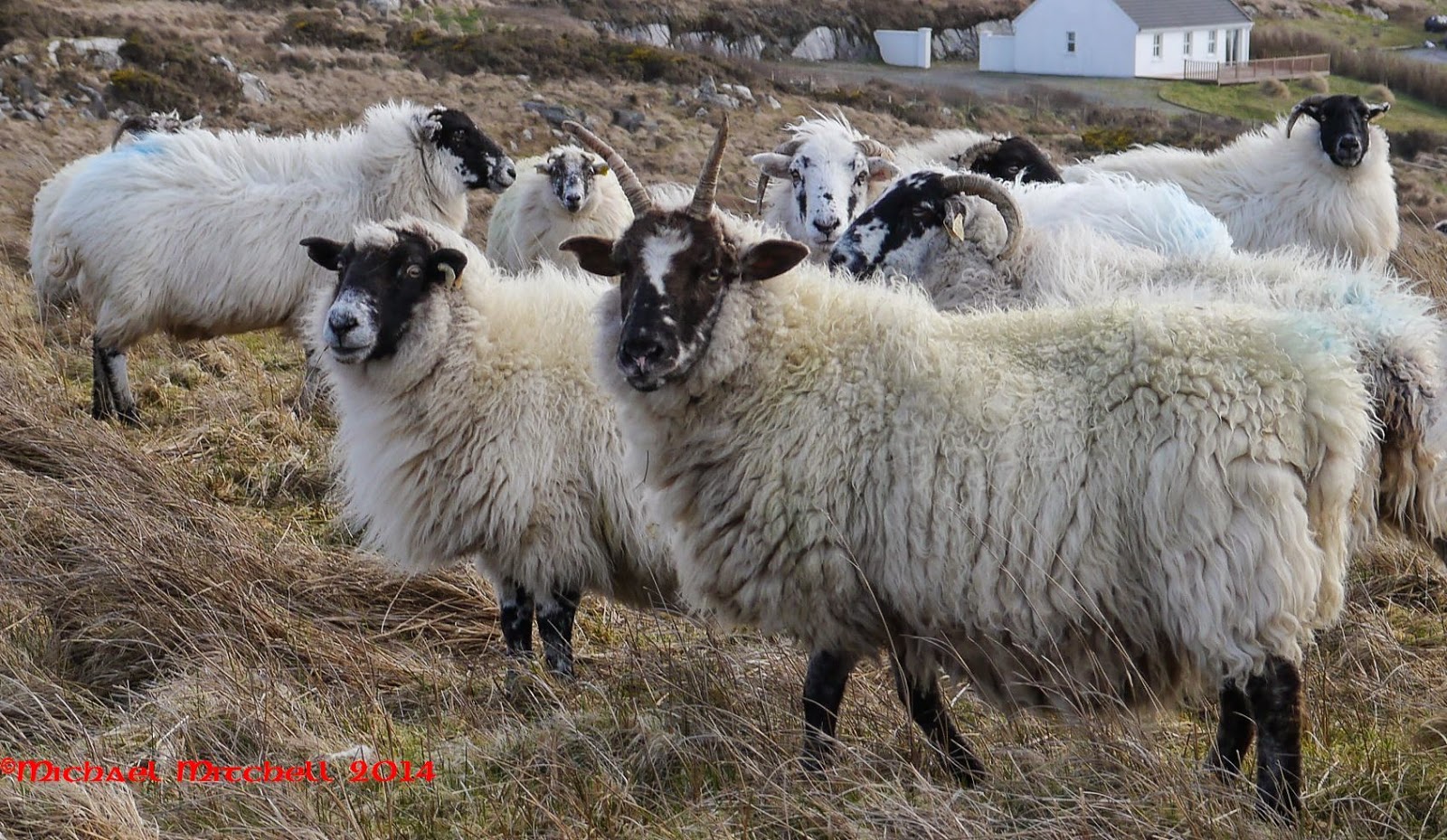 Posted by Michael Mitchell at 21:17