Ben Macdui. One from the archives !

Here's a walk that I did back on the 16th August 2005 and would love to do again one day.
The starting point was the Coire Cas car park at the foot of Cairn Gorm near the base station (NH989063). This is a popular place, for day trippers wanting to take the Funicular Railway up to the summit station. But at 7 O'Clock in the morning I am the only one here.
The sun is shining as I head South West from the car park, following a well worn track towards The Lurchers Crag (Creag an Leth-Choin). The going is quite easy as I cross a few small streams.The big cliffs of Stob Coire an t-Sneachda and The Great Slab, a favoured climbing spot, are over to my left. I start to ascend in more of a Southerly direction up Miadan Creag an Leth-Coin .The spectacular  Lairig Ghru comes into sight. This great valley divides the Eastern and Western Grampians.

Looking across the valley, I can see the the clouds brushing the tops of Braeriach, Carn na Criche, The Angels Peak (Sgor an Lochain Uaine) and Carn Toul (Carn an t-Sabhail). Despite the fact that it's August and the Sun is shining, there is still some snow laying on the side of Braeriach.


The going is still relatively easy, marker cairns line the track as I pass Lochan Buidhe. The great rounded dome of Cairn Gorm comes into view away over in the distance. I'll be heading that way soon !
The mist comes down as I reach the boulder fields on the approach to Beinn Mac duibh. The wind has picked up into a fierce South Westerly the higher I go.
Even with the marker cairns, it's not so easy now with visiblity restricted to 50 yards or so. I can hear Snow Buntings calling somewhere in the mist and there, out of the gloom I see the summit cairn and trig point.
At 1309 metres (4296 ft), Beinn Mac Duibh is the second highest mountain in the British Isles and I have it all to myself. It's now 9:30, two and a half hours to get up here... not bad !


Sheltering from the wind, I sit and have a sandwich and a drink and watch the Snow Buntings that I had heard earlier, as they flit around the rocks. I count four in total.
My next target is Cairn Gorm, so I have to back track a little down out of the gloom to Lochan Bhuide, before heading over to Carn Lochan and following the ridge at the top of the steep cliffs past Stob Coire an t-Sneachda. there are great views over to Loch Avon and all of the big hills further West.To the East is a vast expanse of hills, forests and Lochs.


Up until now, I've been the only walker, but as I near Cairn Gorm, it starts to get busier. There's one last push up Cairn Gorm, another 4,000 footer at 1245 metres (4085ft).The summit cairn here is packed.It's now 11:50 and there's a weird mixture of serious walkers out hiking and tourists who have come up on the railway. I have to wait a little while to get a peopleless photo of the summit cairn, before making my way down through the ski fields and past the grazing Reindeer.

I'm back at the car  by 13:15. All in all a very satisfying twelve and a half mile walk over a really wild sub arctic tundra landscape, with breathtaking views. I would have loved to have seen a Ptarmigan up there, but you can't have everything. I have bagged my first two Munros !
Looking back through my diary, a return visit has to be on the cards. 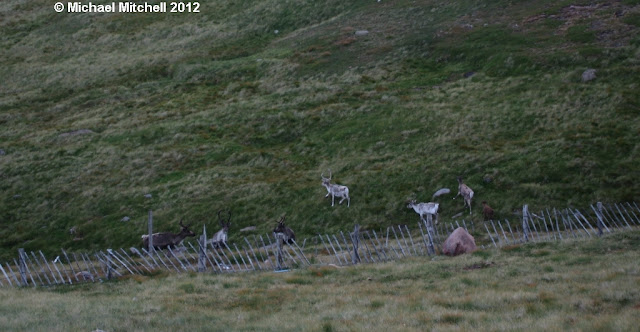 Posted by Michael Mitchell at 19:17