Blown away on The Paps

The alarm goes off at half 7.... I've hardly had any sleep, but drag myself out of bed. Joanie gets up as well and makes me a morning cuppa.
I'm actually out of the door at 10 past 8 and on my way to The Paps of Anu.
First things first though.... my fuel light has just come on, so need a garage. But I need money first.... so the cashpoint in Bantry is the first port of call. It's Friday it's market day... all the traders are setting up shop around the square, as I head to the Bank for some euros. Next stop, the first garage that I come across, which happens to be just outside town.
Now I can actually get going properly ! I Think I'll go kealkill way, then Ballingeary and Inchigeela, through Macroom and down the N22.Through Ballyvourney, (where the daffodills line the roadside), until the Clydagh valley turn off, where I check the map. I've had a couple of glimpses of the hills and they look snow capped,but the sky is blue and the sun is shining down glistening on the Paps.

Pretty soon I am at the parking spot by the barn, changing into my boots.
Through the first gate and up the track. There are two more gates to go through, then it's time to start the steep climb up through the heather. It's slippery as hell and hard going to start with, but levels out as I make the first crest. I veer left a little to head up the next steep heathery slope. Tracks come and go..... I flush a Red Grouse,it gives that familiar call as it flies up and dives into the distant heather. Up,up and up, until the nipple of the Eastern Pap comes into view. I am now at the snow line and it's getting deeper and deeper. The wind is also picking up, gradually turning into a fierce North Westerly.

At last I reach the top, barely able to stand in the now, ferocious, unremitting wind. The camera is shaking in my hands, making it hard to take photos of the Eastern cairn. The views however are tremendous, Counties Cork and Kerry in all their splendour. The higher hills all round are all capped with snow .... Magillycuddys Reeks glowing in the suns rays, away in the distance.
I head down to the col between the two hills, surprisingly,only managing to slip over the once. There is a small stream to cross at the bottom, which is no problem.

The weather is now taking a turn for the worse as the skies turn dark grey, and hail turns to sleet, which in turn, turns to snow. The snow already on the ground is getting deeper and deeper the higher I get. Luckily there is a line of granite rocks... a sort of processional way to guide me to the top.
It's even more slippery going up the Western Pap and I slip once more ! A Raven calls overhead letting me know that he's there and It's not long though before I'm up at the summit.... in blizzard conditions. The snow and low cloud comes down causing a complete whiteout.

The Western cairn looks in better condition than its Eastern counterpart, but comparisons aren't easy when you're being battered by the elements. A few photographs and I am heading back down. It's definitely not the best of conditions to be lingering on the tops today.
Back down to the col and then contour round the hill to save climbing back up unneccesarilly. The weather is improving again and the sky is a brilliant cobalt blue once more.
I'm not looking forward to the steep slope down, so I end up going back a different way, more to the right (as you go down) and down the fire break, which turns out to be a lot easier. 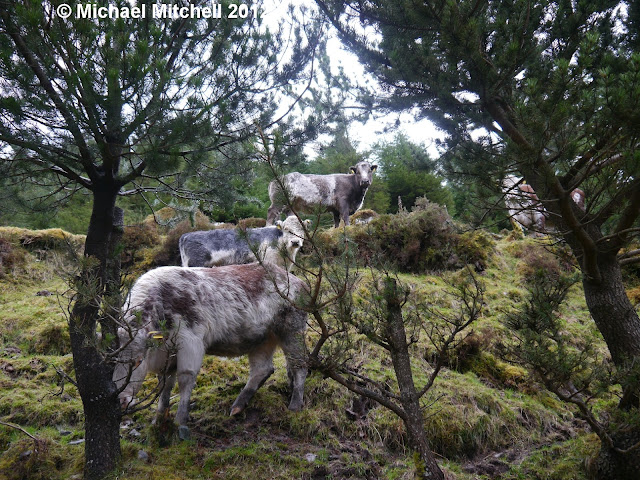 Three and a half hours after setting off up the track, I am back at the car, soaked but happy, as another Raven calls overhead to welcome me back.
I have always loved driving home after a long walk, it relaxes me in a strange sort of way.
Heading back through Bantry, the market traders are still trading in the sunshine.... chatting away, they all look happy. Fifteen minutes later I'm pulling up at home.
J has made peanut butter cookies, so, a cup of tea, a couple of solpadeine and a cookie or 3.
the sun is shining, the sky is blue......... It's a beautiful end to the day.
Posted by Michael Mitchell at 20:54

Email ThisBlogThis!Share to TwitterShare to FacebookShare to Pinterest
Labels: Paps of Anu