19th February 2012
We hit the road later than planned today, so the original plans are out of the window and it's going to be one of our magical mystery tours !
The sun is shining, and it's just like a Spring day as we head off down our lane.
I do have one place in mind to start at and that is the Standing Stone at Bawnishal.
It's not far from Skibbereen, so shouldn't be too difficult to find... surely !
Heading up Marsh Road and out of town, there's a crowd gathered up by Ballyhilty Bridge. The makeshift signs tell us that there is a road bowling match going on ! There doesn't seem to be much action mind you and we don't actualy see any balls being bowled by anyone. I think that we must of  turned up at the tail end of this one.
Carrying on up the lane, I'm looking for a right turn, but, not realising that I should have been looking for a left one !
We get there in the end and there in the field ahead of us is Bawnishal Standing Stone. It's a big one, over 3 metres high. Set near the field edge by the roadside, but it's difficult to actually get very close. The hedge is made up of every prickly and thorny plant that you can think of and the field is electrified. Nevertheless, it is an impressive stone.
Next stop is going to be Drumduvane. a megalithic tomb in the middle of nowhere between here and Drinagh. We get a bit distracted on the way, by a big stone on a hill and pull into a farm driveway. This one's called Coolnagarrane, but we can't figure out how to get any closer. There's a myriad of electric fences between us and it, so a couple of long distance photo's have to suffice.
We manage to find Drumduvane, but not the tomb. Just a field full of gorse and brambles. Have to give up on that one and instead head for the Standing Stone at Shronacarton, near Clodagh.
Easy to find, just down the lane off the R586 outside Drimoleague.
We park up by a track and wander back down the lane with another impenatrable hedge. I head back down the track where we are parked, jump over the gate and there is an easy way into the field.
Another nice stone, it's a rectangular block, two metres high and one and a half metres wide set on a North East - South West axis. Set up on a hill, there are good views in all directions.
We are going to head for Inchincurka Wedge Tomb next, so head to Dunmanway and take Castle Road out, following the lane towards the Shehy Mountains.
Joanie spots two more stones en route... the first in a roadside field to our right, in the townland of Derrynasafagh. It's only a small rectangular stone, wider than it is tall. Apparently there are a number of stones in this Townland.
The next one is just as we near Derrynacaheragh. Again, it's in a roadside field to our right. This one is not very impressive at all really. Sitting on the far side of the field, it looks quite small at one and a quarter metres in height. I'm surprised that we even noticed it at all !
As we get to the other side of derrynacaheragh, there's another game of road bowls going on... must be the day for it !
We veer off left and take the other road up to the R585 so as to avoid interupting the game. From here it's plain sailing, counting the left turns until we reach the sixth left and there it is, nestled nicely in the field... Inchincurka Wedge Tomb.
The field gate is open, so I wander in and over to this lovely wedge tomb. It's in pretty good condition. Aligned East - West. Two portal stones at the front, four slabs one side and five the other holding two large flat capstones. One of which has several cup marks.


Next up is the ruined Stone Circle at Coolmountain. Its up a lane the other side of Farrannahinneen. A left and a right, up the lovely wooded valley of the Caha river and you will see the two remaining stones in a field to your right.
Parking is easy. Access isn't too bad, if you don't mind stepping over a barbed wire fence.
As I said earlier, only two stones now remain of this multi stone circle. It is thought that would have originally been eleven.
A  hawthorn tree is growing up beside one of the stones. This would have been an absolute belter of a circle if it were still in tact. Nonetheless, it is still worth a visit. It's setting in the field. with the Caha running one side and woods all around is magical.
There are a number of large stones in a corner of the field, now overgrown with bracken and brambles. Probably just field clearance but may contain remnants of the circle.


Next, we head out through Coolmountain townland, down a lane that gets narrower and narrower as the potholes get bigger and deeper and we're both relieved to emerge the other end and see the R585.
We're now heading towards Kealkil, never been down this road before... very picturesque indeed, between the  Maughanaclea Hills and The Shehy Mountains  and there at Cousane Gap, in a field on the right hand side, where the minor road goes off, is another Standing Stone.
This one is Cousane Standing Stone. A large rectangular block, just under 2 metres tall and about a metre wide. Again it's not marked on the OS map, but is mentioned by Jack Roberts and on the National Monument Service website. It's aligned North East - South West and has commanding views of the valley and way beyond to the big hills of The Caha range. This is an area rich in megalithic monuments, with the circles of Cousane and Maughanaclea close by, as well as numerous standing stones. A future visit is already being planned in my head !
Time is getting on now, so we head  into Kealkil and towards Bantry.
Another big crowd, and yet another game of Road Bowling going on. There is so much traffic, that people are having to direct the cars through. I'm surprised that they find any time to actaully do any road bowling. In fact out of all three of the games we've seen today, we haven't seen a single ball thrown or bowled. Just a lot of men excitedly lining the streets. 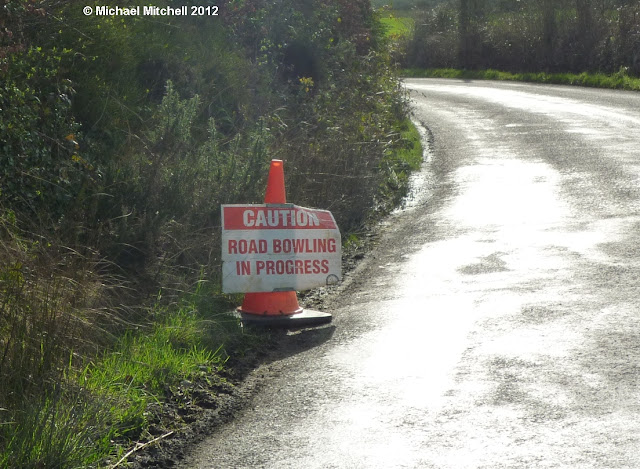 Posted by Michael Mitchell at 18:49