Three Circles and a Hen Harrier

Wednesday 1st February 2012
Up really early today....half six ! Got a lot planned, places to go, circles to see and all that !
So at around eight o'clock I'm off, heading for County Kerry. The weather forecast is good.. sunny but cold. It's still a little misty at this time of the morning, as I head  towards Bantry. Soon I'm heading over the Caha Pass, looking for the left turn at Gortnabinny Bridge that will take me across and out to the R571. Somehow I manage to end up on the left fork.... the road narrows and gets worse ..and worse and even then worse as the road turns into a track heading through a gate and into a field. That's enough for me,though now I've got to reverse round bends with drops and ditches either side. This has got to be the worst and scariest road ever ! Luckily I manage to reverse into a gateway and turn and get the hell out of here. Believe it or not I pass three other cars on the way back out !
So back out where I started at Gortnabinny bridge....... no more short cuts for me today !

Take a left onto the R571 at Kenmare then after several miles find my turning to Gleninchiquin Park and Uragh Stone Circle. It's about 2 miles down a meandering road, past a small lough and off right, through a gate to the car park. There are sheep everywhere, they've just been fed here and one of them has very big horns ! But they are more interested in eating than anything else.
Get my boots on, and set off up a newly made path. There's an honesty box asking for €2 to go towards the upkeep of the path and the sites.
The track replaces the old wet & boggy route up the small hill where Uragh Circle is situated, between Lough Inchiquin and Cloonee Lough Upper. The views are terrific, the circle makers certainly knew how to pick their places. Knockagarrane, Knockreagh, Knocknagarreveela, Cummeenanimma and Coomnadiha tower all around.


The circle itself, is a five stone recumbent circle, with a massive standing stone directly behind the axial stone. The famous waterfall in the distance is in haze, so not showing too well. This is a place that you could spend all day just sitting soaking it all in.
However, I want to see the other Uragh circle... Uragh West. I know that it's on the hillside above Uragh Woods but not sure where or how to get there.
Luckily, the farmer is a little further up the track and stops for a chat. He walks up the hill a little way with me, pointing out the famine house and where the other circle is and giving me directions. He has put arrows up to help people.
Onwards I go, up the track, over the gate and following the signs, until I literally walk straight into Uragh West. There is a massive boulder burial in the centre. 8 stones of the circle are still standing, one of which has been incorporated into an old wall running along the Northern edge. There are 2 possibly 3 fallen stones and 3 small stones on the eastern side, which look like modern additions. There are also 2 more boulder burials nearby.

It's another lovely circle, not quite enjoying the views of the more well known one below, but set up here almost hidden, below Knocknagarrane.... it's like the circle that everyone forgot !
Hopefully the gorse won't become too invasive and bury it altogether.

Heading back to the car, I take one final look at Uragh before heading off for the third circle of the day !
Back to the R571 to Lauragh Bridge and left into a narrow lane. A slow drive looking for Drombohilly, which is supposed to be visible from the road. After well over a mile, I spot it up on the hill, amongst an infant forestry plantation. I carry on, looking for access, then turn and come back, then turn and head back in the original direction once more. I'm not sure, access looks a bit daunting. Turning and heading back once more I pull in and park up near Gowlaur Lough, by a green hut. Looking at the lay of the land, it looks best to head up Drombohilly Hill then work my way across.
I'm expecting it to be wet... very wet, going by all the field notes on the Modern Antiquarian. But they have all taken a different route than this, I think. This way is wet, sure, but easily negotiable.
Then it happens !!!! I am half way up the hill, when POP, my calf muscle rips... It hurts and it hurts a lot ! Shit ! I am now wondering whether it will walk off, so I carry on.... each step hurts.
Then I see something up and run in front of me.... a Brown Hare runs through the heather and disappears over the hill. Next, I look up and a male Hen Harrier flies by... things are improving, but not my leg unfortunately. I come to a barbed wire fence, which is easily stepped over. I am sure that the circle is just over the other side of the hill.
Another fence.... this one I go under. A third fence, again easily negotiated as I slip between the barbed wire and the wire. This brings me out to a fire break/track at the edge of the new forestry.
I am expecting to see the circle but don't ! Its a bit discouraging. But I've come this far and the track looks easy.... at least until it veers off right, then a couple of really steep sections followed by deep wet peat, There are a few stones to help me through it, but it's hard going.
Eventually I veer off right across the long grassy area and over to the circle.
It's a fine circle, 9 tall stones standing and one fallen. There's a quartz rock in the middle, upon which people have left various offerings, coins, pebbles etc. I add my own, a rounded white quartz pebble, which I have been carrying around with me, and ask to get  back safely.
It's a great circle and really deserves more of my time, but I don't hang around too long, and I'm not looking forward to the walk back, but it goes ok, retracing my steps.. I am so glad to reach the car and set off for home. 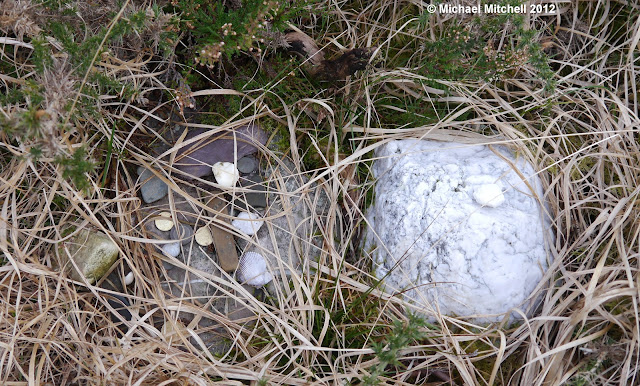 Driving isn't too bad... it doesn't hurt to accelerate, but it does hurt to brake !  Hopefully this won't be too much of a problem.
Pulling into the house, I am so pleased to be home, as I hobble in and explain whats happened. Tea, sympathy and reiki !
I've a feeling that I could be out of action for a little while ! But that will give me a chance to write up old notes and walks...... 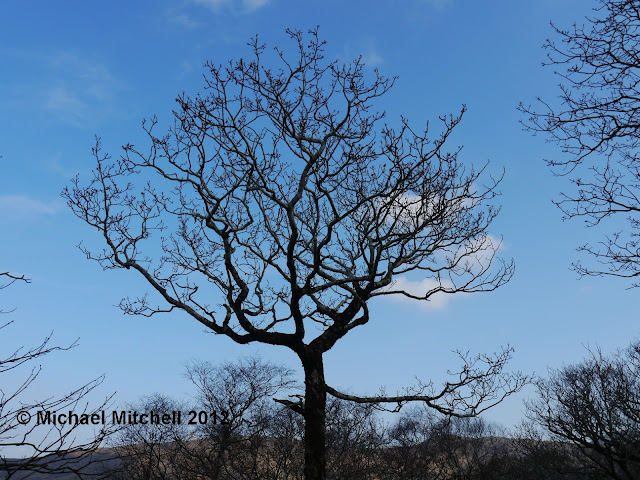 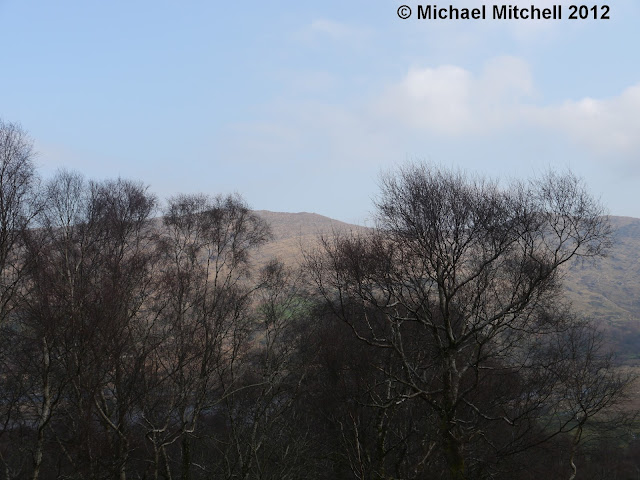 Posted by Michael Mitchell at 01:46