22nd December 2013
Another day of sunshine and showers. We are heading up the Coomhola valley and through the lanes for a return visit to Maughanasilly Stone Row.
The ground is fairy wet after all the recent wet weather as we splash our way up the hill to the row. The sun is low in the sky, casting long shadows from the stones.
Set on the NW slopes of Knockbreteen There are great views to Knockboy, with it's dusting of snow in the NW. Coniger to the NE and Lough Atooreen just SW.
Aligned NE-SW there are 5 stones standing, though the middle one has split and the fragment lies beside it. A further slab lays prostrate. 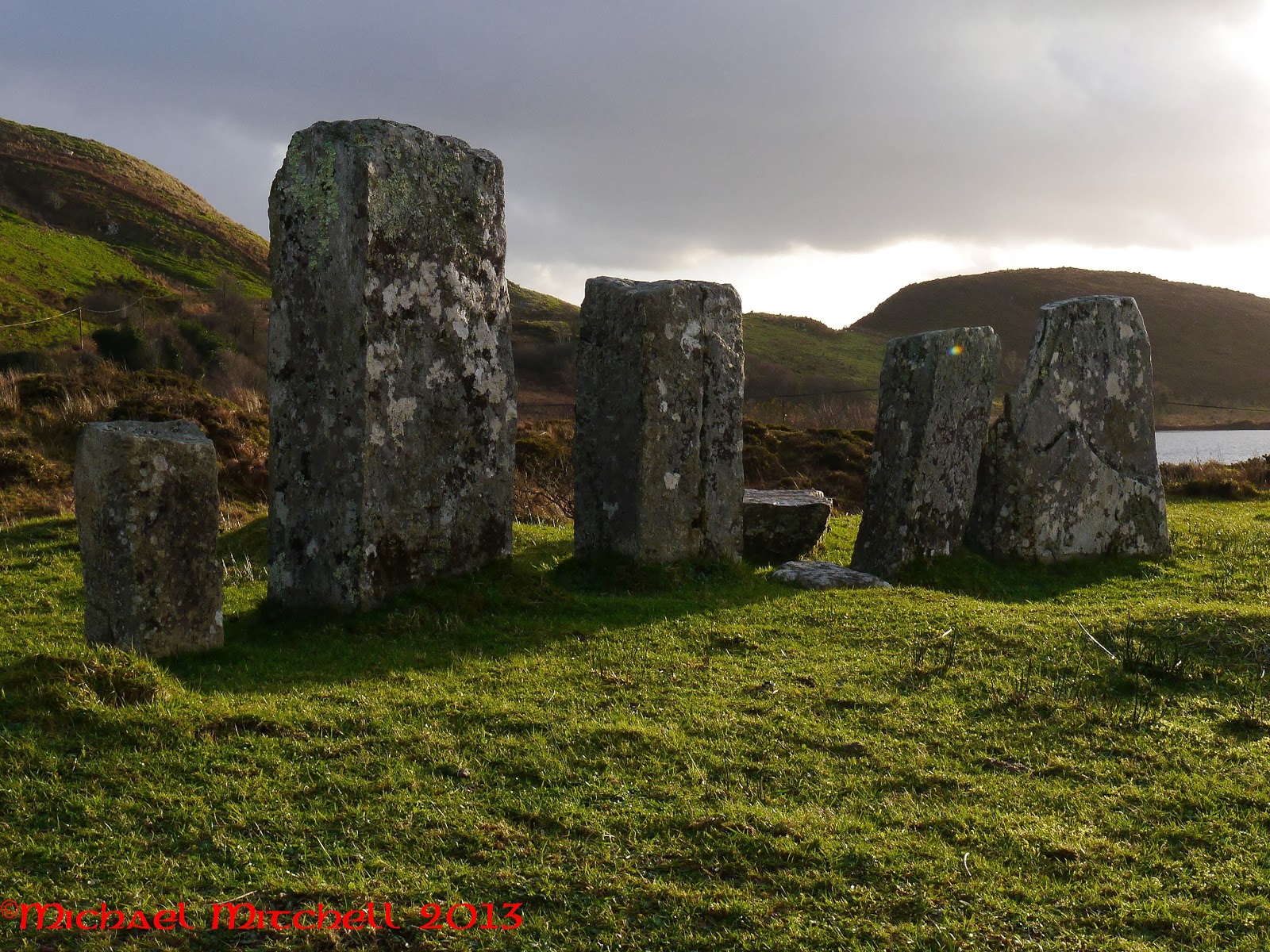 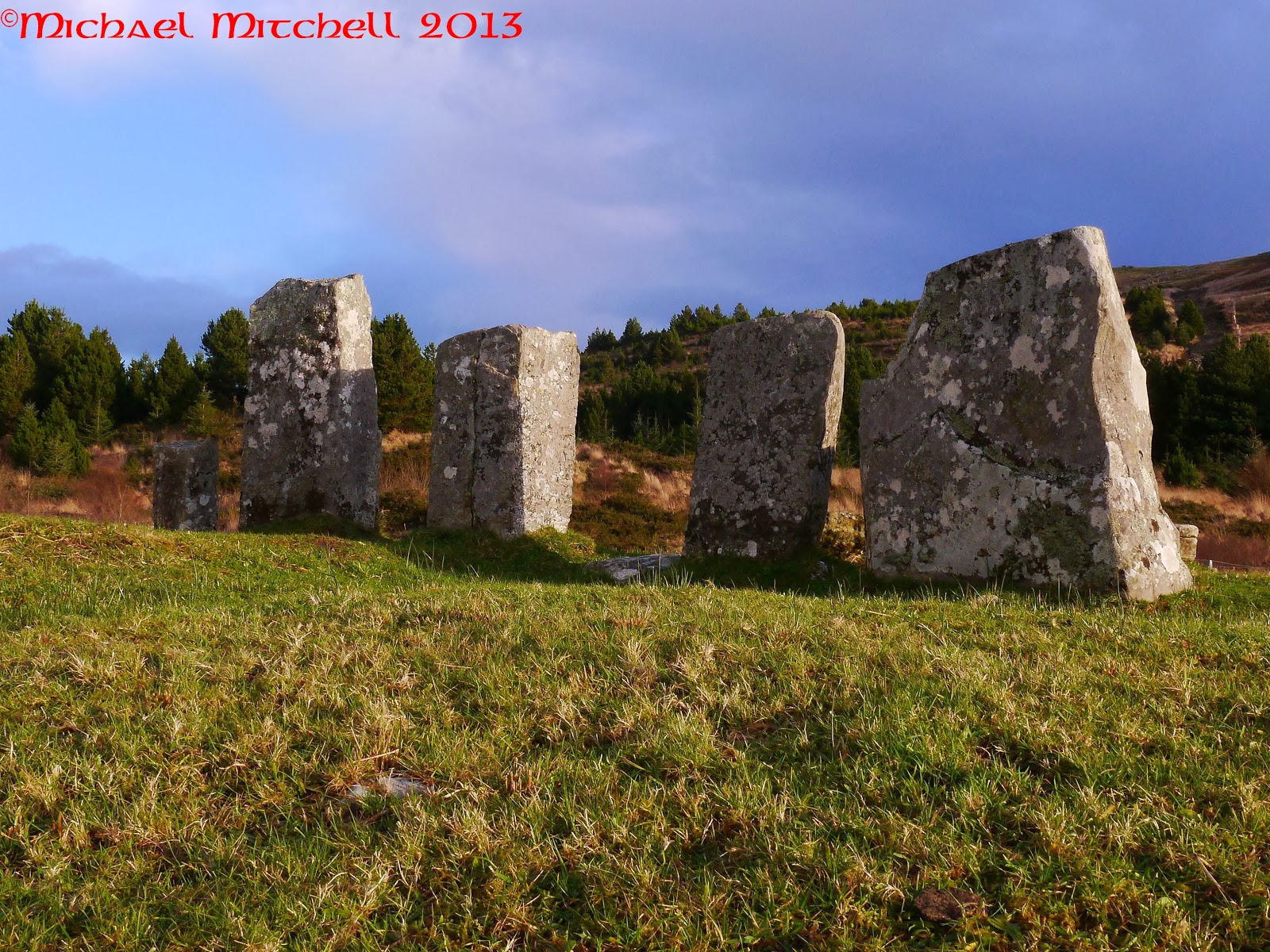 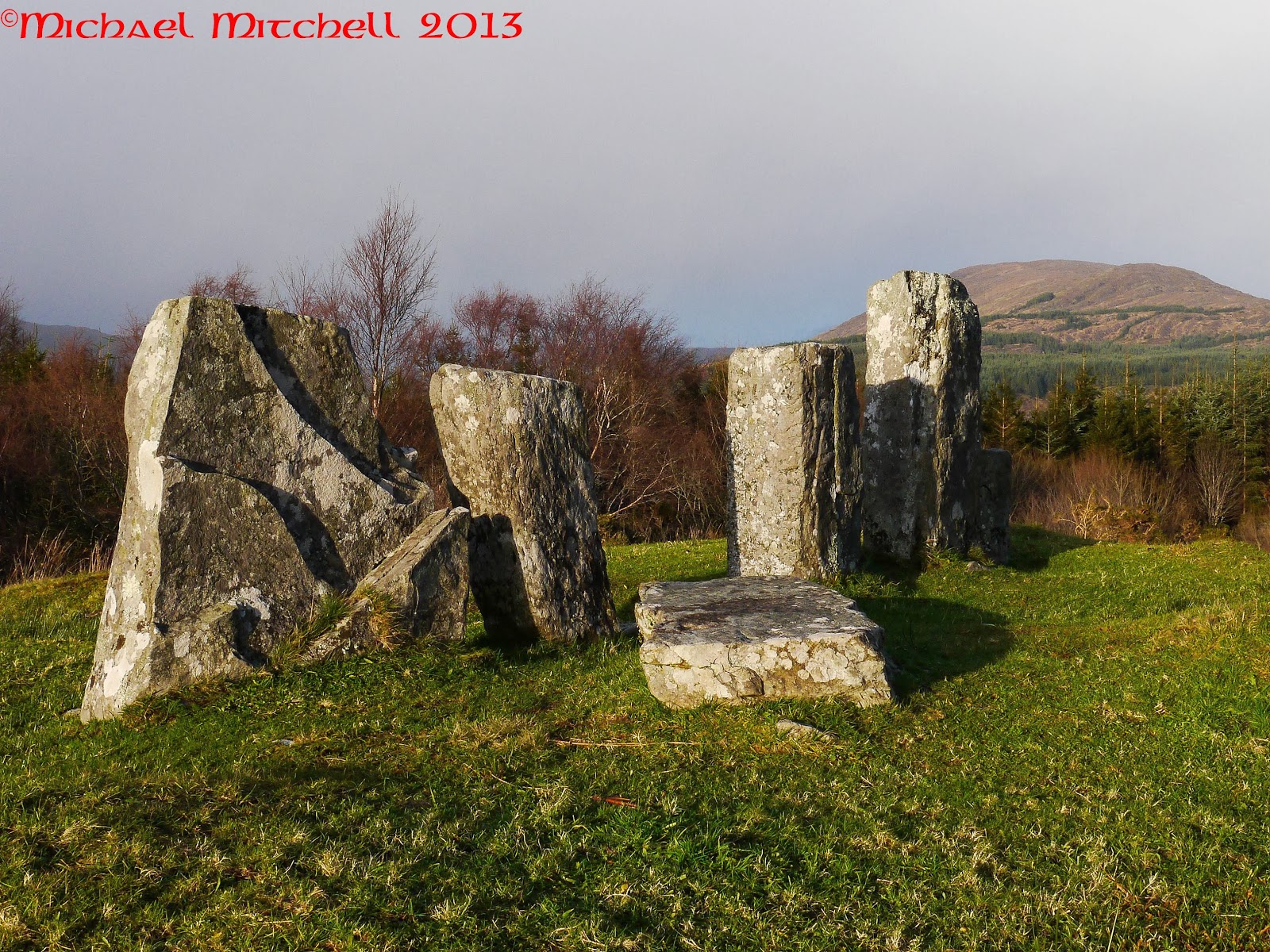 Jack Roberts states that this fallen stone was originally part of the row, though O'Nuallain thinks that it wasn't.
The site was excavated by Ann Lynch in 1977, the only finds being a fint scraper and a flint flake.
The stones range in height from 0.5m (at the NE), to 1.3m. Though the broken stone would have stood 2.35m and the prostrate stone,if part of the row would have stood over 3m. 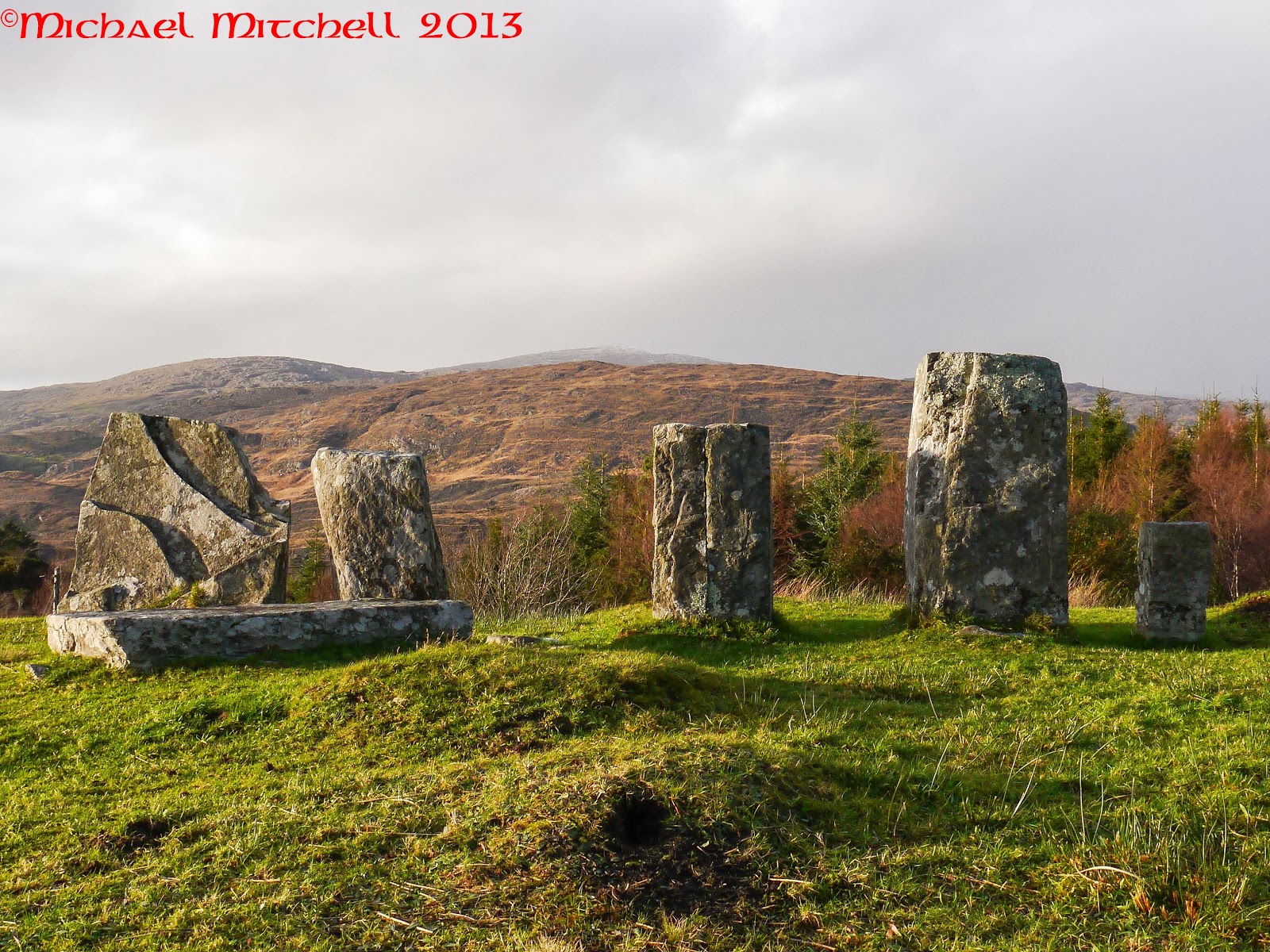 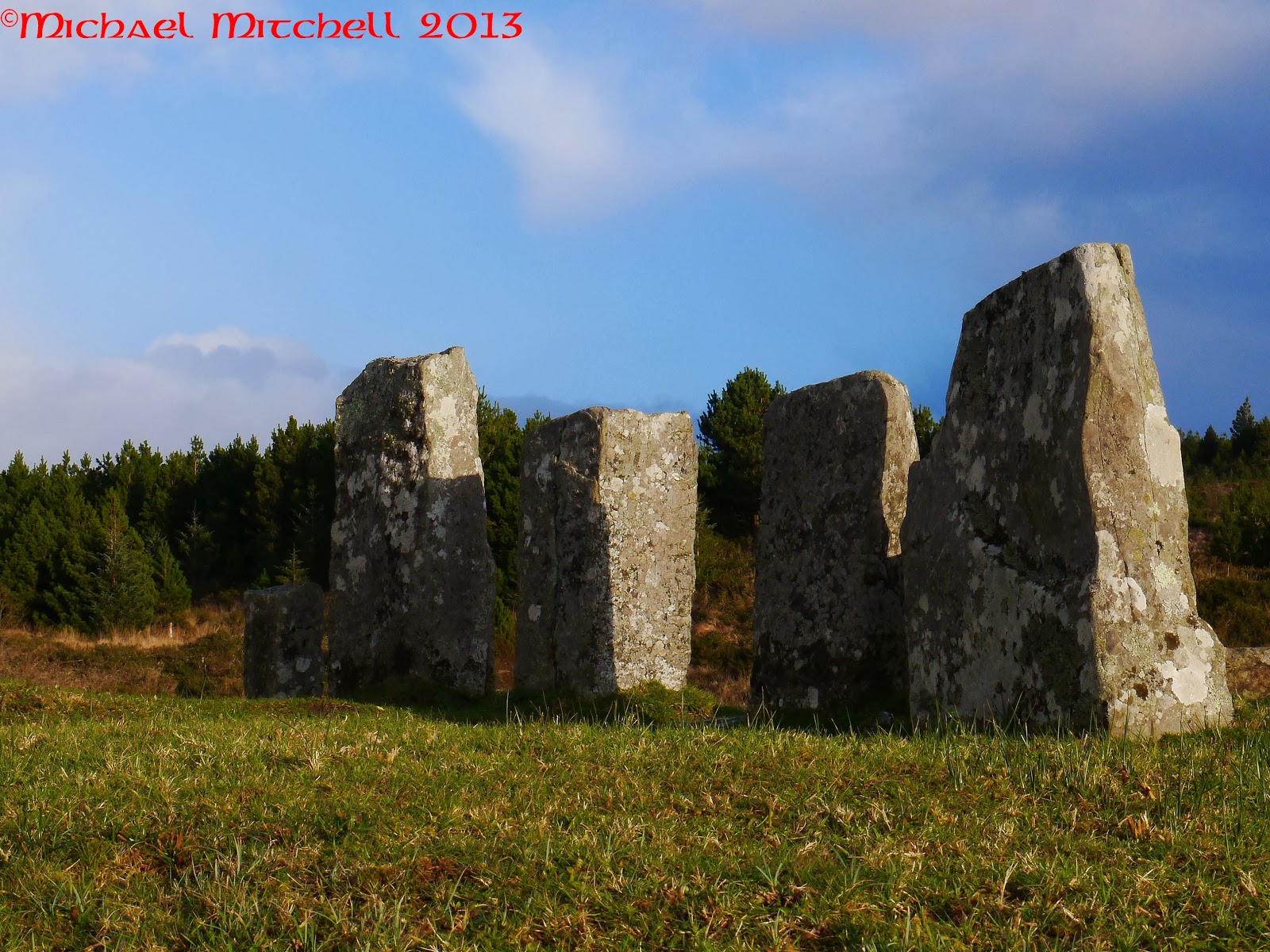 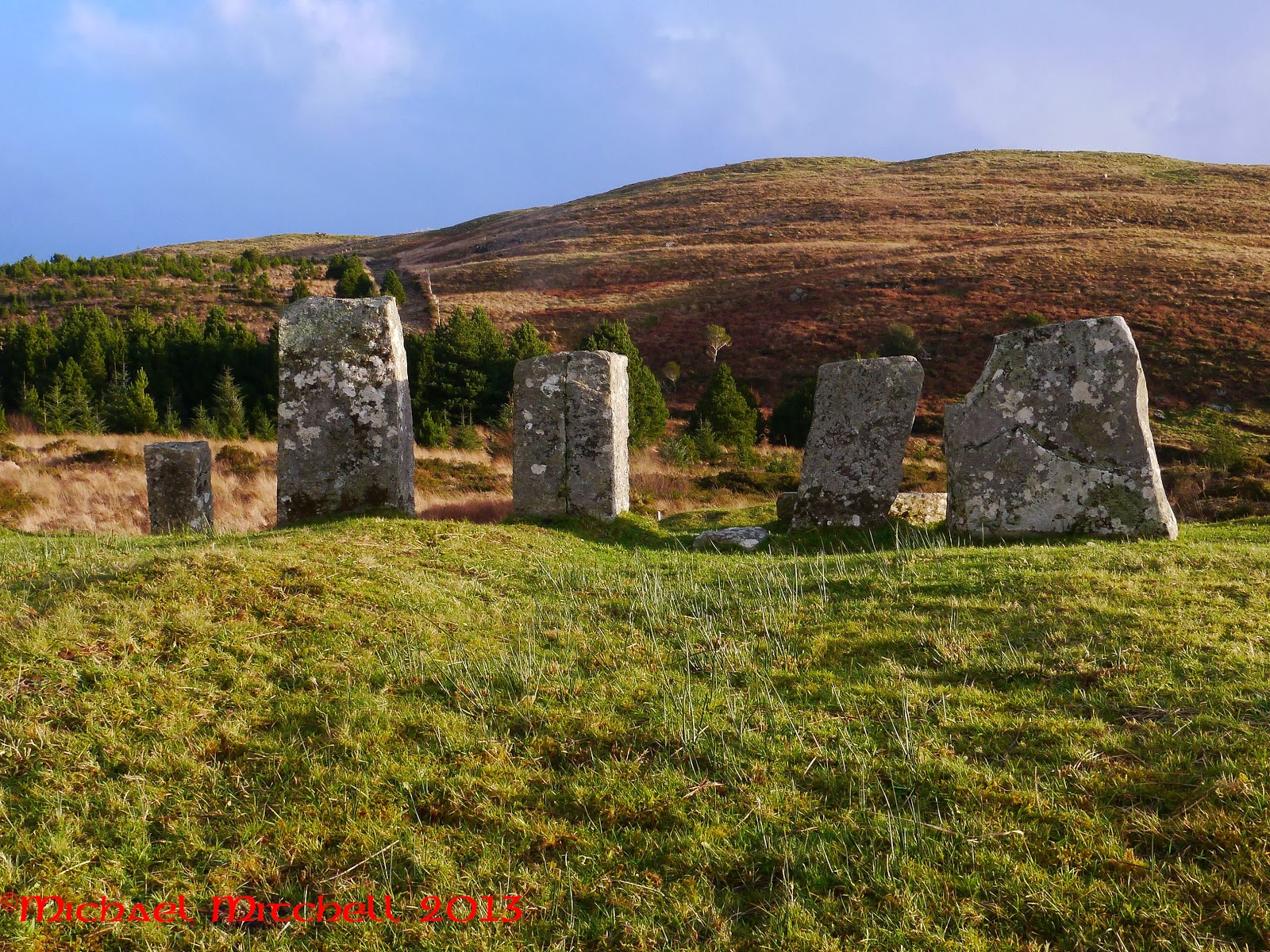 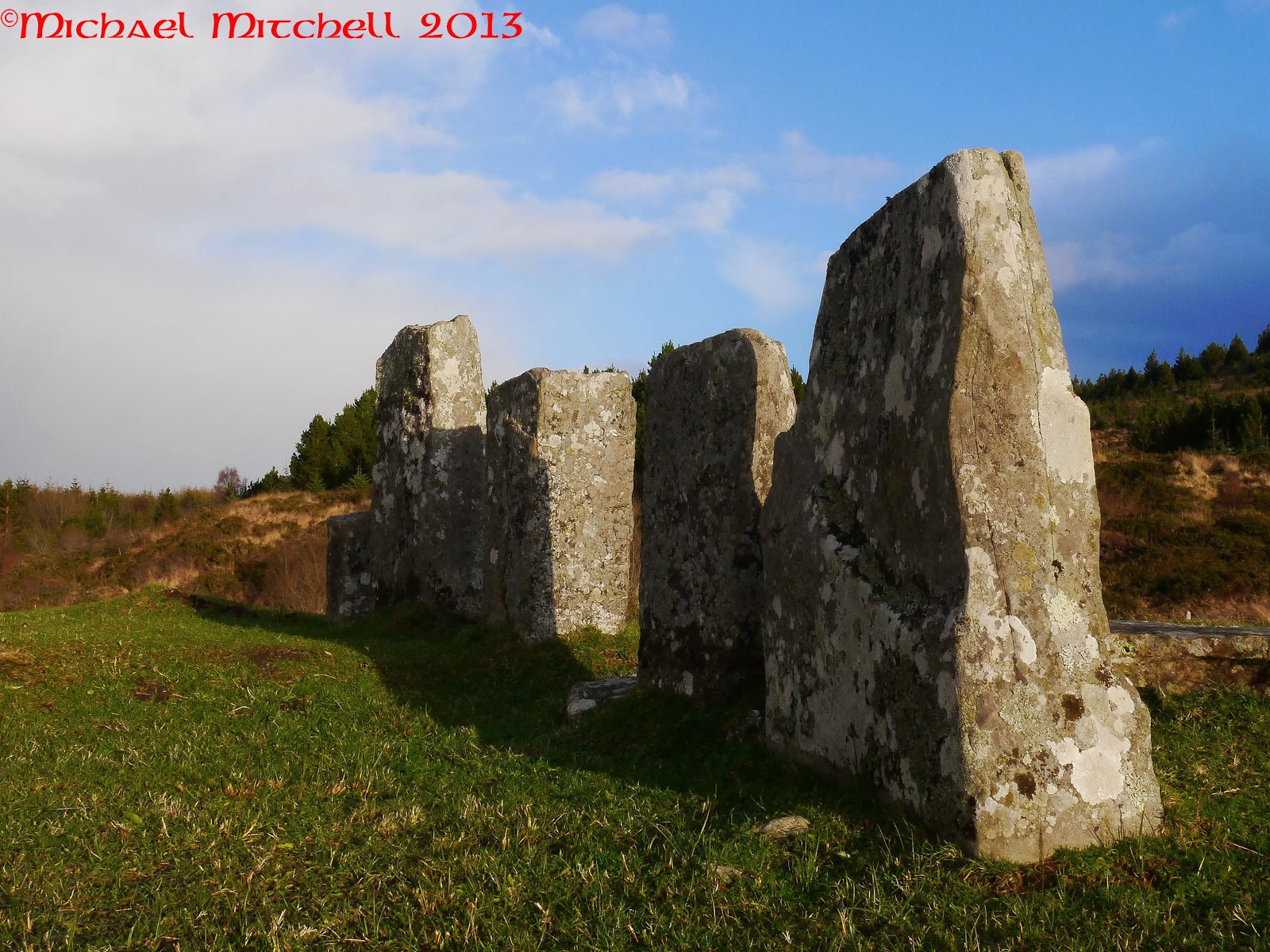 There is just about enough time to get up to Kealkill Circle before the sun sets, so we head down the lane towards and past Carriganass Castle and into Kealkill, before heading up the steep hill to the circle.
Parking by the gate, J decides to sit this one out. The track to the stile is wet and muddy, while the field itself resembles a marsh. Splashing my way over to the stones a Chough calls in the distance. The Sun comes out very briefly as I take some photographs.
This is such a great place. A radial cairn, a massive stone pair and of course the five stone circle.Situated at the Western end of the Maughanaclea Hills, an area rich in stones.
Once again, the views are stunning. The Sheehy and Caha Mountains. Bantry Bay, The Beara and Sheep's Head Peninsulas, even as far as Mizen Peak. 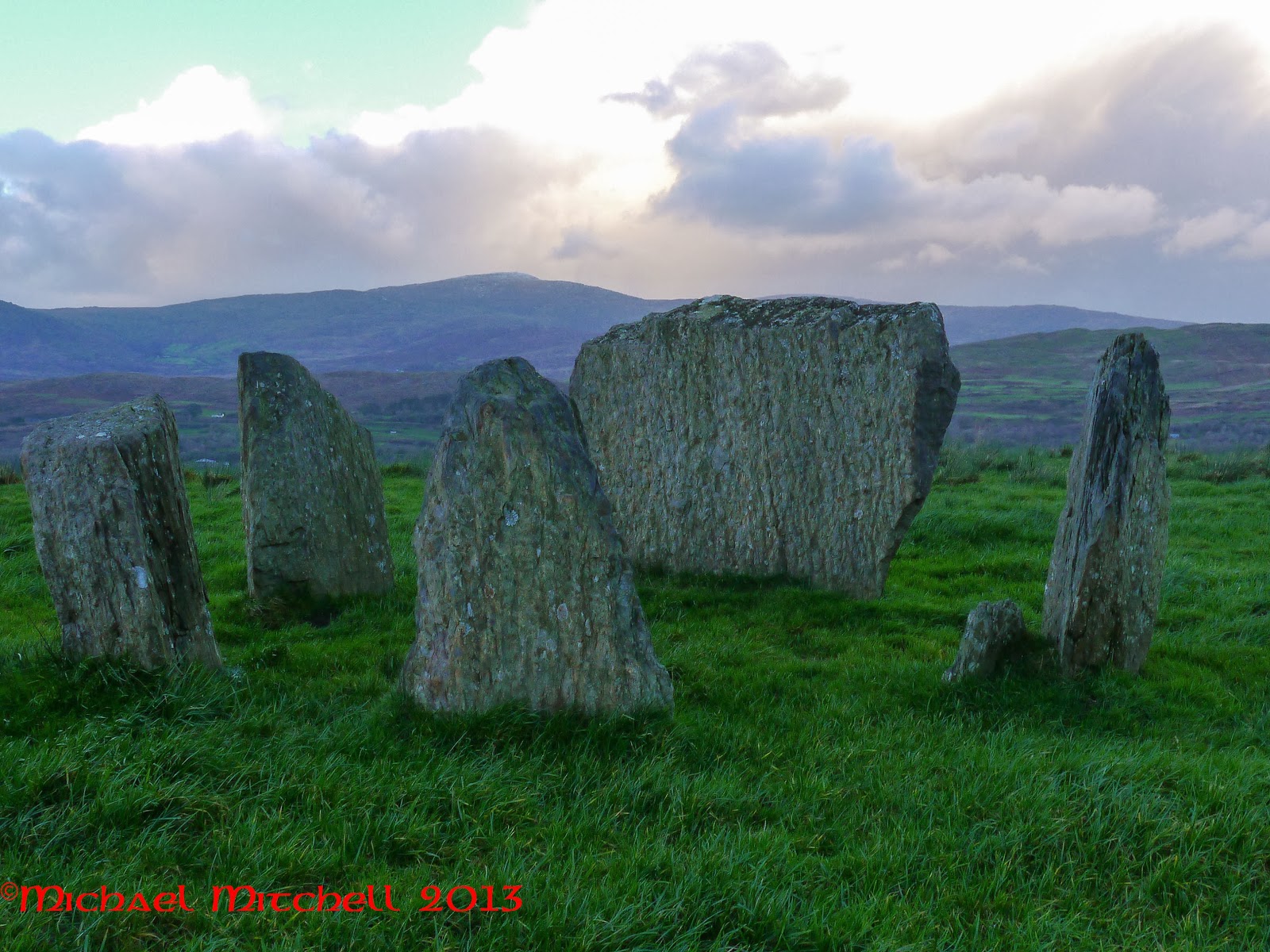 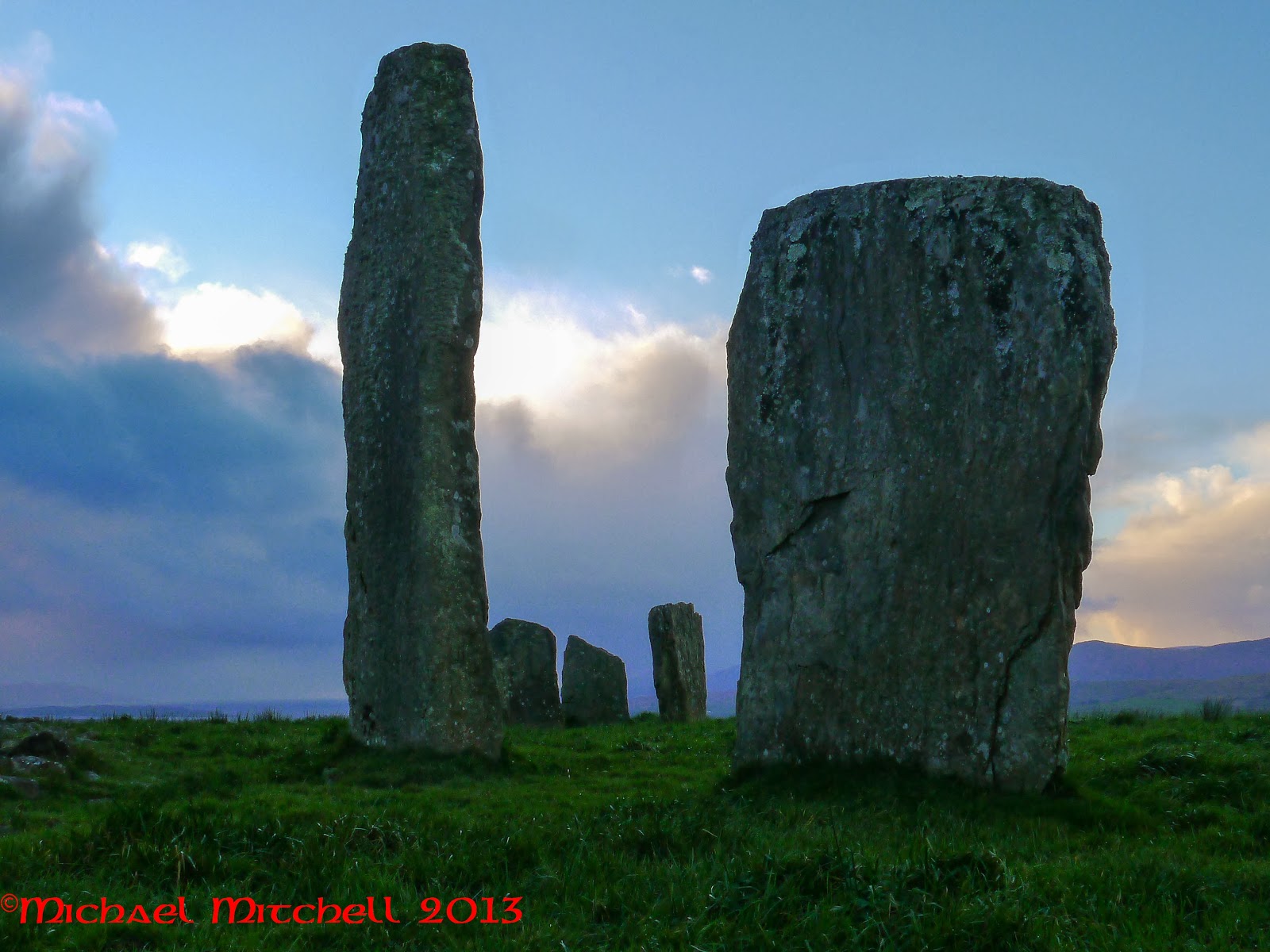 The small 5 stone circle is aligned NE-SW and has a diameter of 2.8m. Jack Roberts equates this with the Winter Solstice sun setting in line with the distant Carn Úi Neid (Mizen Peak). Today was the day after the Winter Solstice, but the sun appeared all too briefly to see it's setting point.
The impressive stone pair are also in a NE-SW alignment. When excavated in 1938, the SW stone was broken at ground level. The fallen part was re-erected in the original socket. In it's original state this stone would have stood some 5.3m - a massive 18 feet ! The NE stone stands at 2.65m.
The radial cairn sits beside the stone pair and even though fairly overgrown, it is still in good condition
The sun has now long since been shrouded by clouds, and in the fading light, the sky is turning a threatening shade of black. Time to head back to the car methinks ! and just in time too, as the heavens open up with a torrential downpour of hailstones. 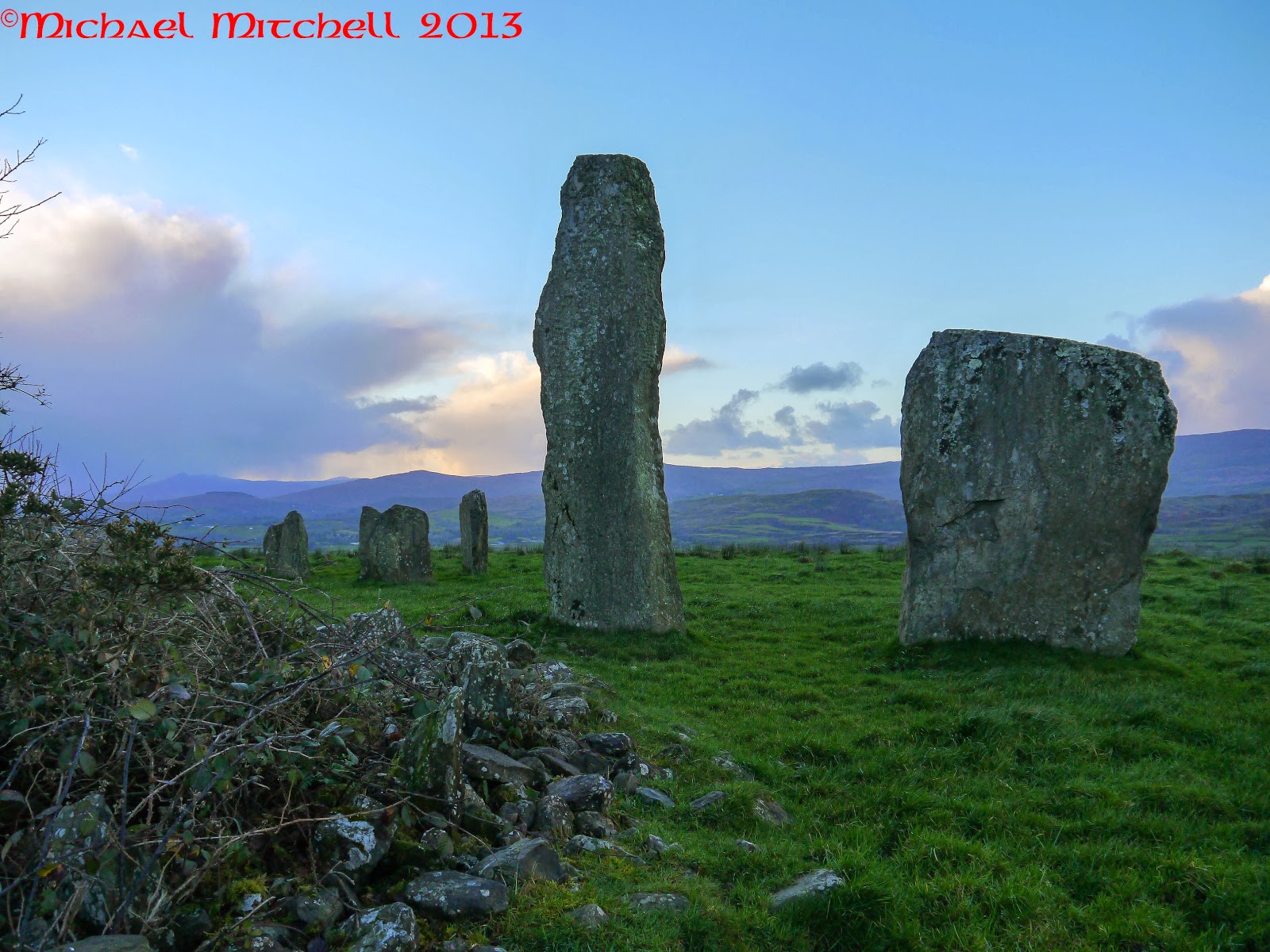 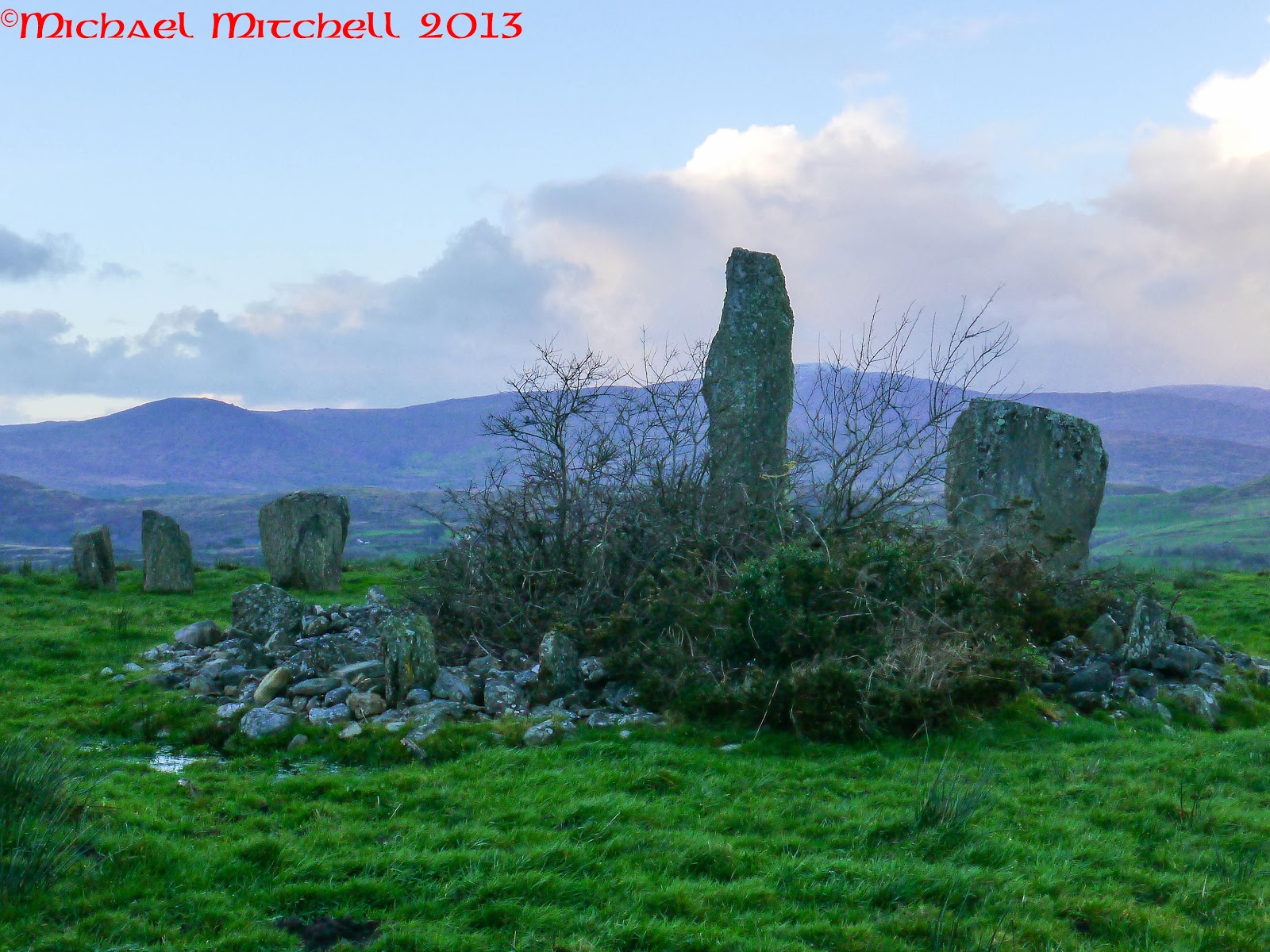 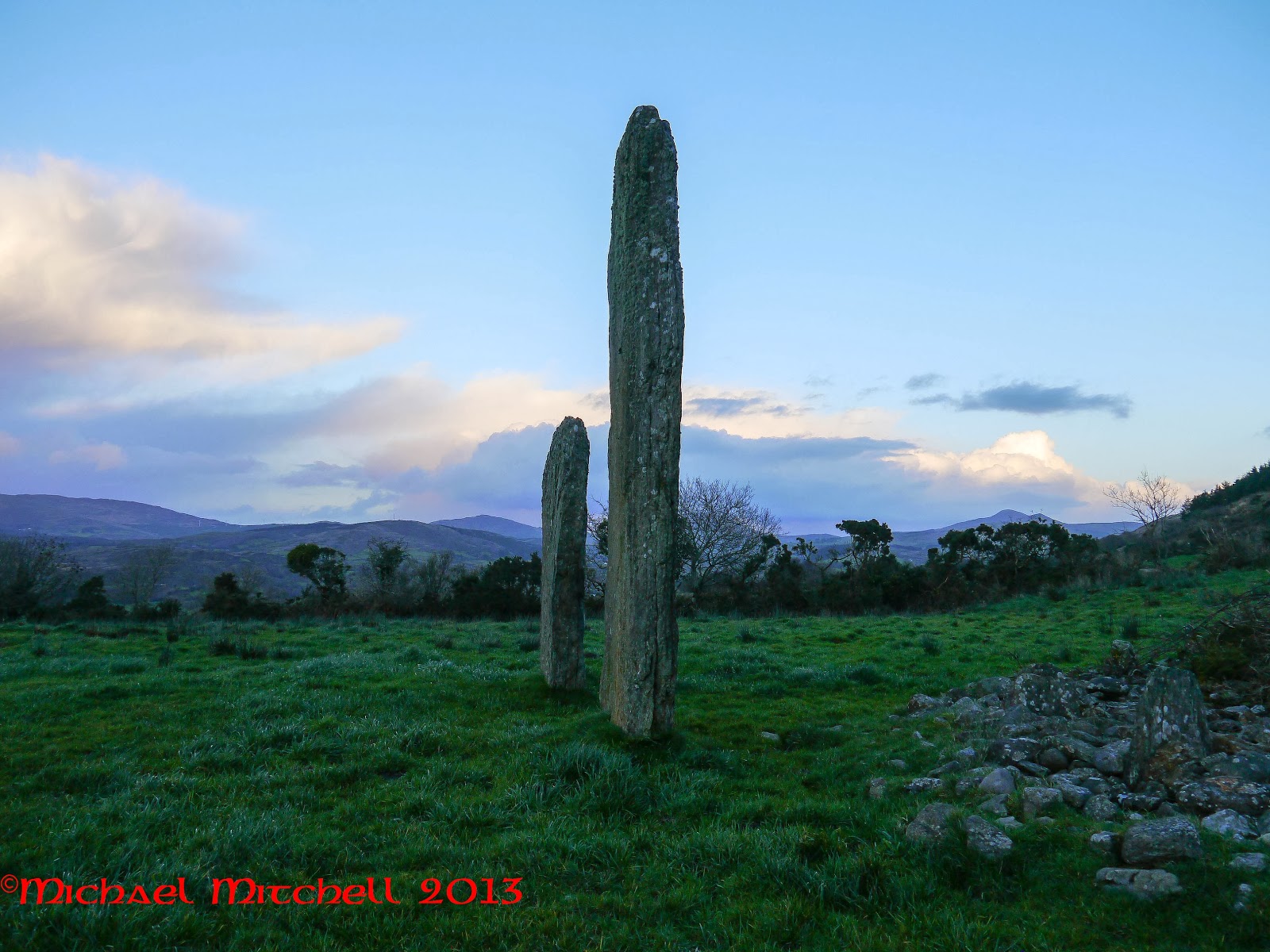 Refs and further reading -
Jack Roberts - The Sun Circles of Ireland 2013
Sean O'Nualain - A survey of stone circles in Cork and Kerry 1984
William O'Brien - Ivernia. A Prehistory of Cork 2012 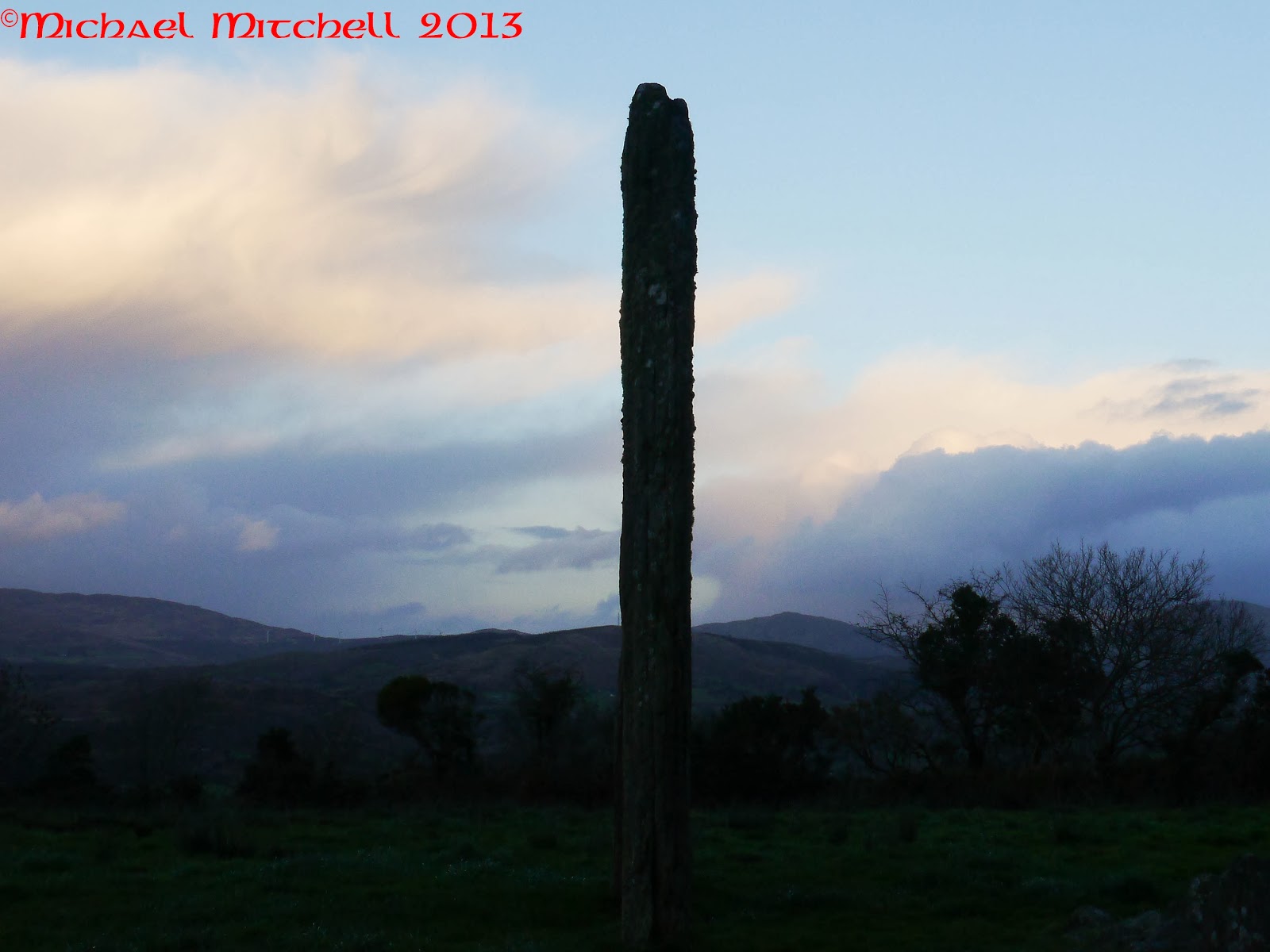 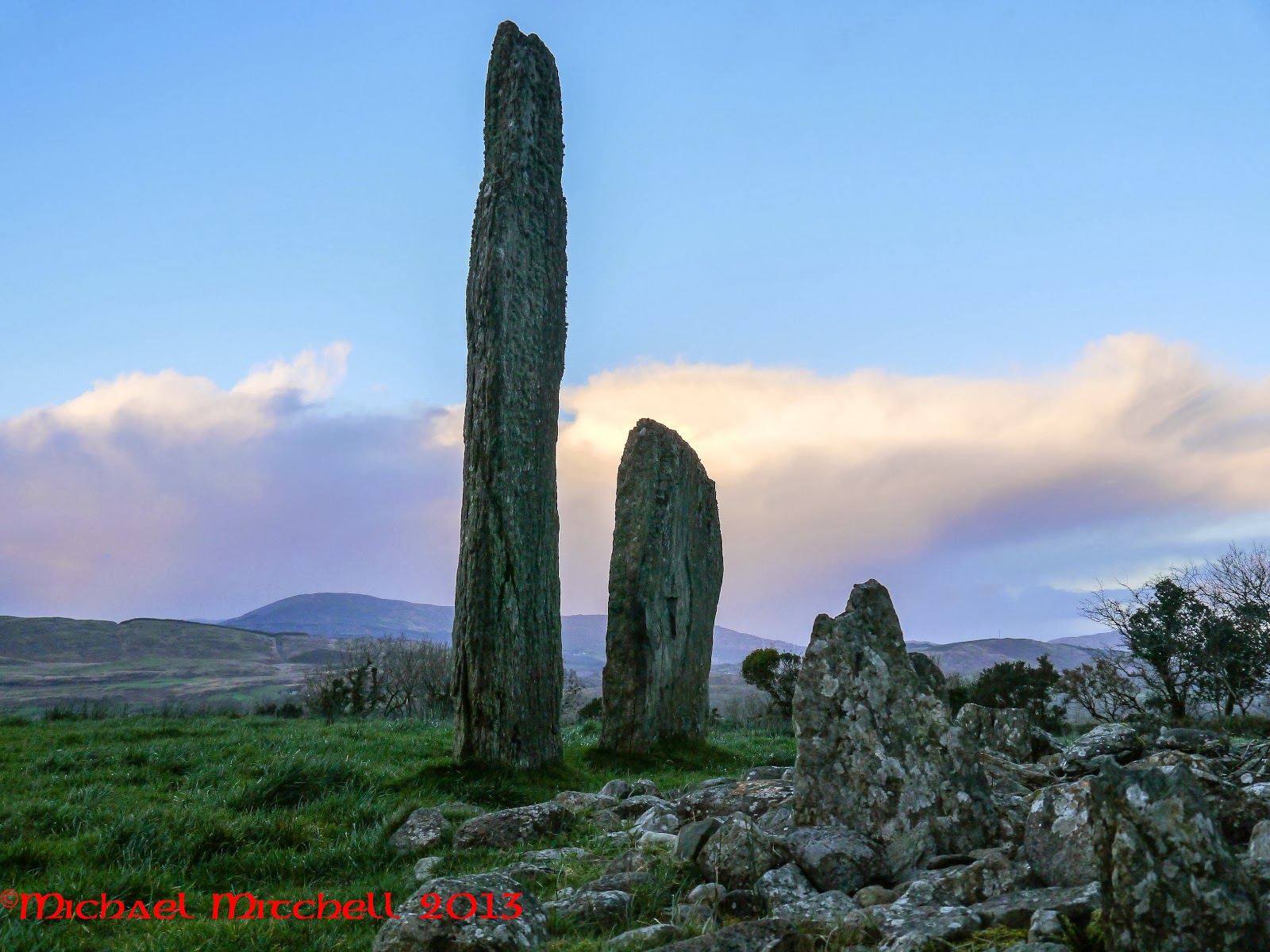 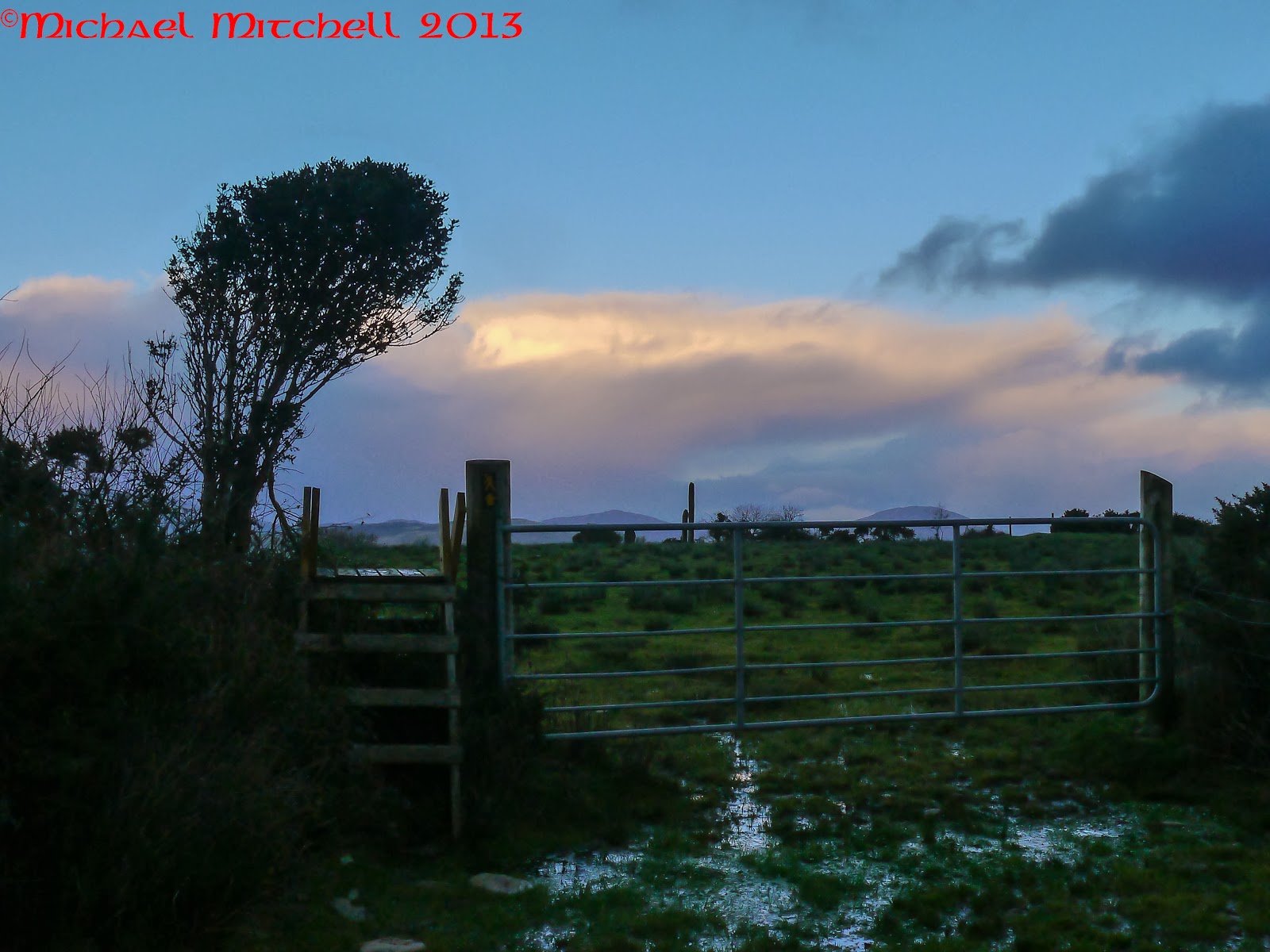 Posted by Michael Mitchell at 21:25