Return to The Beara Peninsula

13th January 2014
Today we are off on another trip to the Beara Peninsula.
First stop of course though is Hudsons Wholefoods in Ballydehob for our Pasty and chocolate brownie fix for later in the day.
We follow the usual route - Bantry-Glengarriff then a quick look in at Adrigole for some Seals. They like to lay out on the rocks in the harbour and sure enough - there are 4 of them out there.
Another quick stop at Castletownbere for any interesting Gulls, is unproductive so it's on to the first stones of the day.
Yes..... you guessed it. Dereenataggart West Circle. We are greeted by a rainbow over the circle, followed by a quick shower. But it doesn't deter us, J has her Dowsing rods and I just take in the atmosphere of one of my favourite circles. 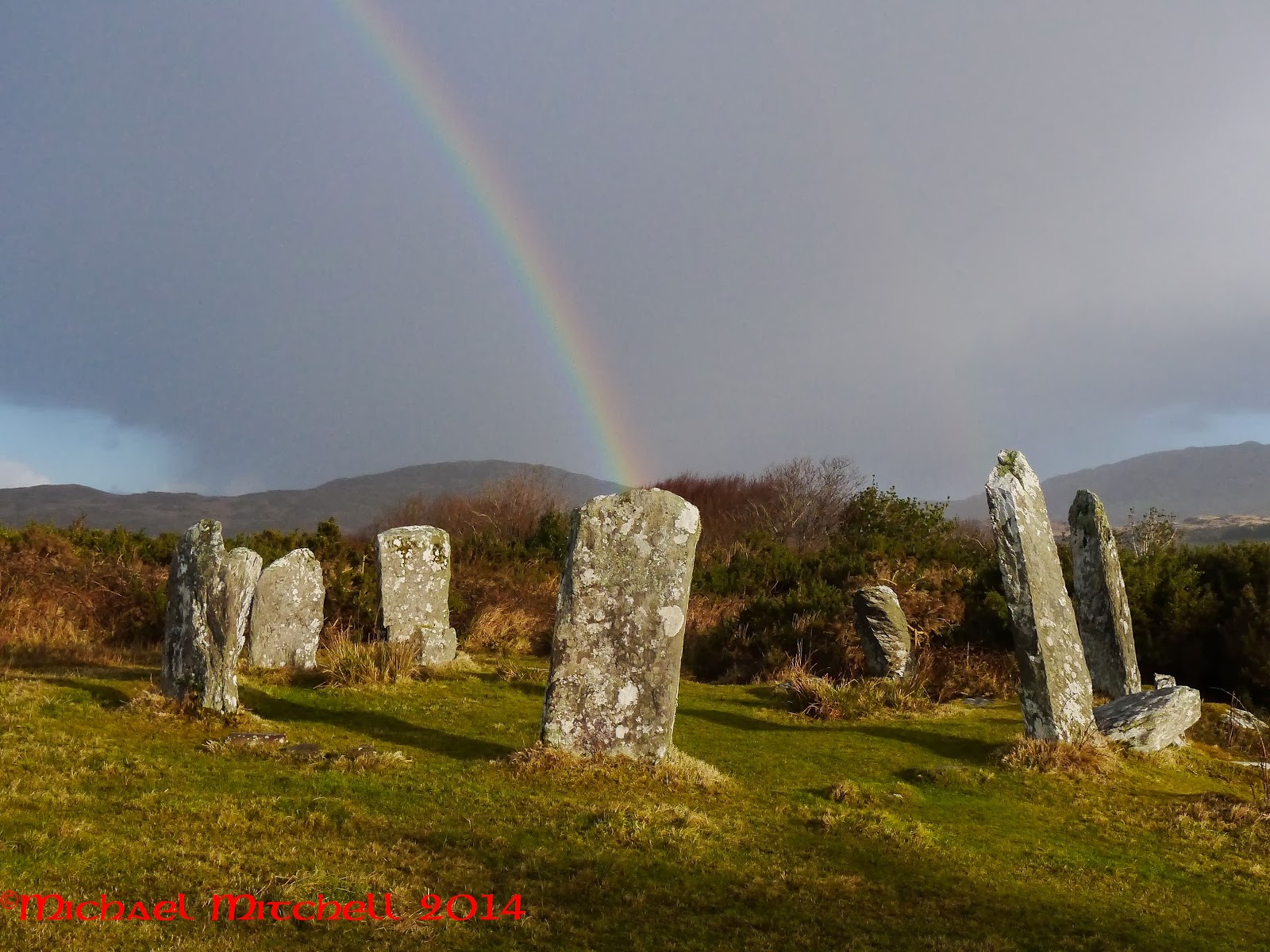 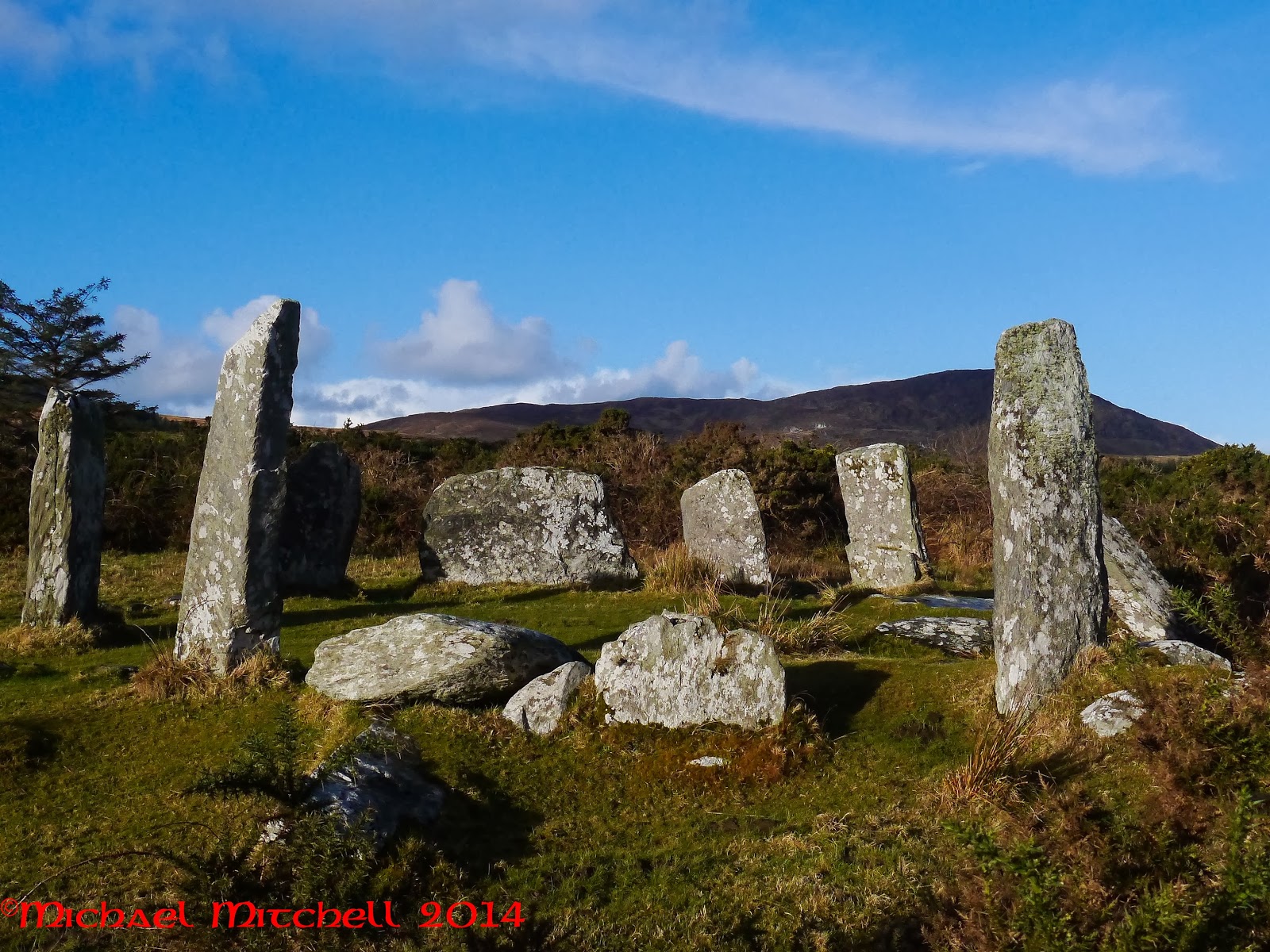 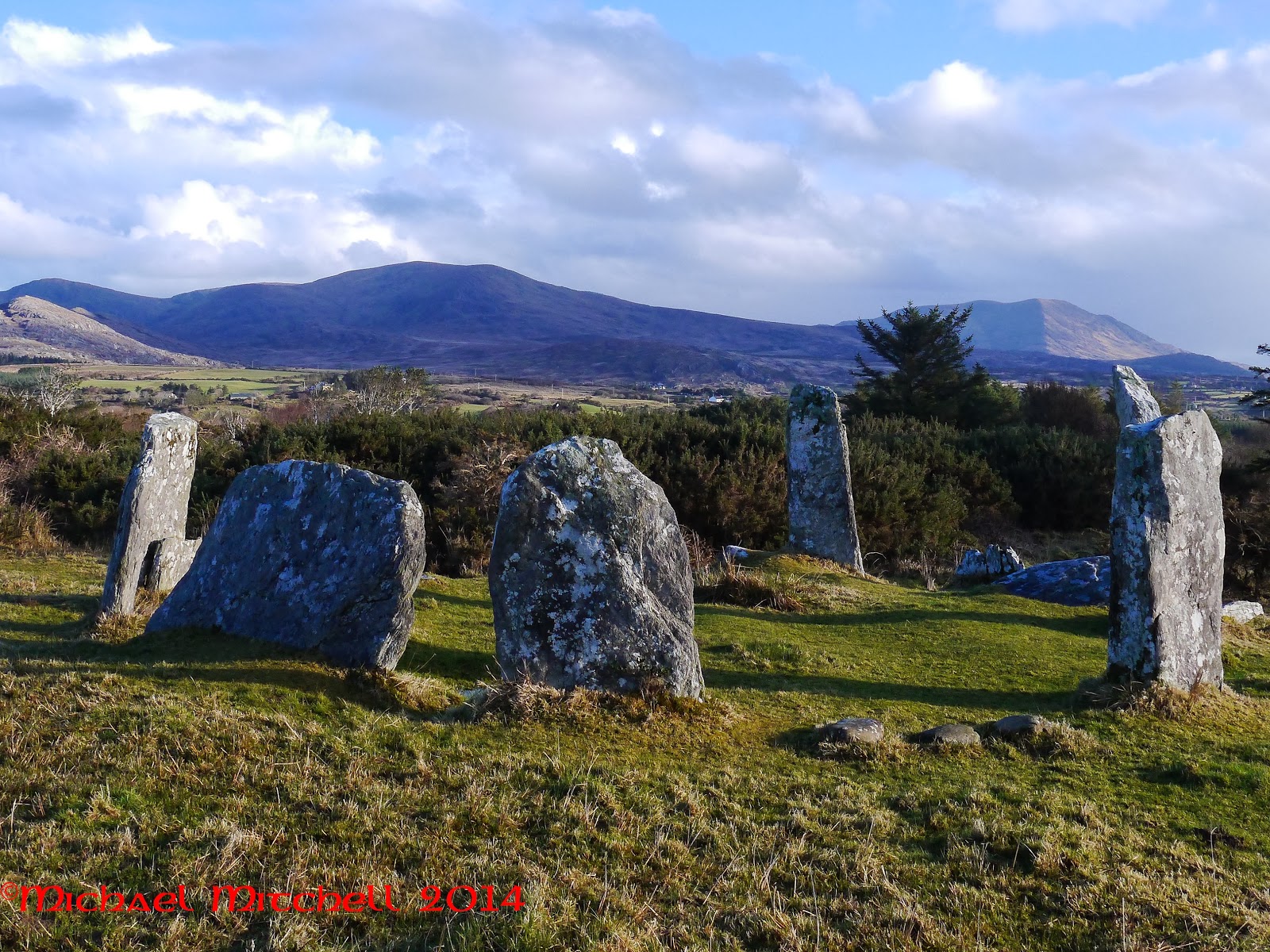 Further along the road we park up by Teernahillane Ring Fort. I am determined to find the Teernahillane stone pair and boulder burial once and for all. I have checked the NMS map and have it pinpointed down the road before the two houses ! If you have read the previous blogs about the Beara, then you will know that this particular stone pair and boulder burial, have become a thorn in my side having eluded me every trip down here ! Today I am determined. I walk all the way down until I reach the first house.... no sign ! I walk back up..... still no sign ! Surely they haven't been swallowed up in the mass of undergrowth and bogland. A pair of Jays scream out as they fly across the road. Dejected, I walk back to the car. The stones have beaten me again......
We drive slowly along just in case.Then, as we pass the two houses - my chief stone spotter - J shouts.... "There they are". and there they were..... in the garden of the second cottage. Now, perhaps the name of the cottage "Stone Cottage" should have been a giveaway, but the NMS map has them some 50-100 yards away in "rough pasture"
A quick knock on the door of the cottage... no answer. In fact, the house is empty, so I quickly have a look at the stones. They look so out of place here amongst the flower beds.
The stones are aligned NNE-SSW and are quite small at 1.3m and 0.95m in height respectively.
The boulder burial is situated just 3m NW of the pair. Again - not too spectacular. The large slab rests on at least 2 supports. A broken slab leans against one end.
Back to the car with a smile on my face :) 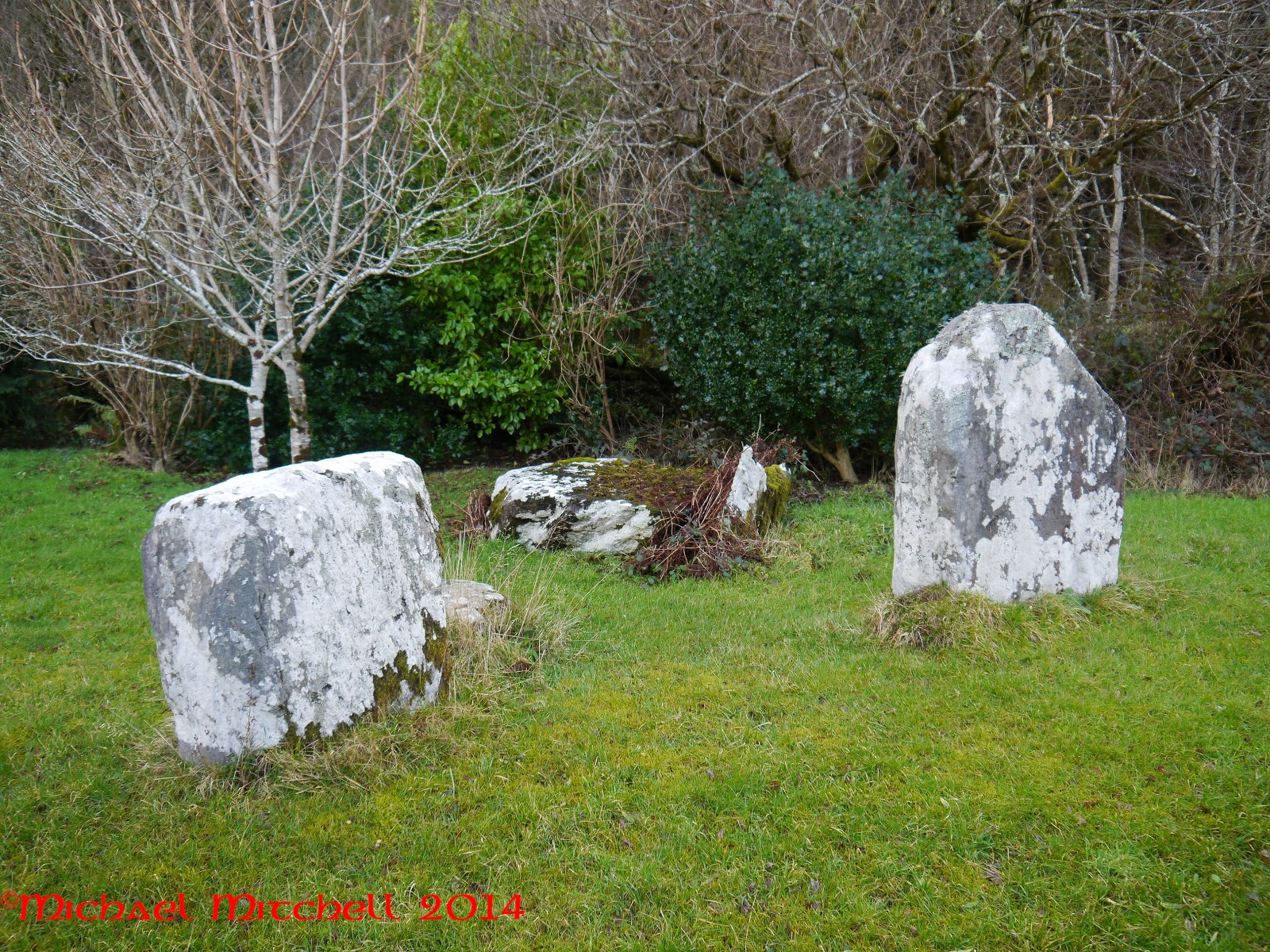 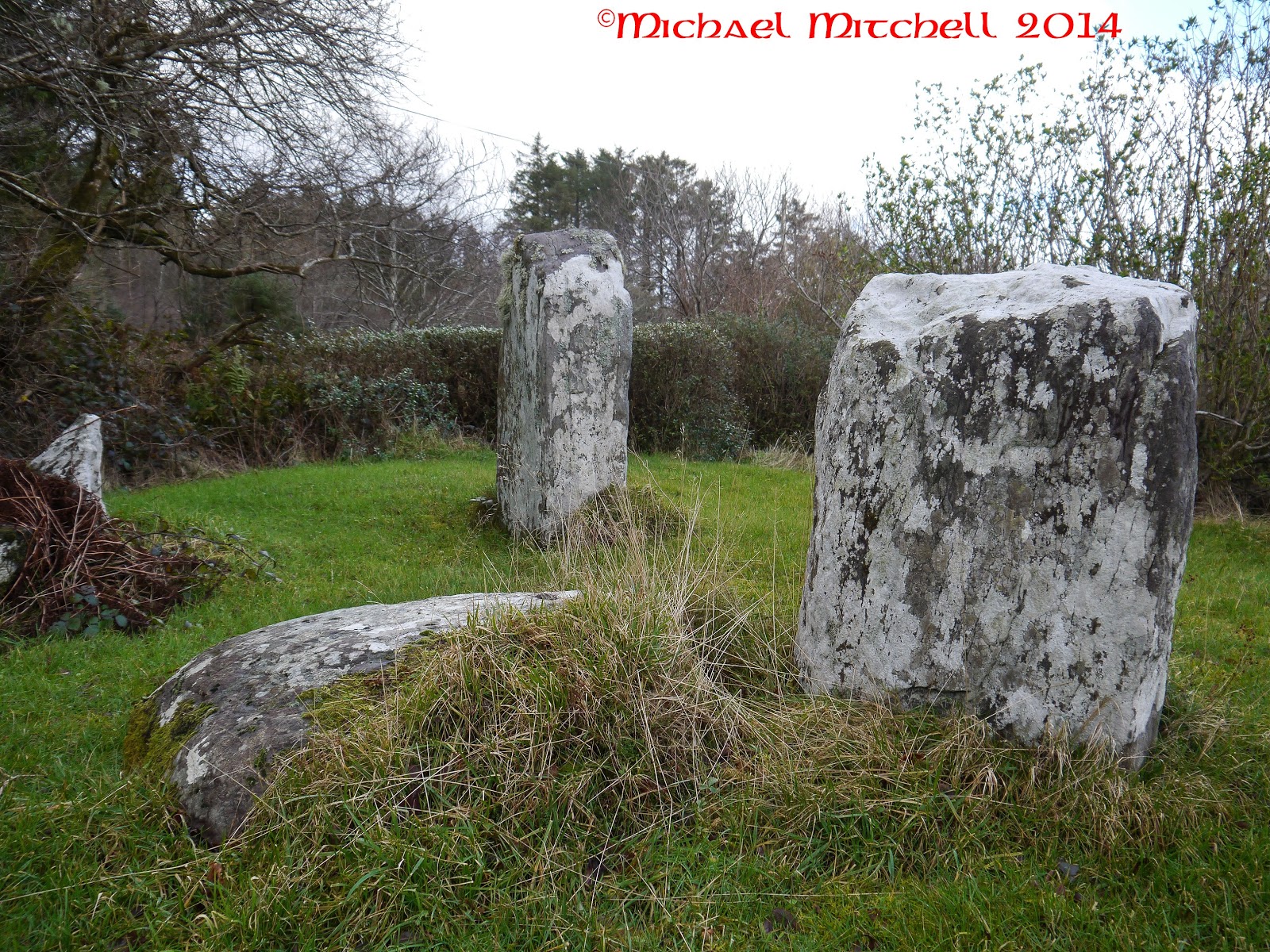 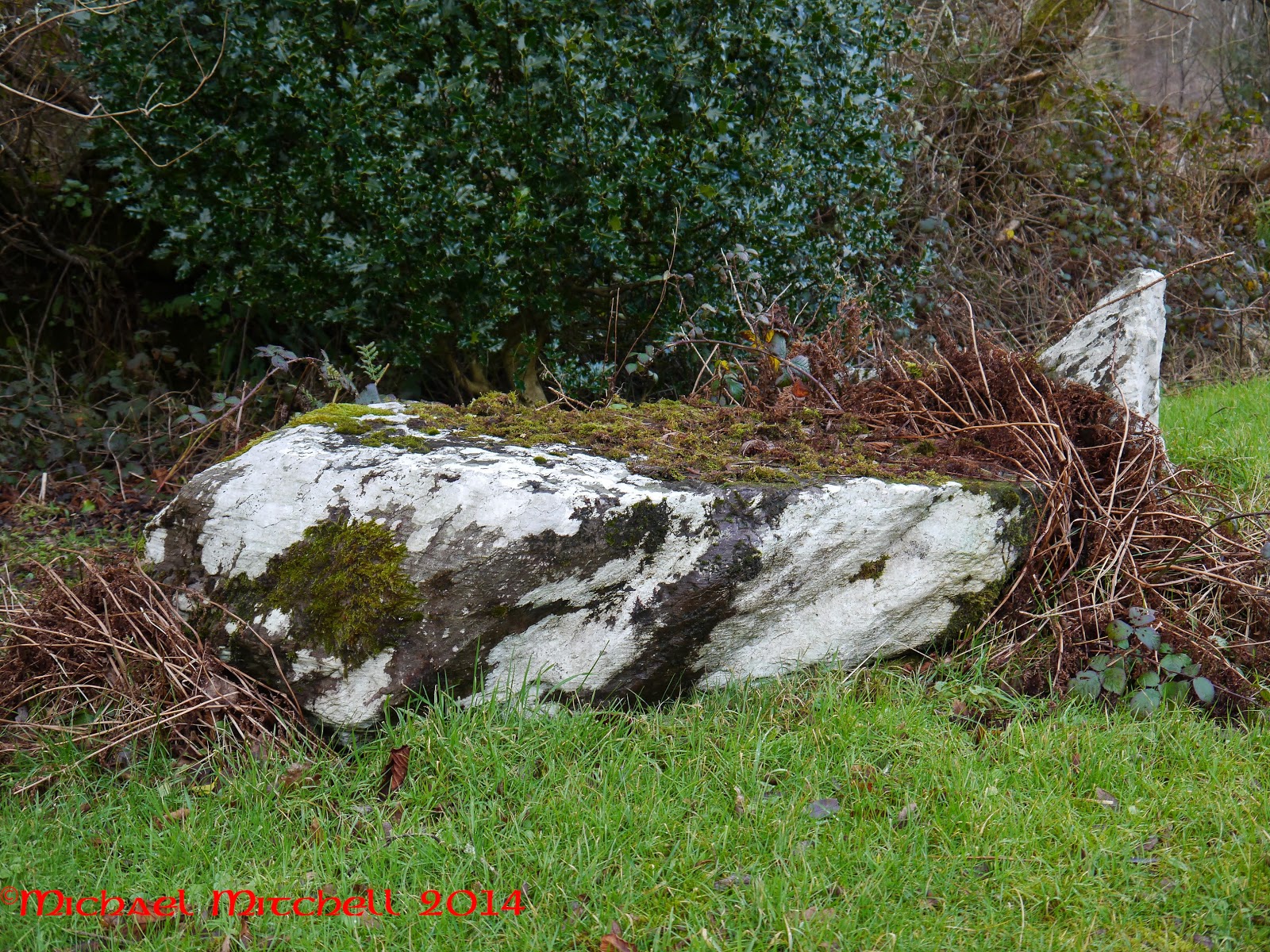 Next it's round to Kealoge, to pick up another stone that was missed last time round. Though it was time that was a factor that day. We turn up the Kealoge turning and past the farmhouse. A mad Collie lunges manically at the car tyres.... 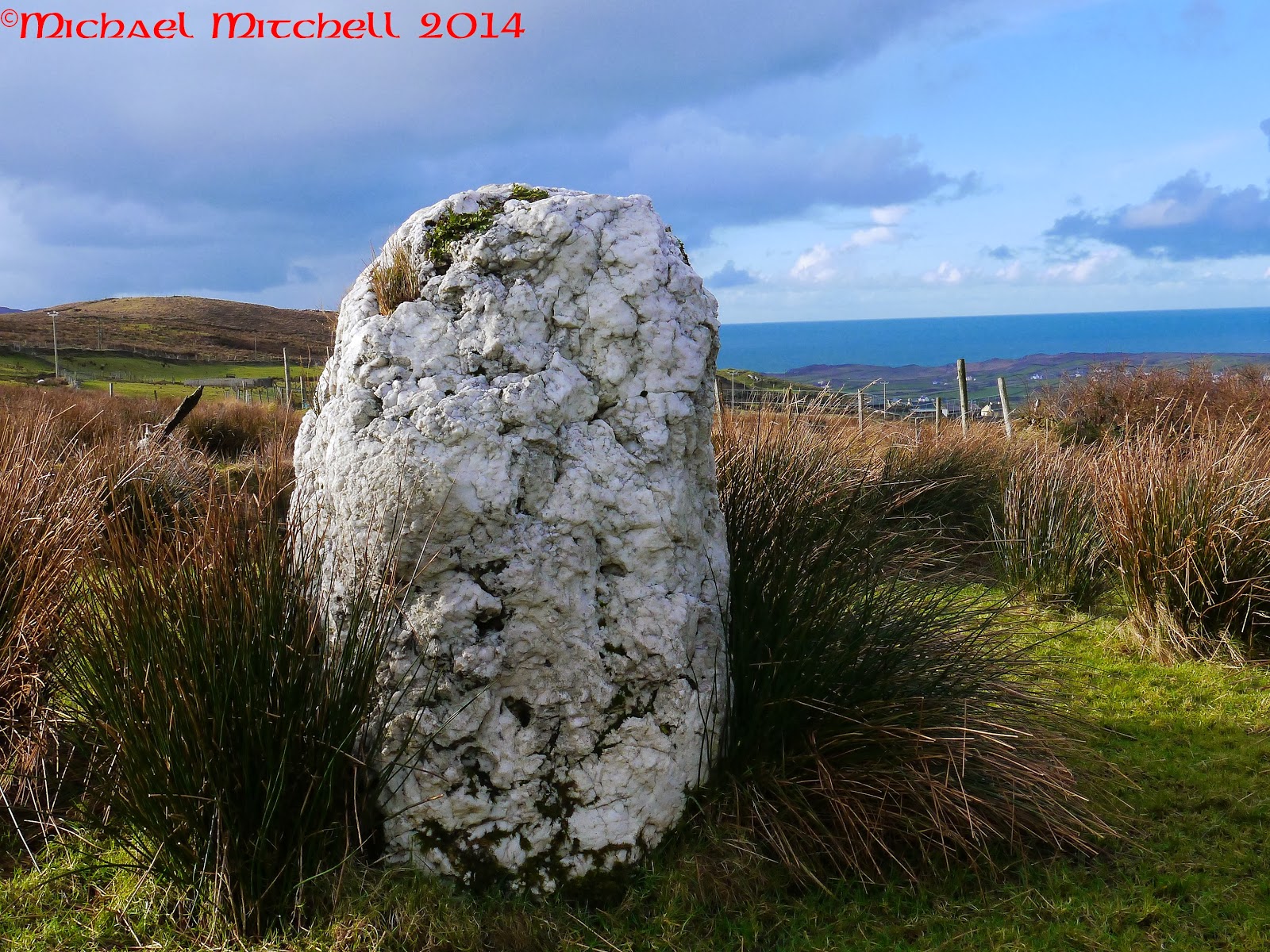 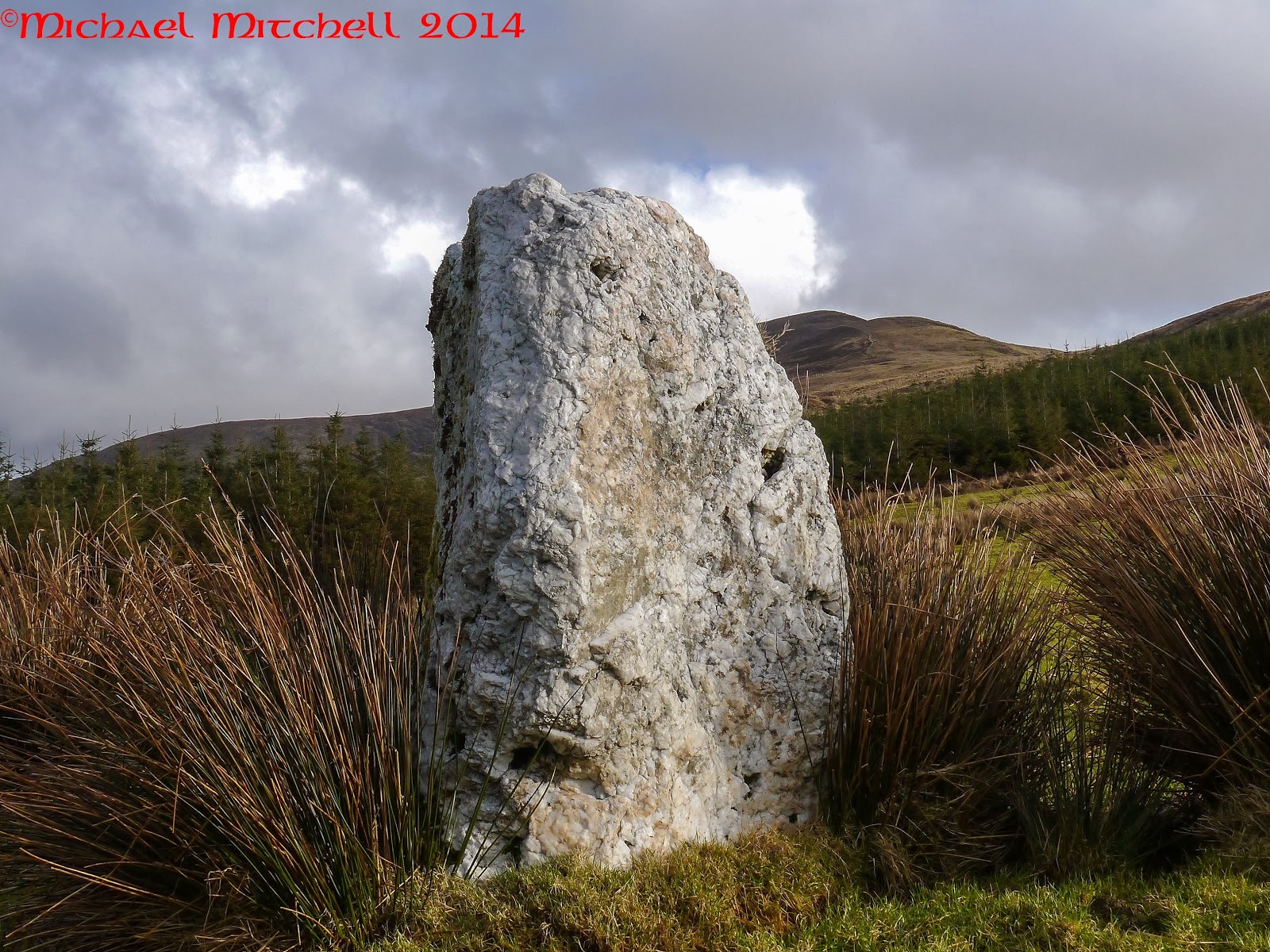 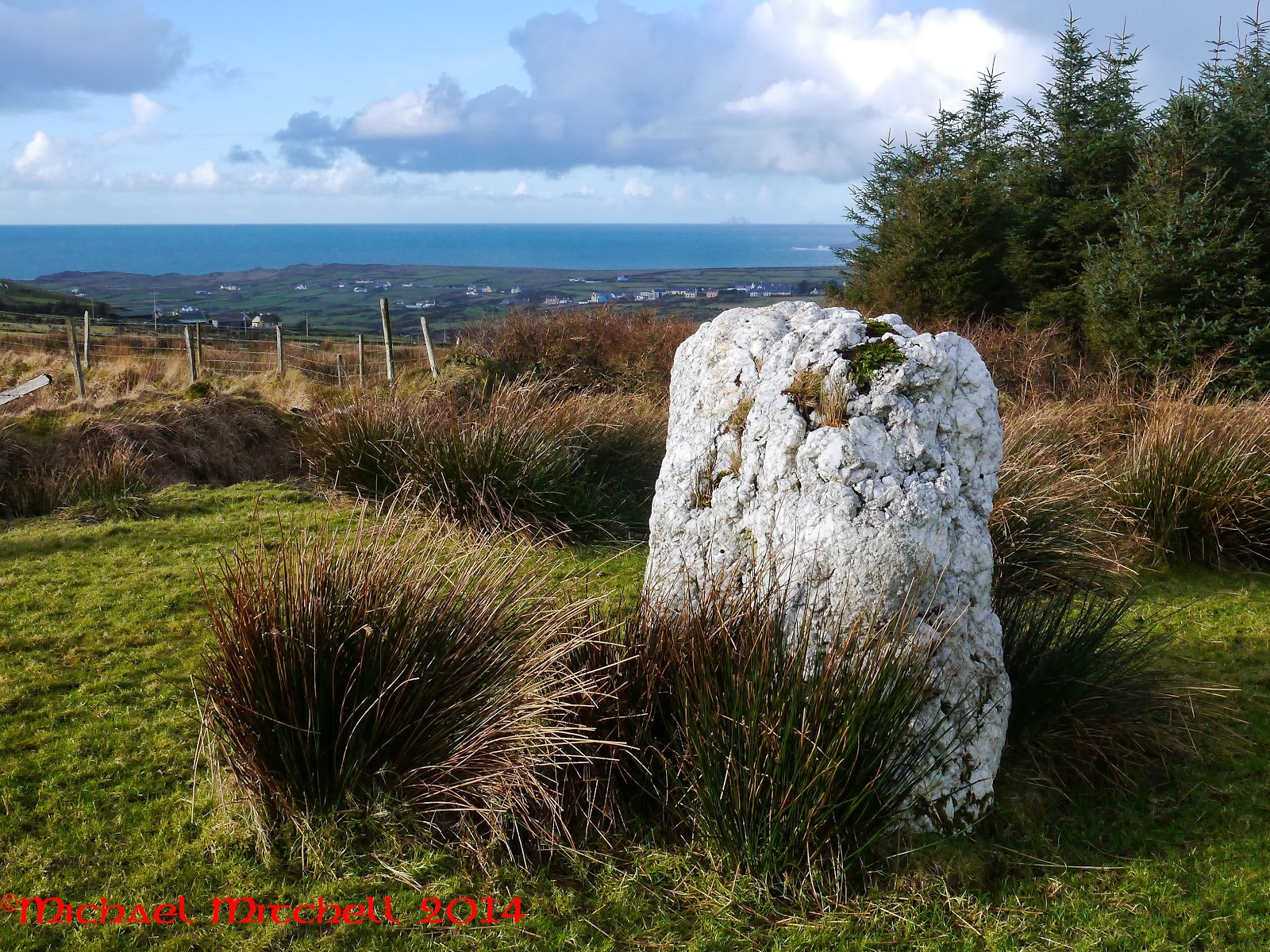 Further up the lane there is room to park at a gateway. The stone itself sits a few fields below at the bottom of the hill.
It's further down than it looks, but soon enough it is before me in all of it's glory. 1.62m over 5ft tall block of pure white quartz. Aligned the usual NE-SW and looked over by the mountains of Knockgour and Knockoura with extensive views over Coulagh Bay.
The walk back up requires a little more effort than the walk down, with a few stops to take in the views (and breath ! ). 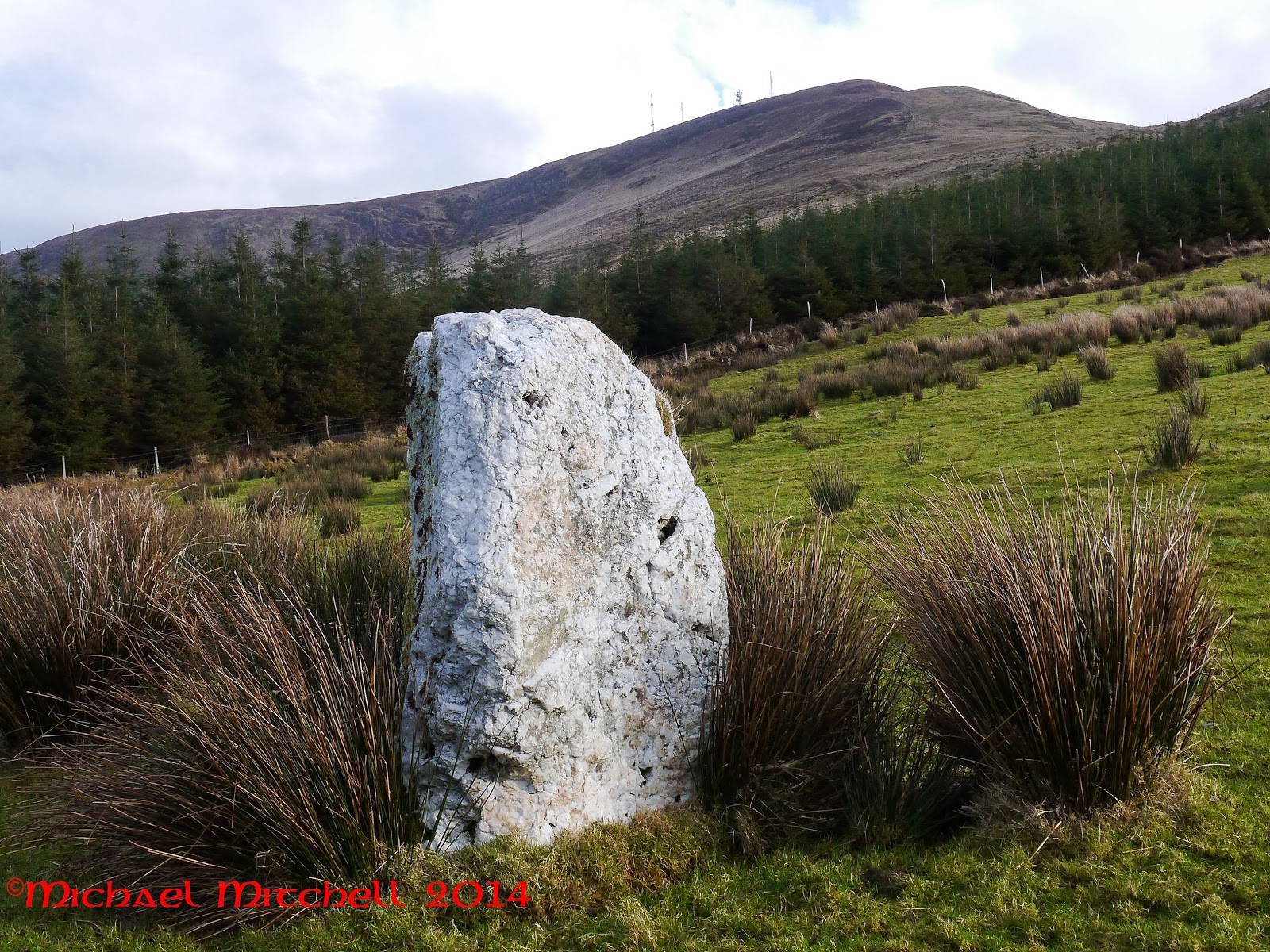 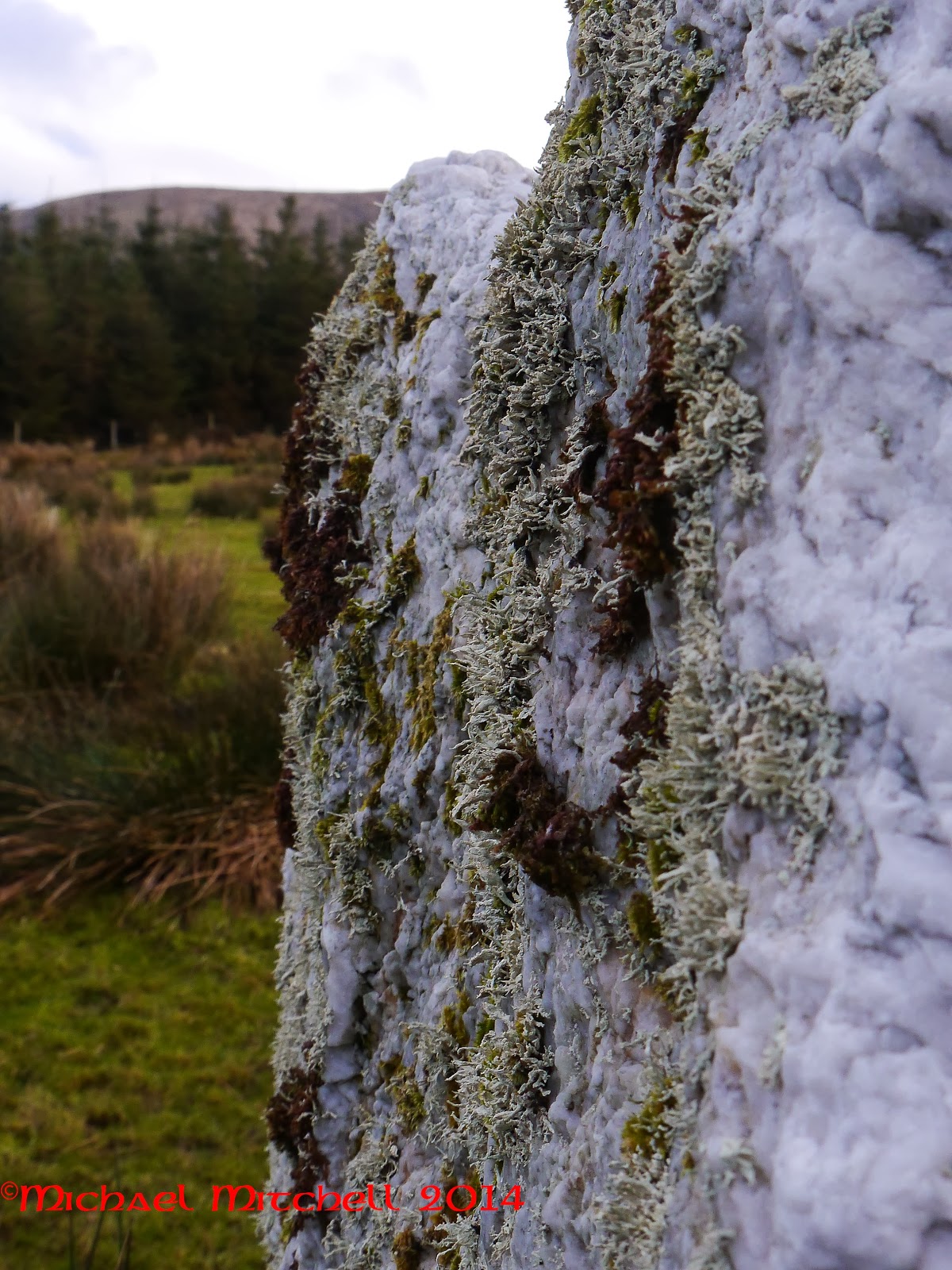 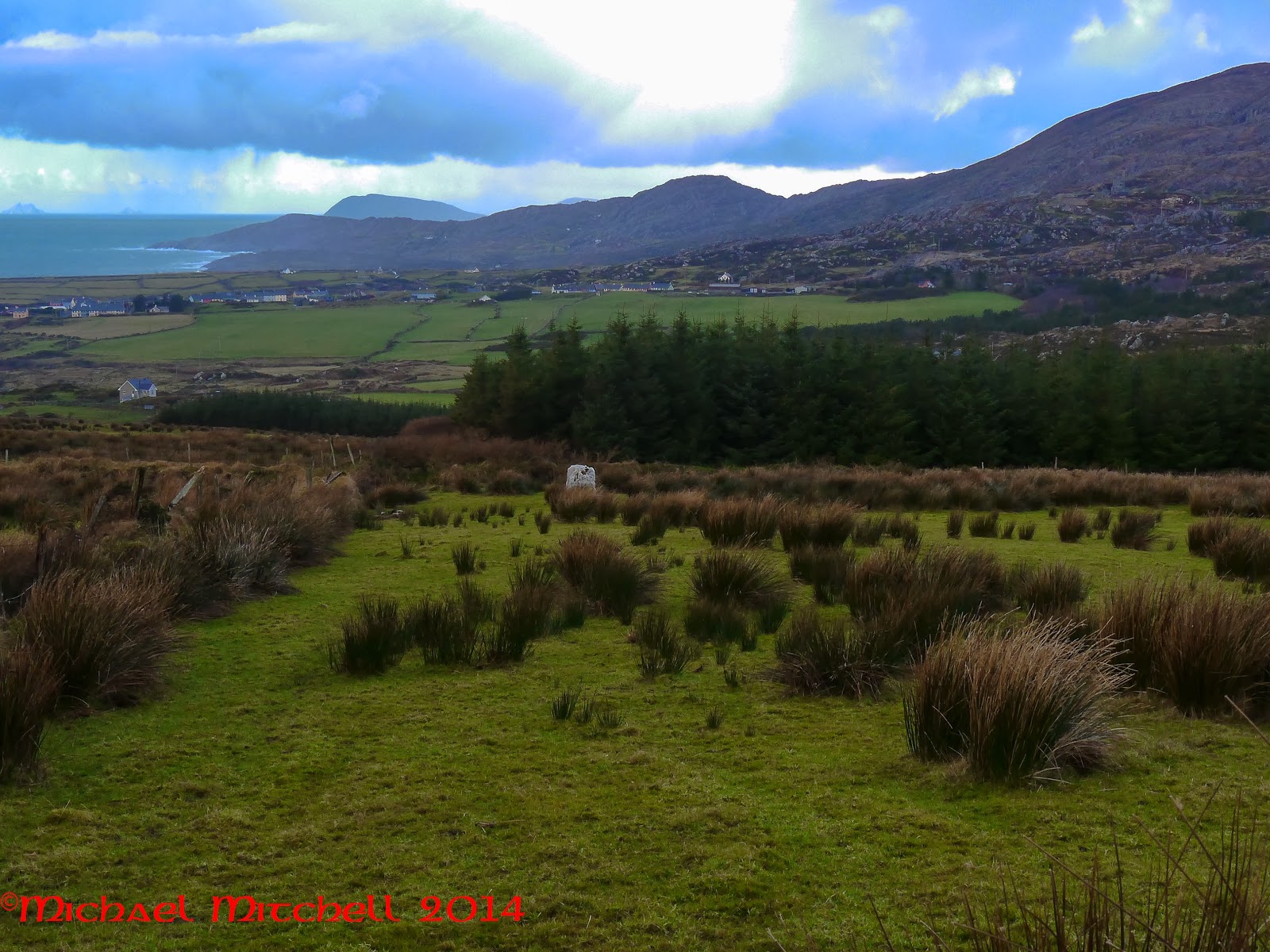 Back up at the car, we again run the gauntlet of the mad Collie, only this time the word must be out and it seems that every house in the area also has a car chasing mad Collie - one passing the duty on to the next and so on. With tyres still in tact, we continue through to Allihies intending to head for Eyeries but the road is shut due to damage from the recent storms. We are diverted back round to Castetownbere and head up to Eyeries from there then to Ardgroom for a revisit to Ardgroom Outward circle. 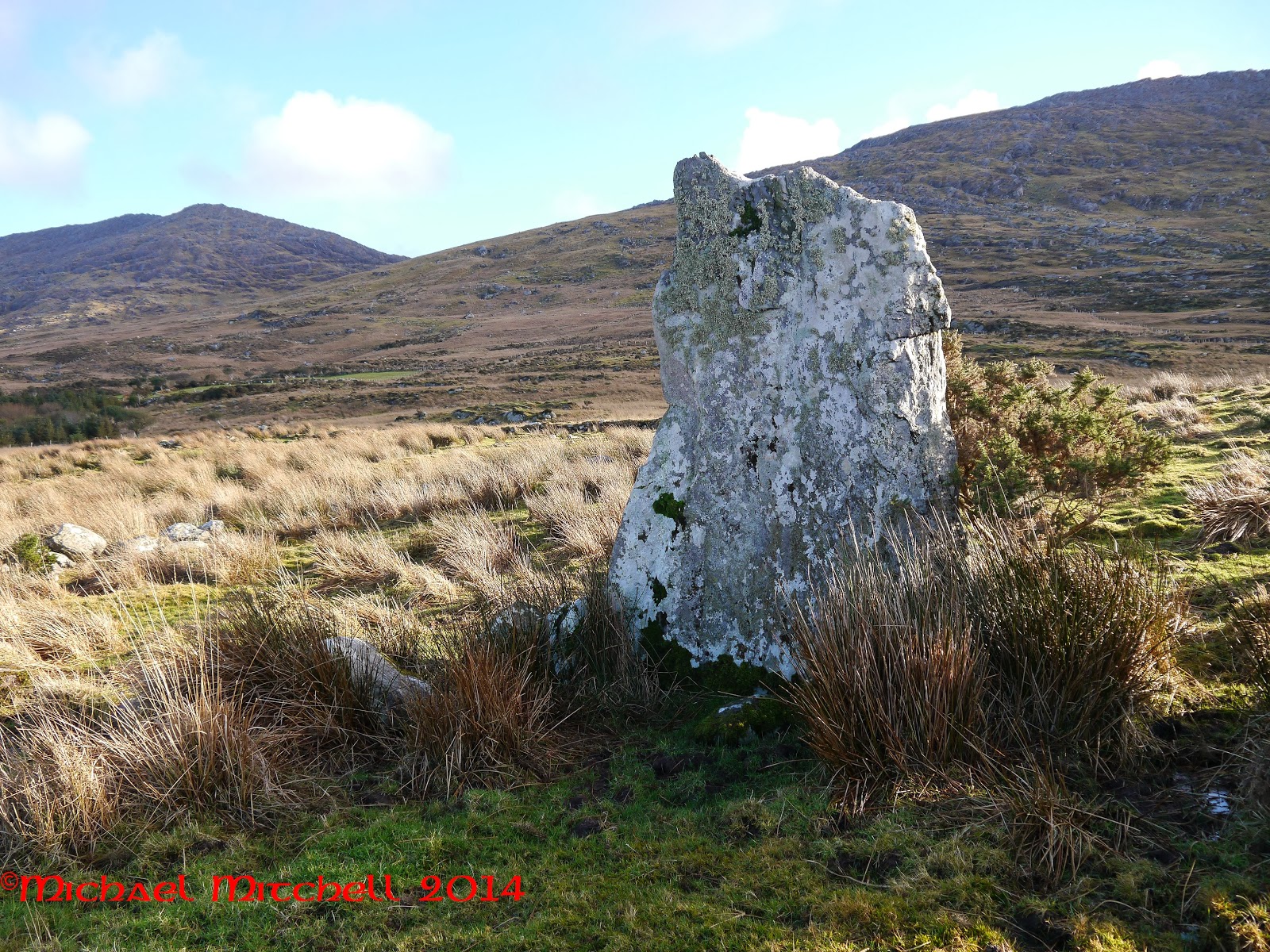 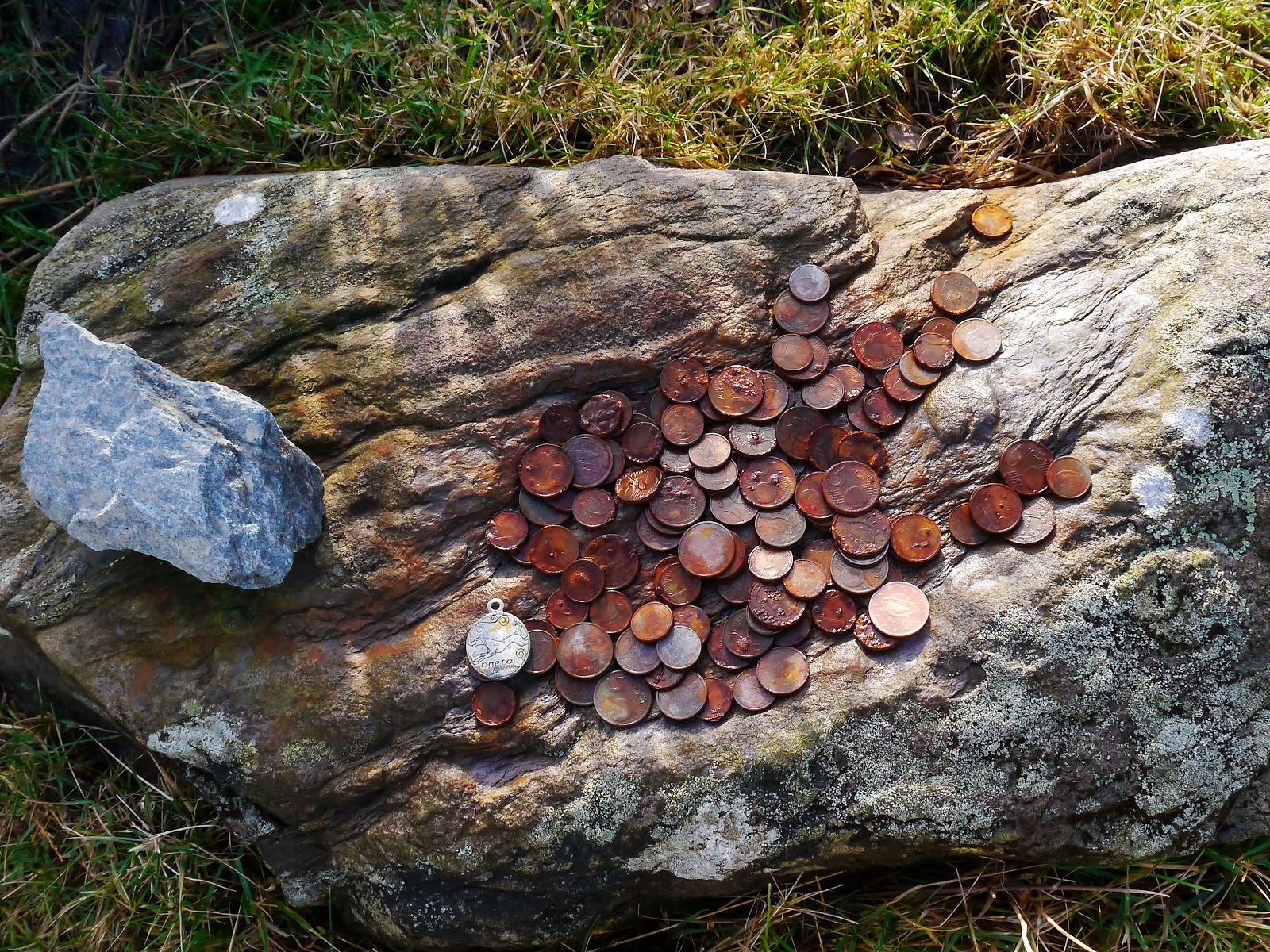 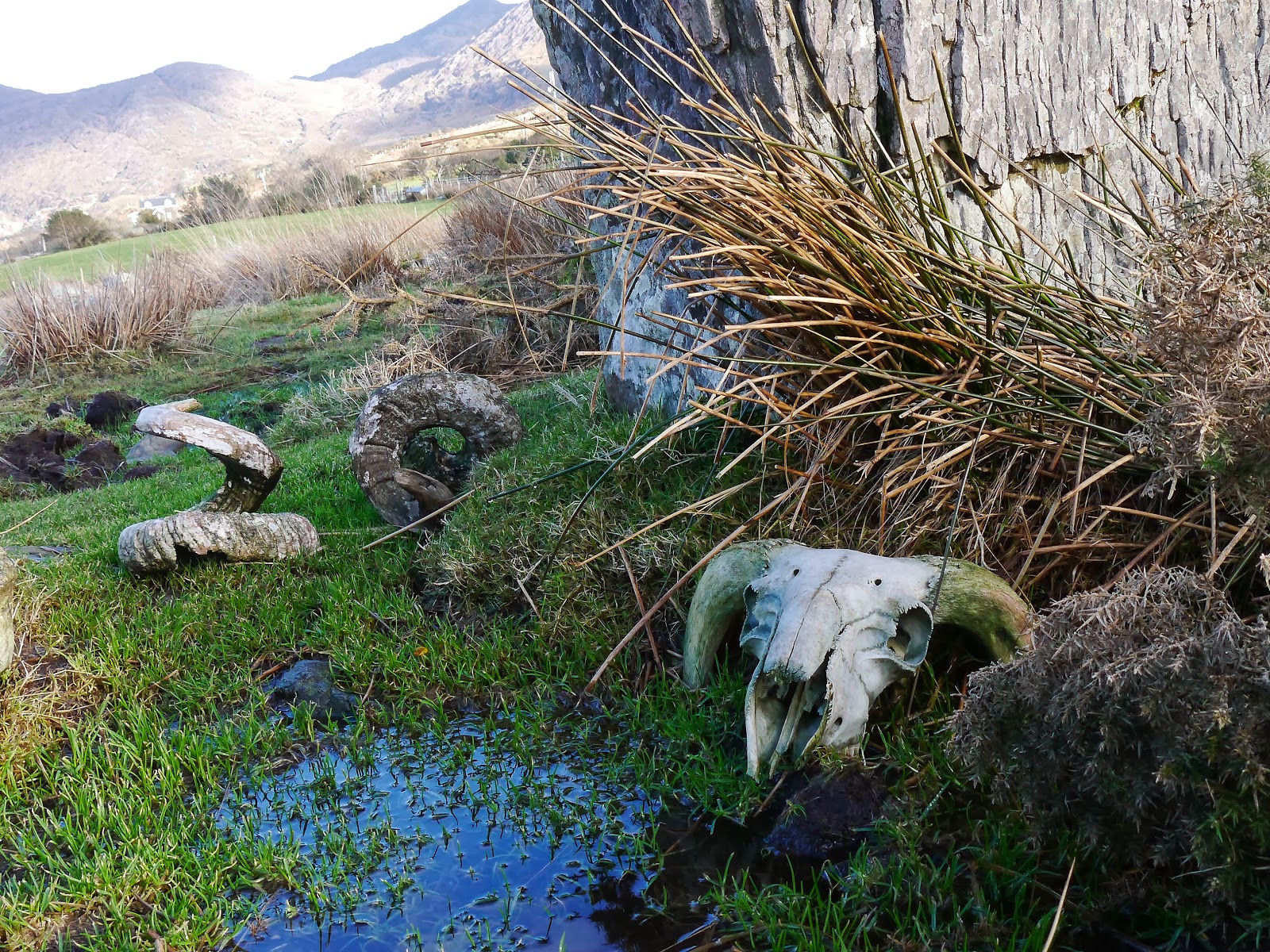 The track up to the small carpark is a bit rougher than I remember. The walk to the circle is definitely wetter than last time. The final stretch from the gate being the worst. But there is always a way across and luckily I find one that doesn't involve being knee deep in bog water.
The Standing Stone and accompanying Stone Circle look as magnificent as I remember and with the sun shining and the sky a radiant blue, you can really appreciate the surroundings. 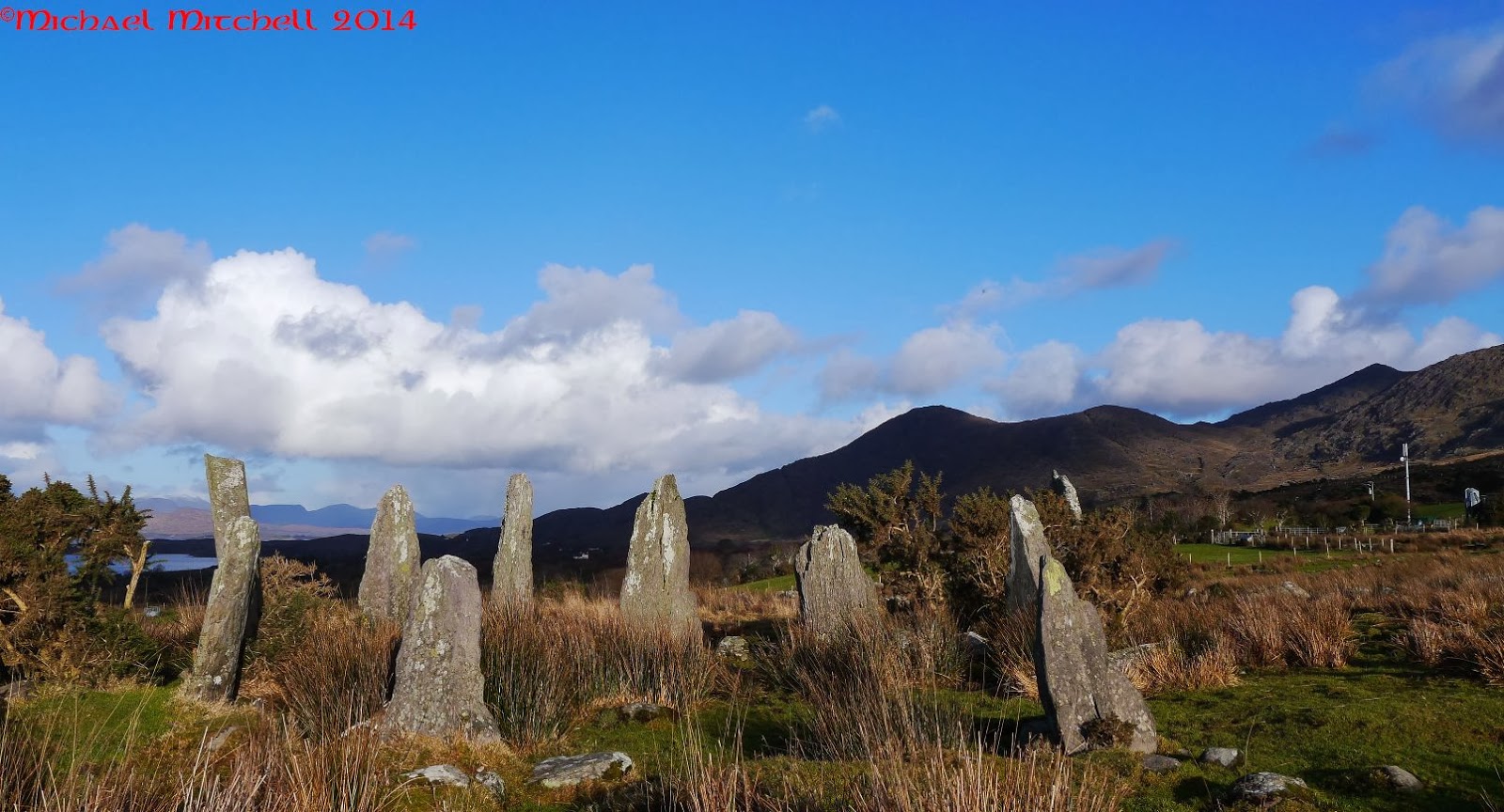 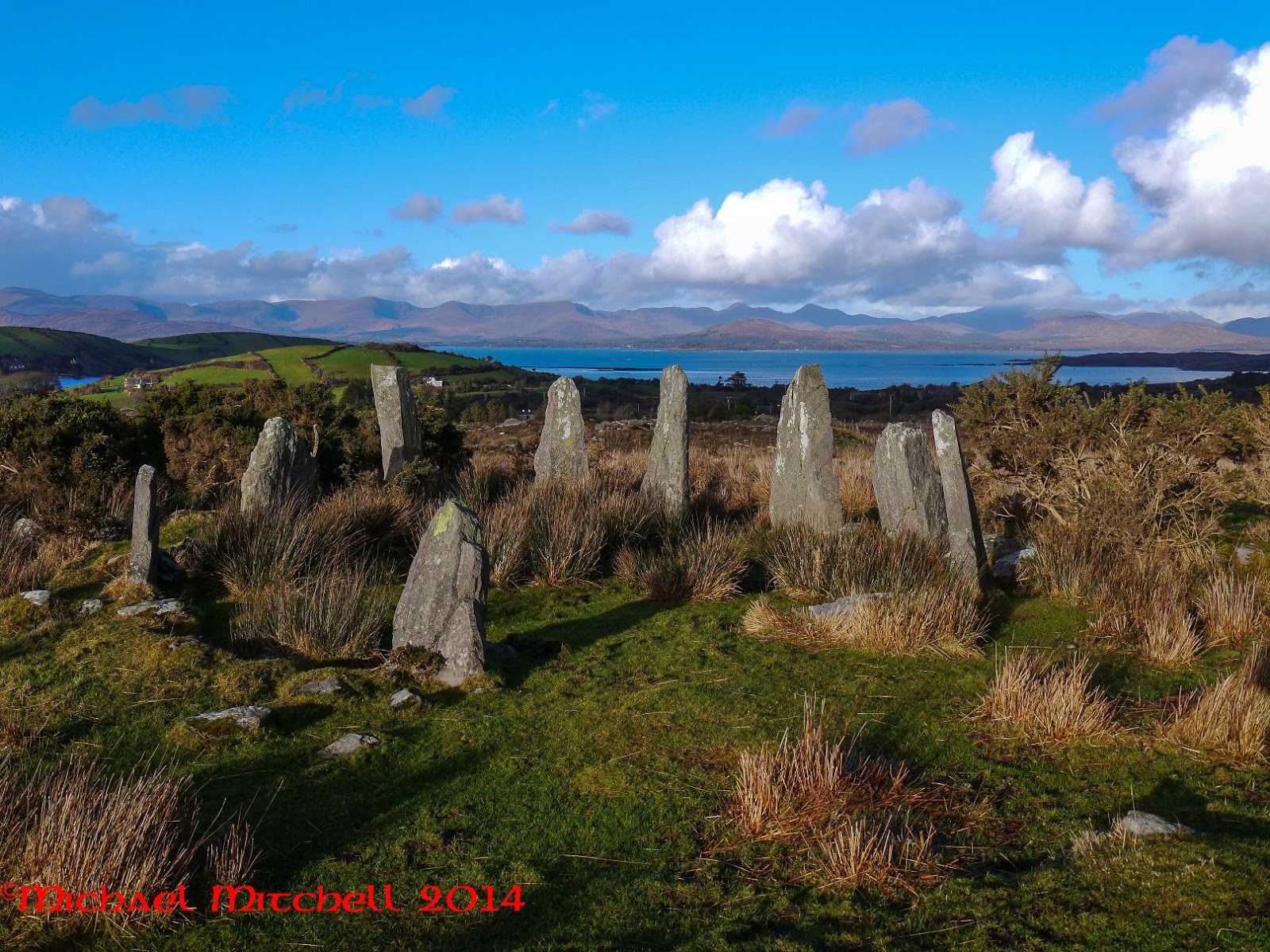 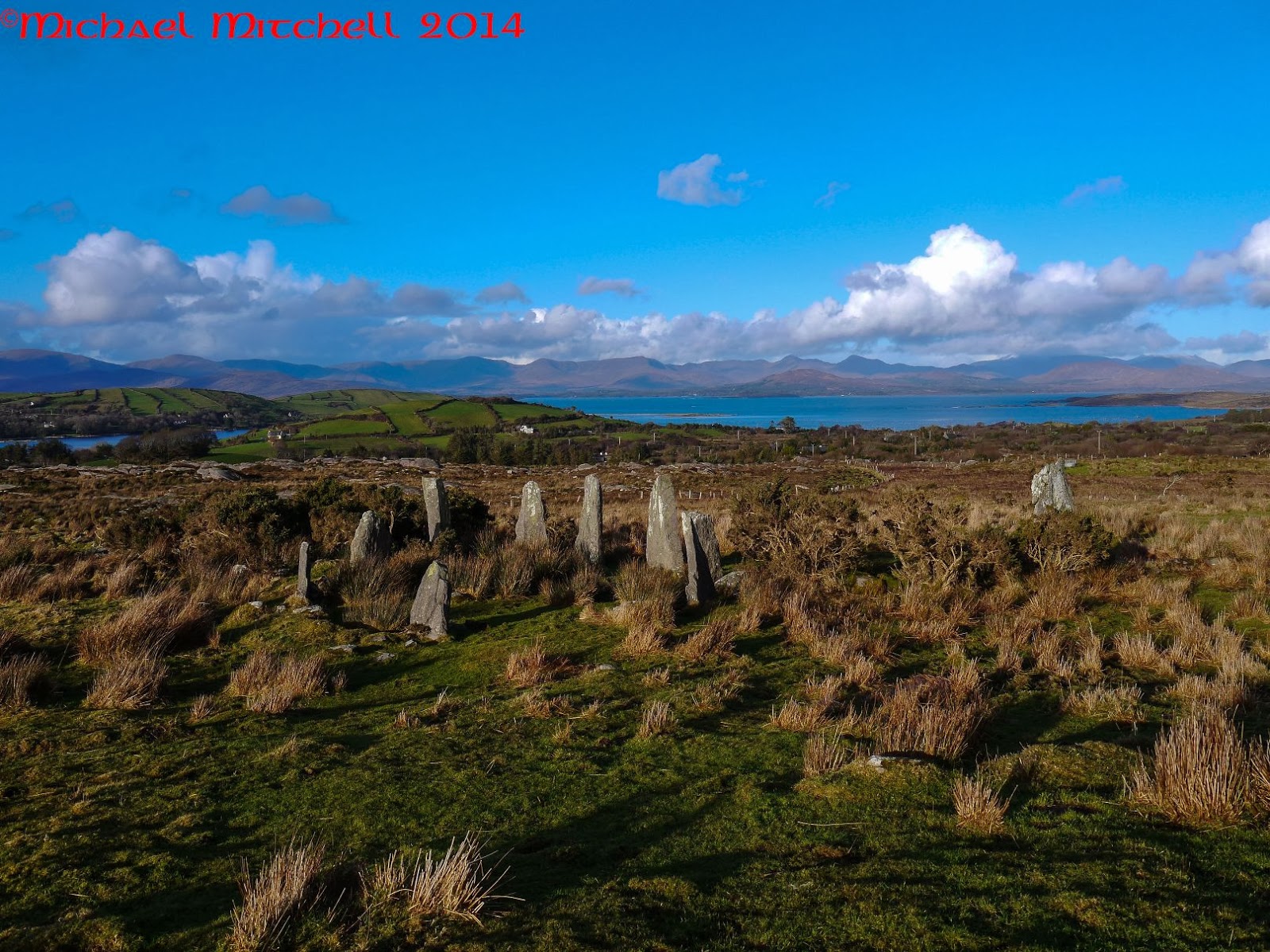 Someone has left a large horned Sheep skull in the circle, along with the large collection of various coins.
Nine pointed stones remain standing out of an original eleven. One has fallen and one is missing. The circle has an internal diameter of 7.25m and is aligned NNE-SSW (NMS) or almost due N-S (Jack Roberts). The Standing Stone is roughly 6m to the East and stands at 2.5m x 1.8m x 0.4m and is aligned NE-SW.
One day I will have to look for the other stones and burials high up in the hills of this Townland
But for now we head on into Kerry and to the Townland of Lehid.
On the Eastern slopes of Knockatee is what the NMS describe as a "megalithic structure". There are several slabs, some set at right angles some prostrate. Possibly it is the remains of a wedge tomb..... I don't really know. 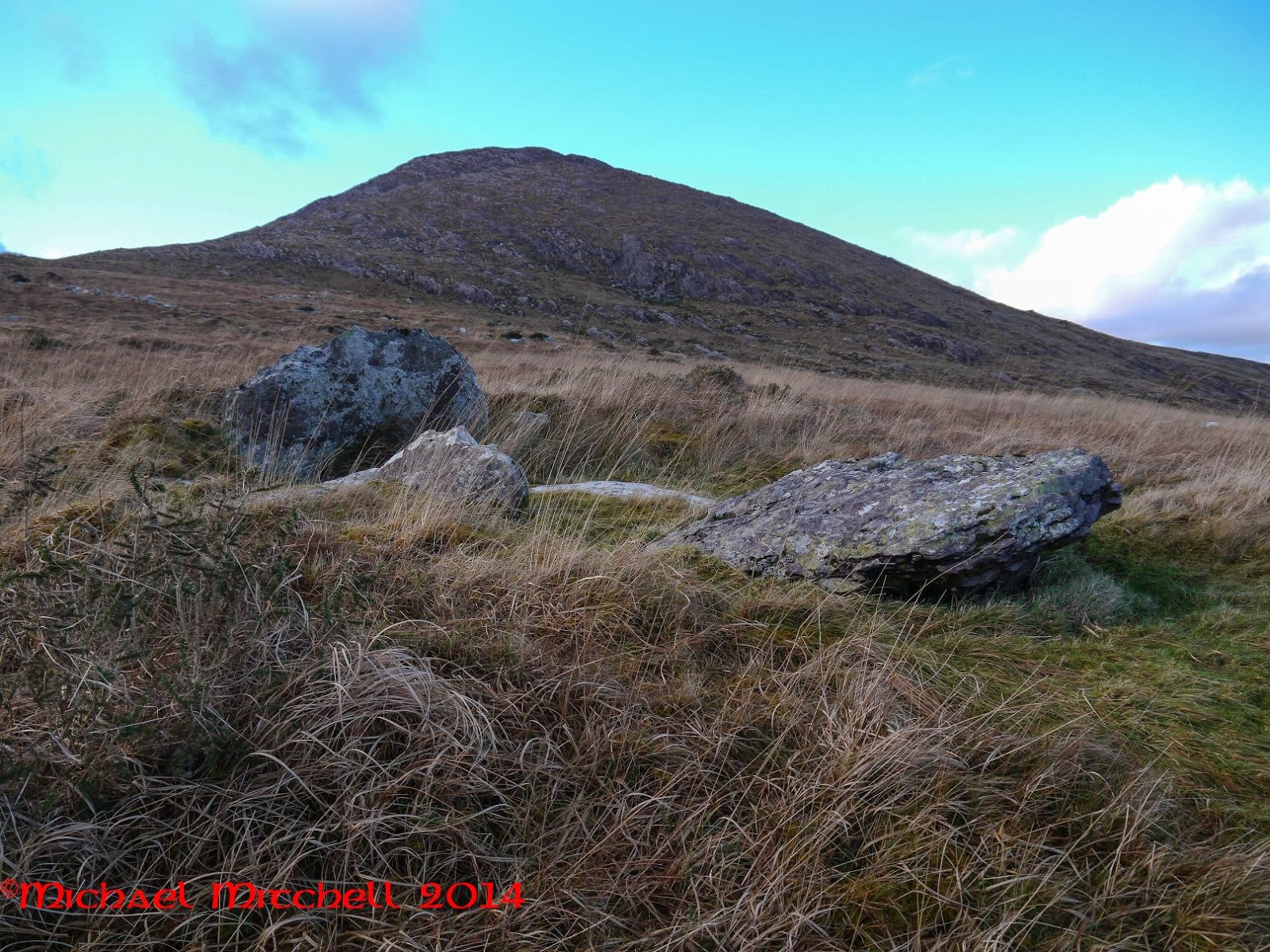 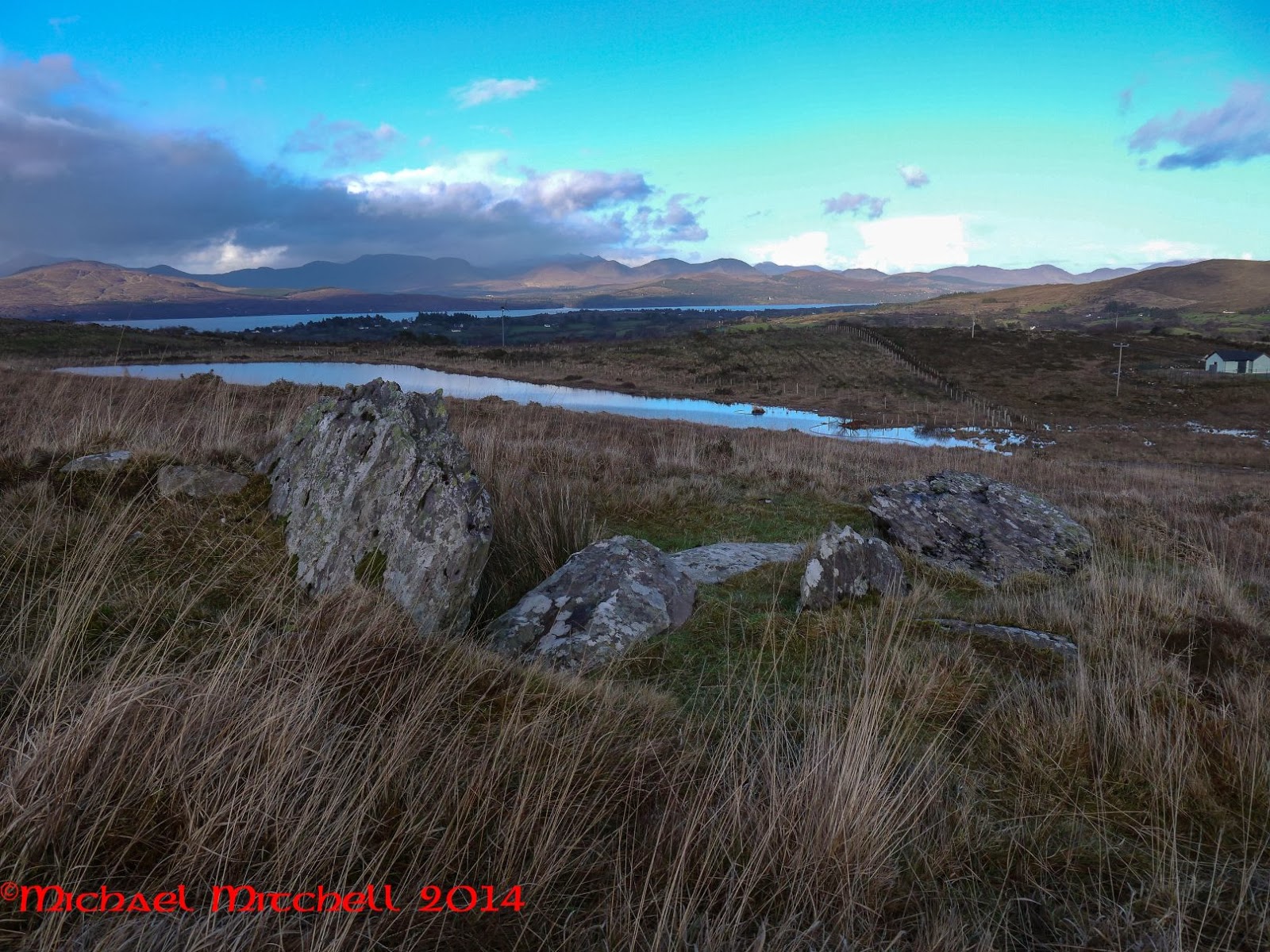 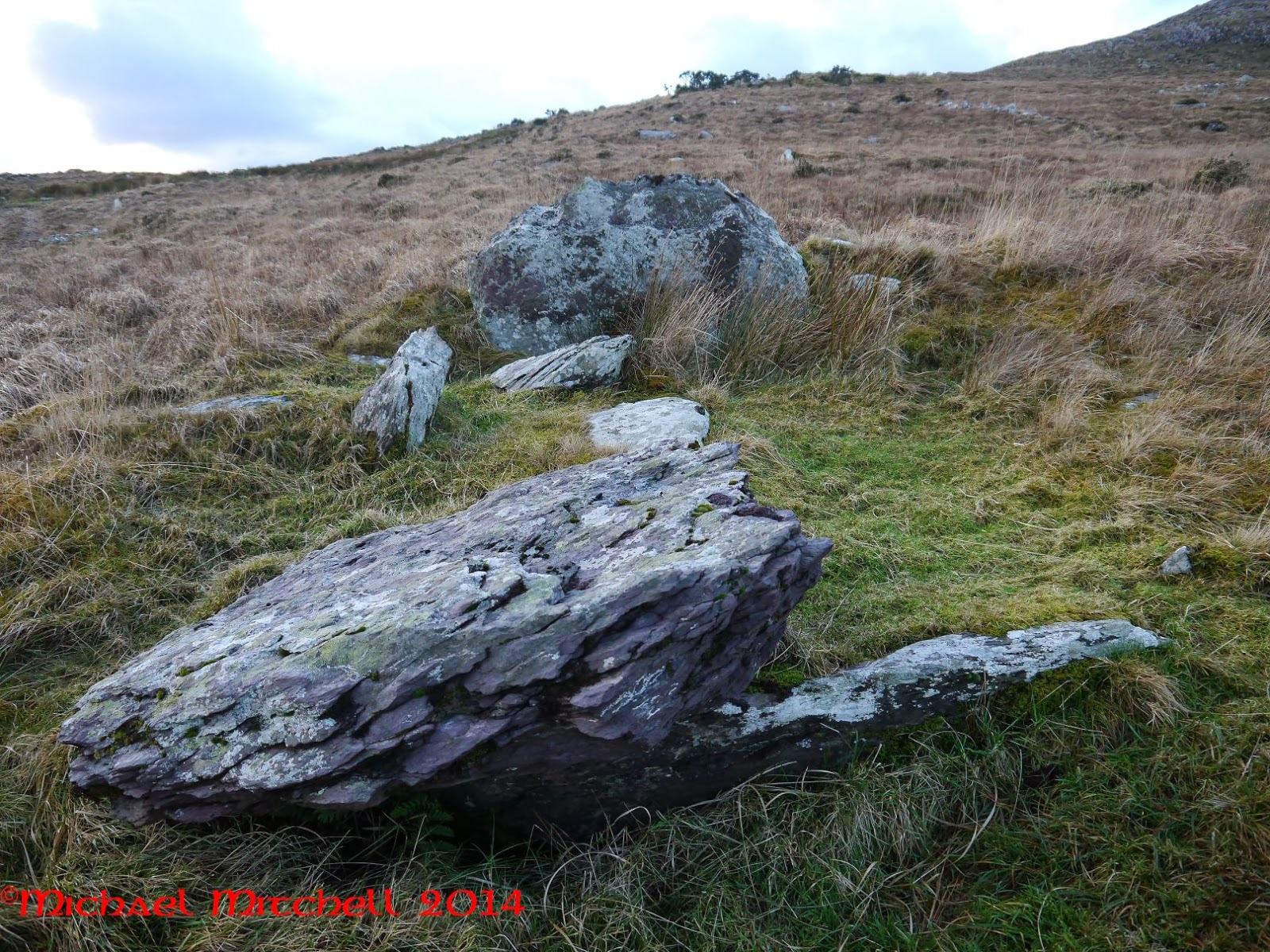 A few hundred yards down the road on the left hand side of the road, is a standing stone. It sits just inside a field guarded by Sheep. In fact the noisiest Sheep I have come across - they all had a really bassy bahhhhh.
The stone - 1.5m in height x 0.55m x 0.5m is aligned NNE-SSW and is just 30m from a boulder burial, which sits on the opposite side of the road. A second possible boulder burial sits close by.
From here, you can see Drombohilly Stone Circle up on the hill in the infant forestry, which will soon engulf it ! 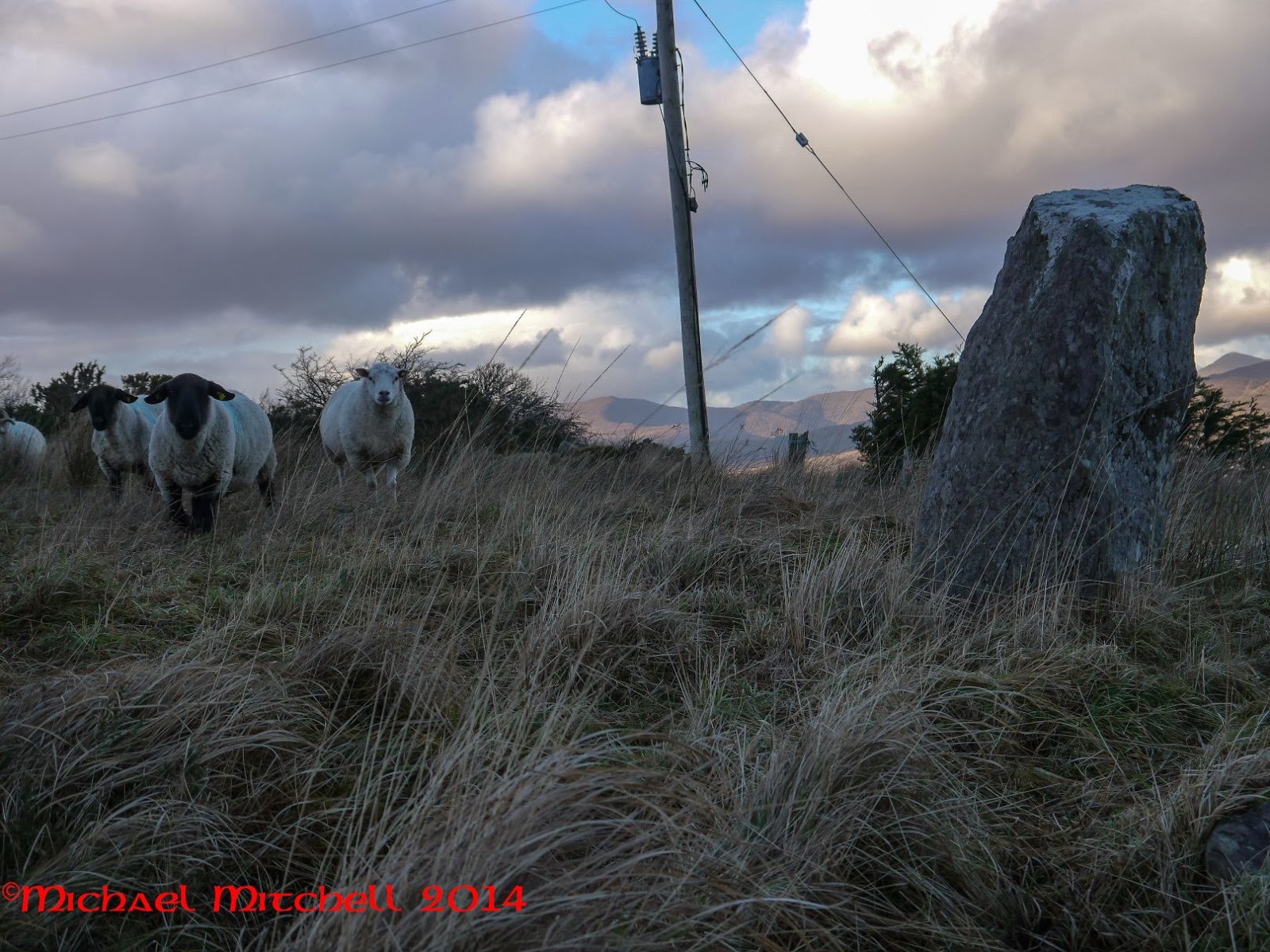 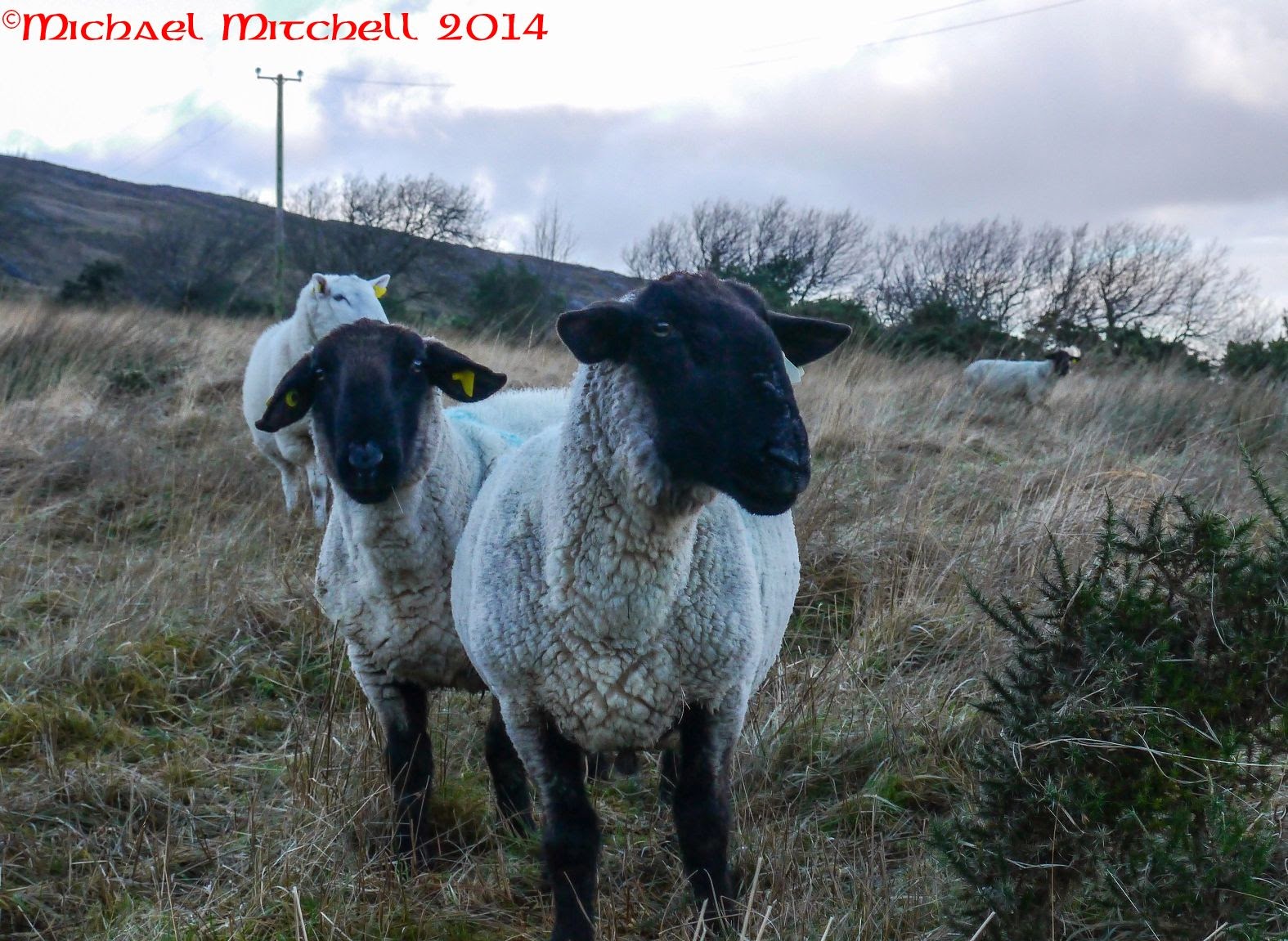 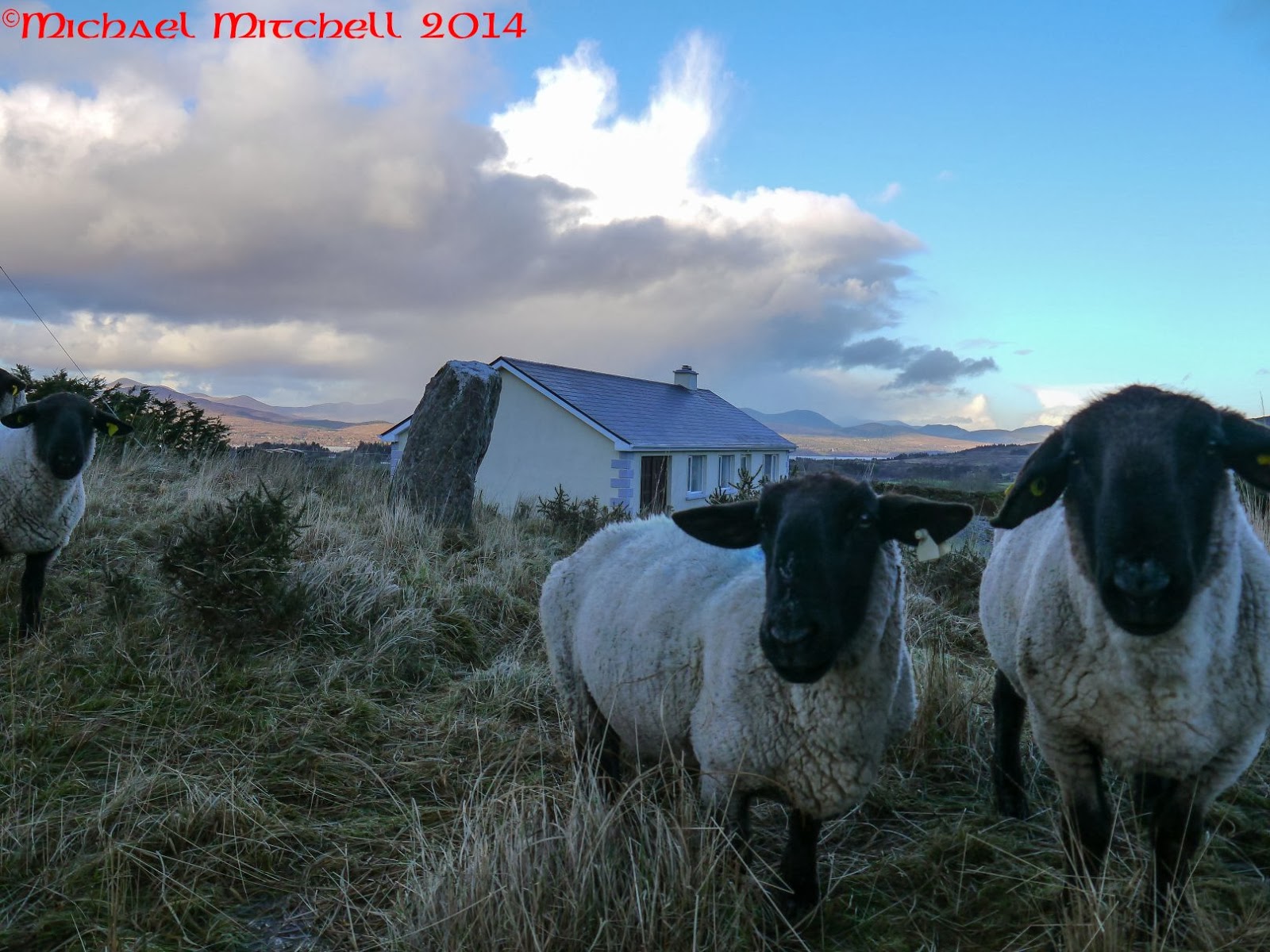 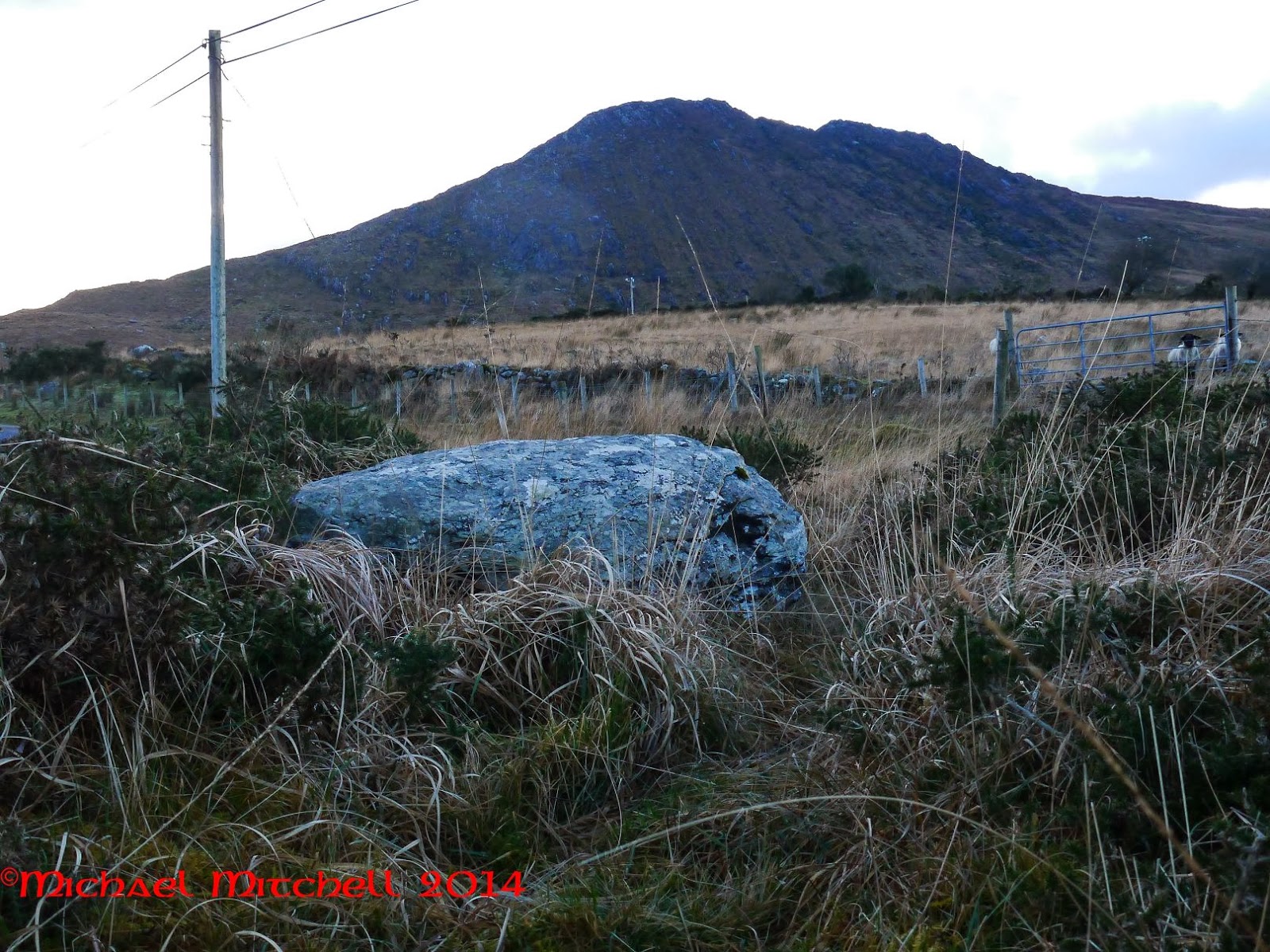 From here we head back up to the Healey Pass. The waterfalls coming off the mountains look spectacular in the late afternoon sun. One quick last call into the churchyard at Kilcaskan for the Ogham stone.The top of the stone is broken off so the inscription is incomplete. It reads "LUGUQRIT....... LONAS"  (Macalister). The middle part is missing due to the damage.
The sun is setting fast now, as we head for home. As usual it has been a fantastic day out on the Beara. 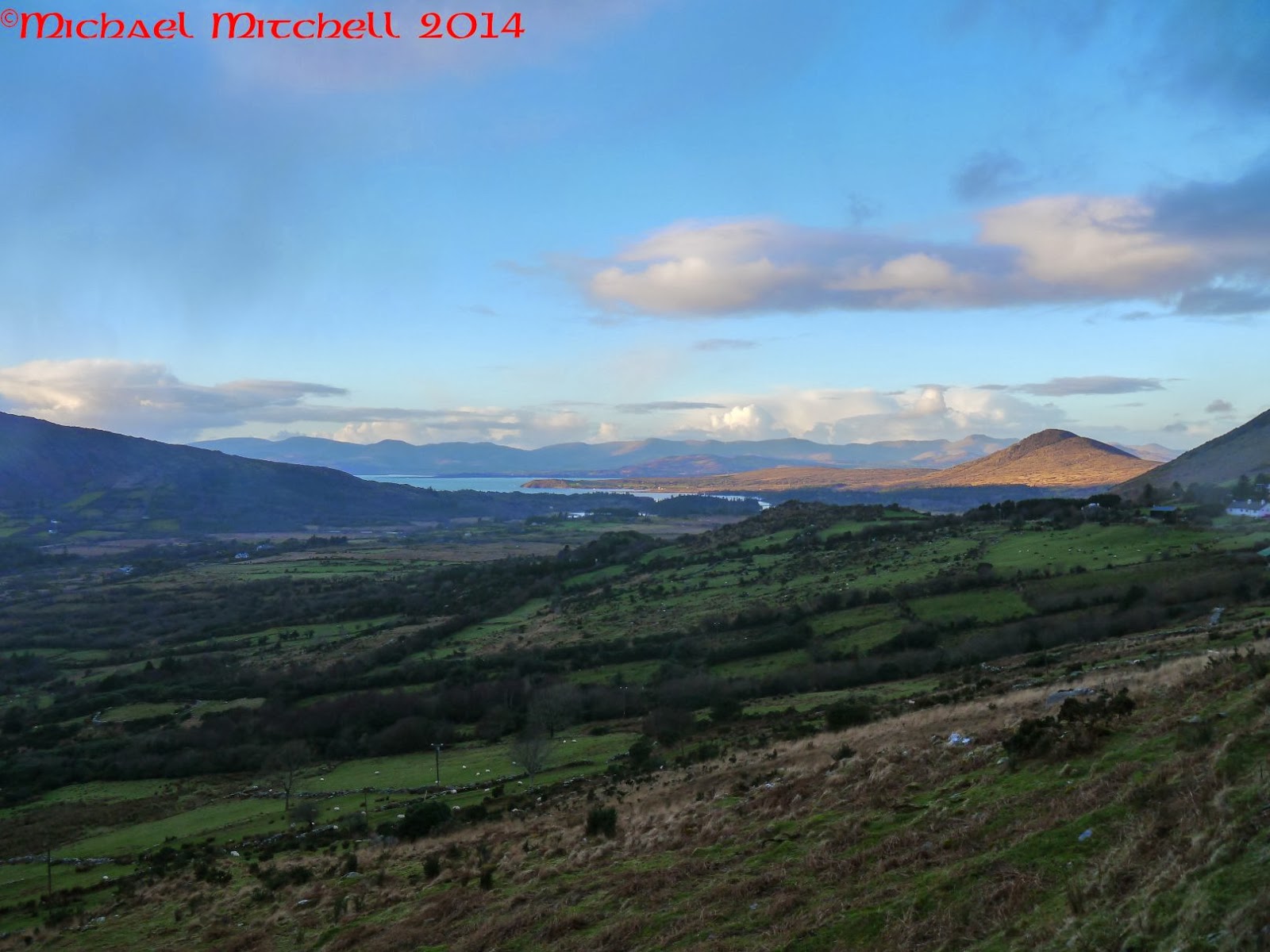 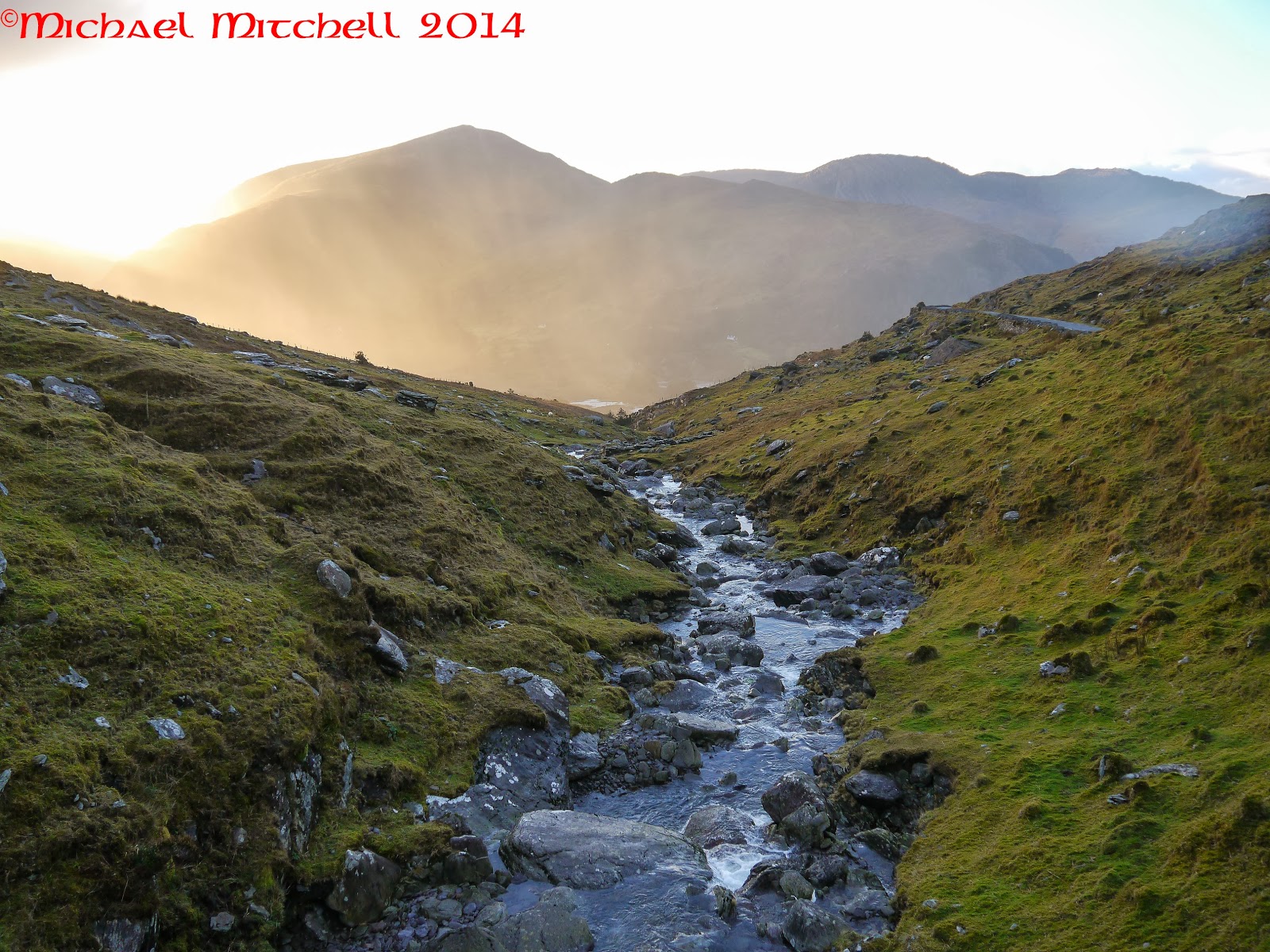 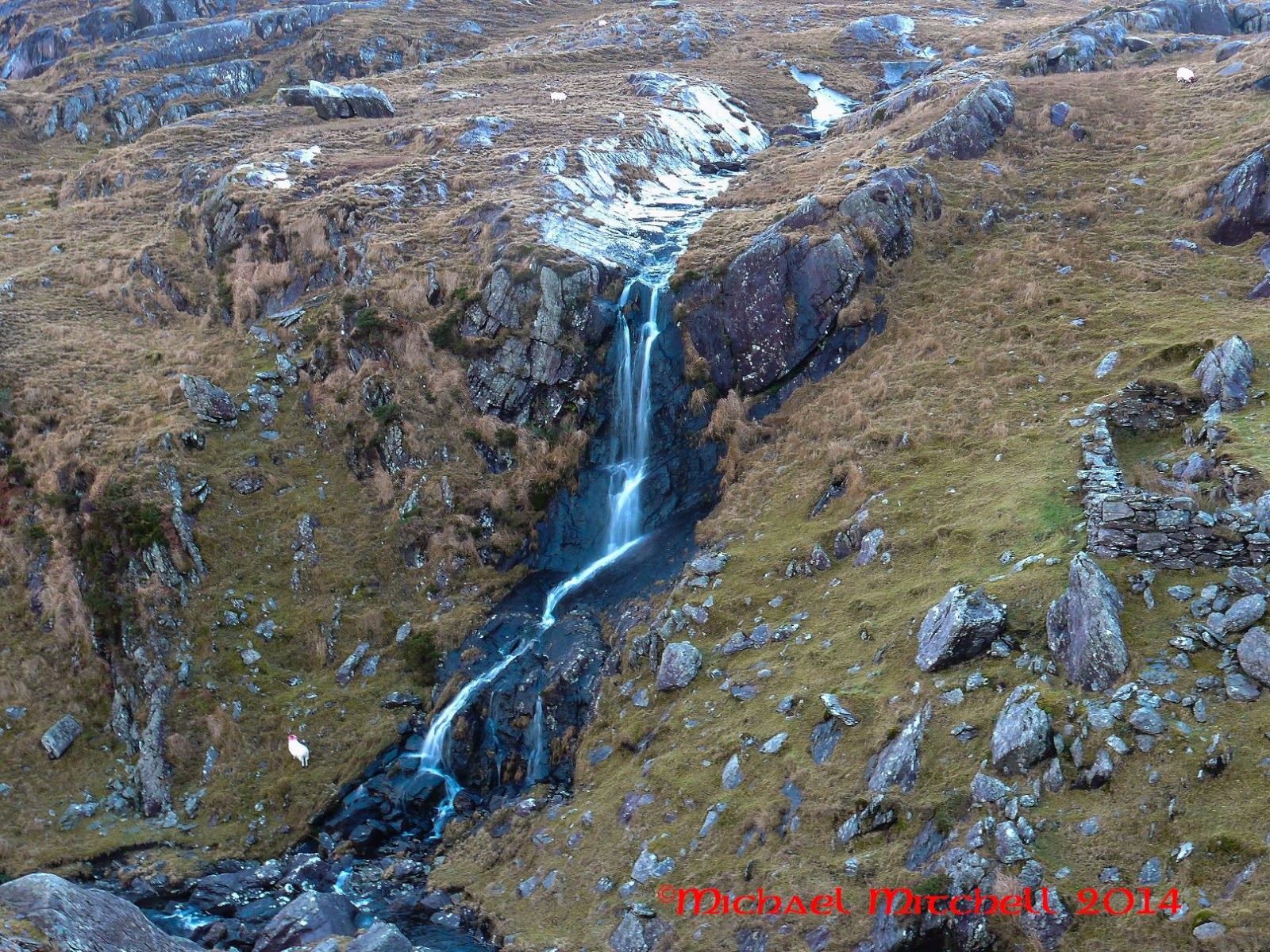 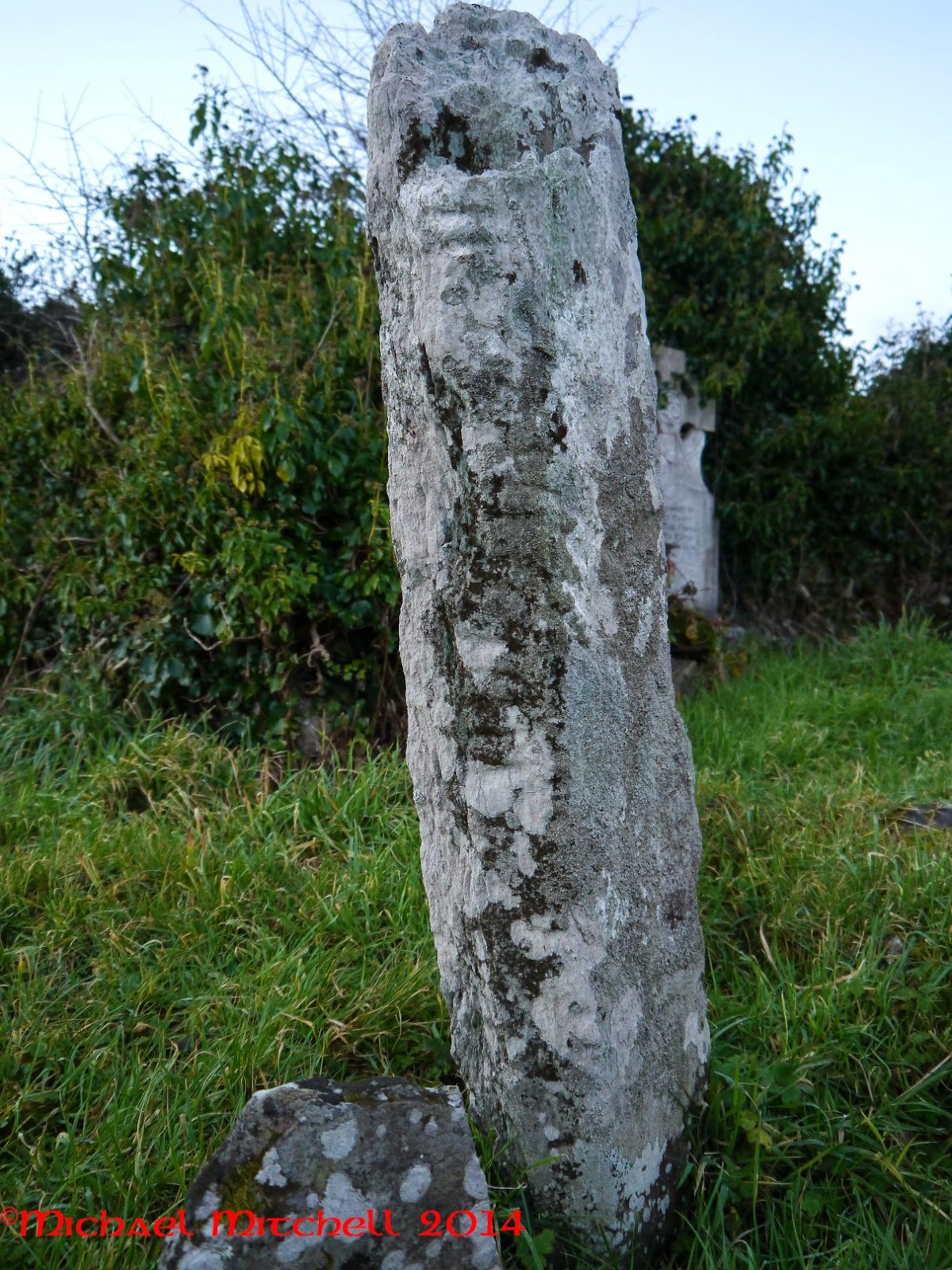 Posted by Michael Mitchell at 23:57