30th December 2013
Another trip around the Maughanaclea Hills today. This time, along the Northern side of the Mealagh Valley past the Kealkill/Breeny More turn off, to Gortnacowly Townland. There is a pull in with a track heading off into the conifer plantation on the hill and to Gortnacowly Four Poster Circle. The owners live at the small bungalow a few yards further on along the road.
Permission gained, we park up by the track and walk up the hill. The track crosses a small stream a little before it peters out. There is a field gate on the right (you can see a line of Holly trees). Through the gate, then keeping the line of trees to your right, there is a gap in the field hedge into the field containing the stones.
Unfortunately, only three of the four stones survive, but this doesn't detract from it.Once again, the setting is spectacular, with far reaching views down the Mealagh Valley and beyond to Mullaghmesha and Nowen.
This is one of only four accepted Four Poster sites in Cork. The others being - Maughanaclea (over the other side of the hill), Lettergorman and Cappaghboy Beg. So with this Gortnacowly, I have now visited all four. There is also one in Kerry (Reenkilla) and one in Wexford (Robinstown Great) as well as some identified in the UK. 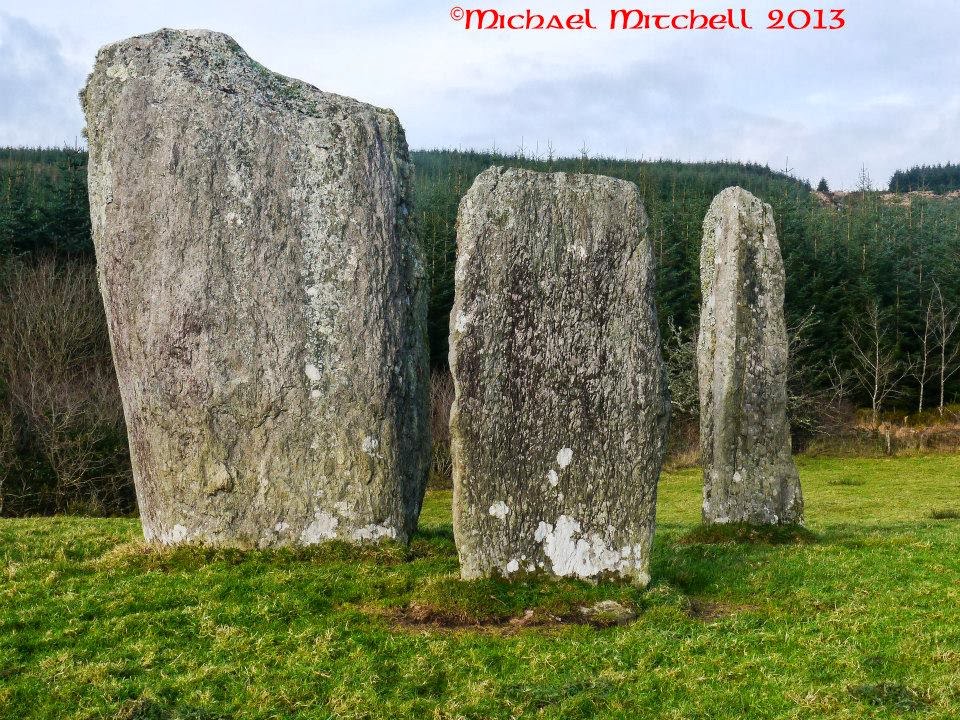 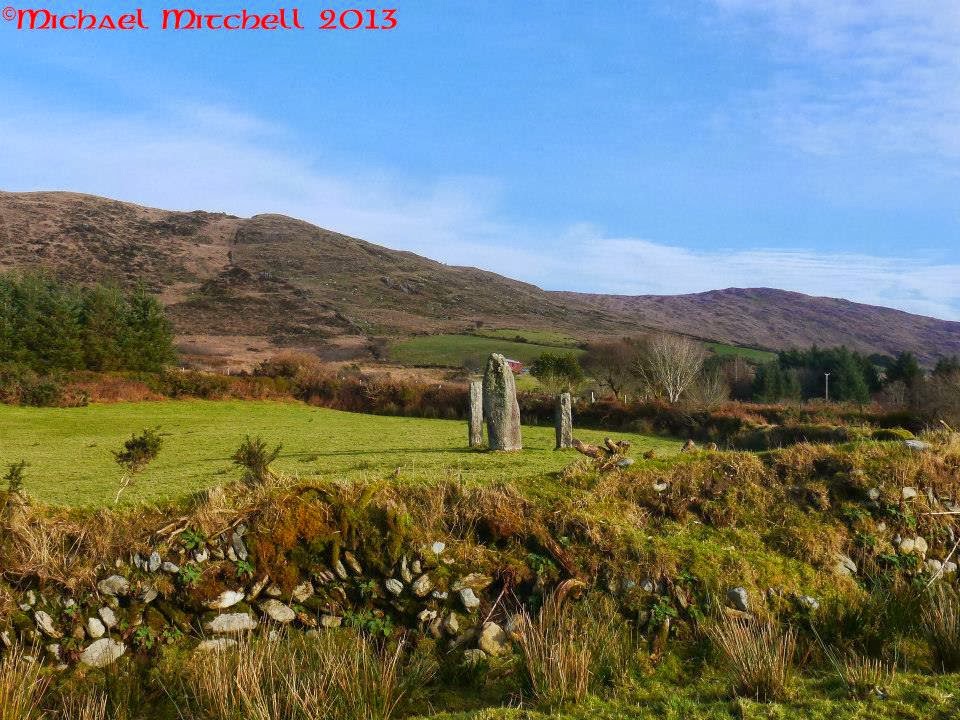 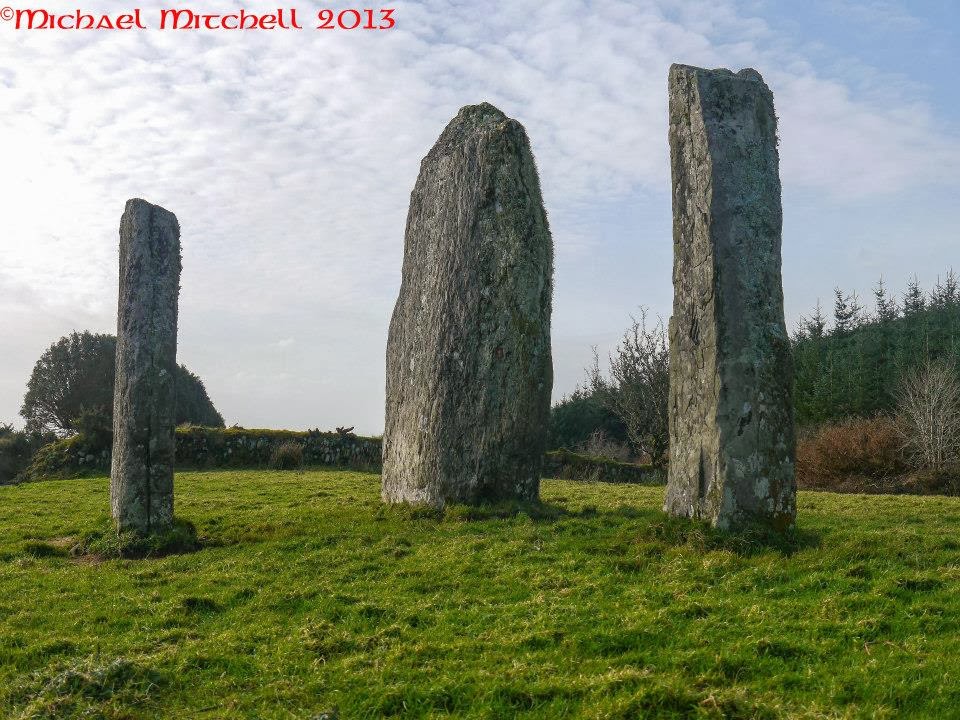 O'Nuallain states in his "Grouped standing stones radial stone-cairns and enclosures in the South of Ireland" (1984), that the fourth stone was present at least up until 1902, when it was recorded in the OS records as "four standing stones of Druidical antiquity"
The largest stone stands at 3.05m x 1.5m x 0.8m The second stone measures - 2.3m x 0.55m x 0.45m and the third 1.95m x 0.8m x 0.35m. O'Nuallain suggests that the setting would have been a trapezium, with two rows of two stones - both aligned NE-SW.
The familiar "Grok Grok" of a pair of Ravens overhead, alerts me to a Sparrowhawk, hedge hopping in search of dinner, before disappearing over the plantation.
Time to head back down the hill and a bit further along the valley. 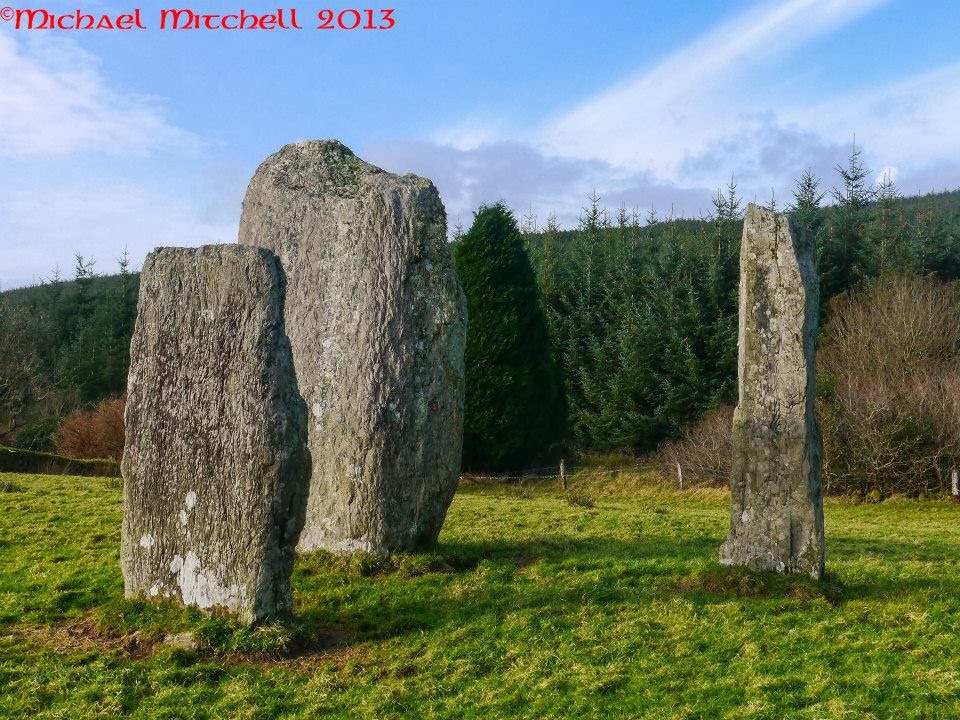 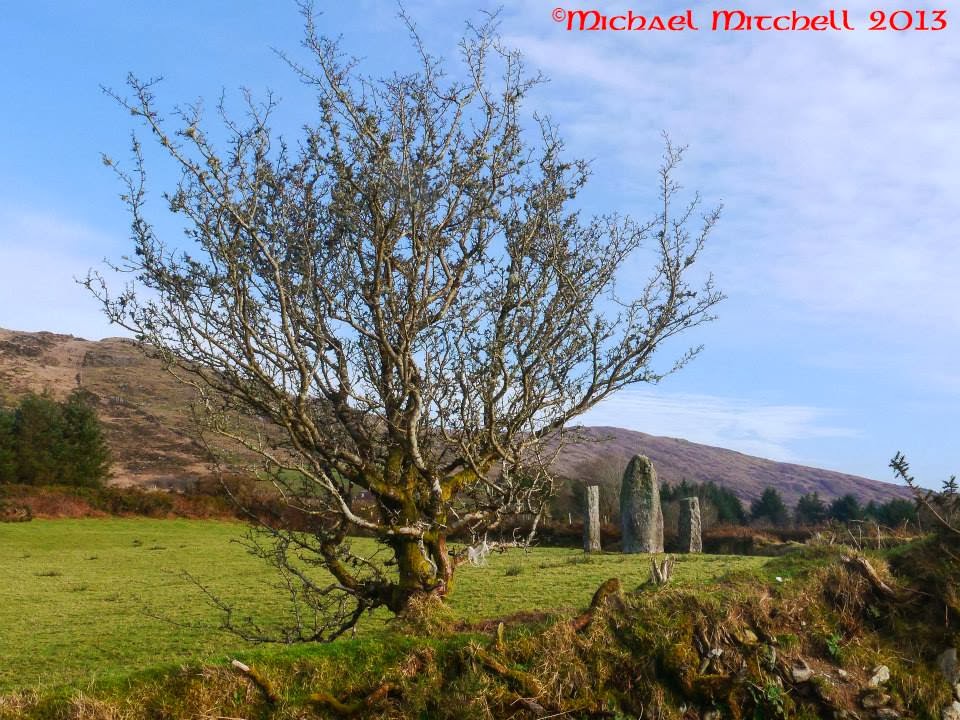 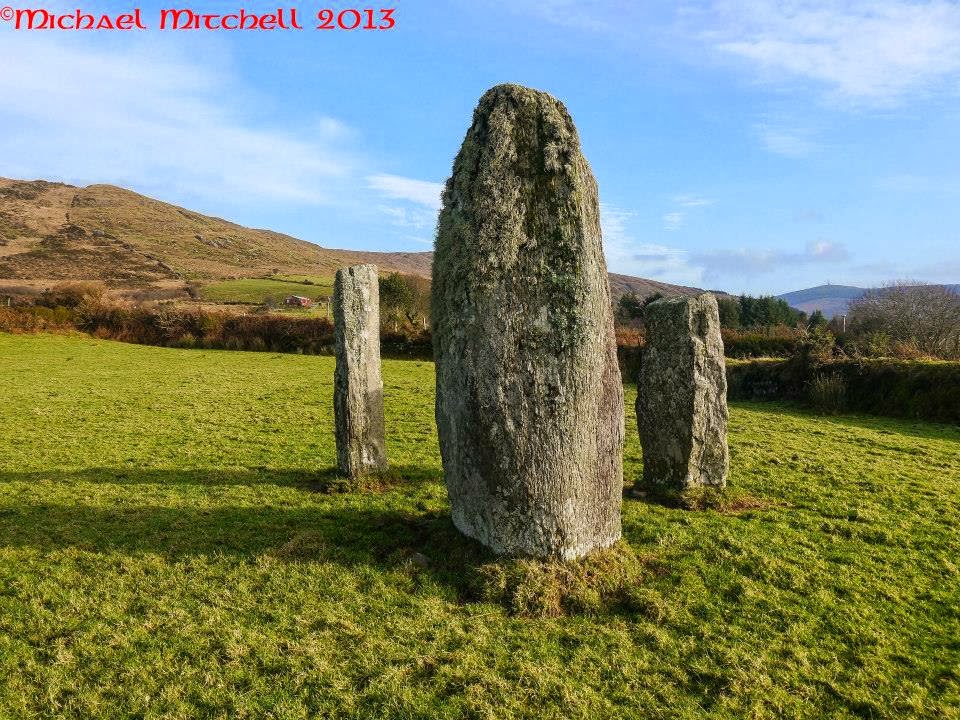 Next stop is the small parking spot where a section of Sheep's Head Way goes down through the woods. We are going to walk down as far as the Barnagowlane West Wedge Tomb.
After a week of heavy rain, the going is wet, A slight detour over a small bridge and I can see a standing stone in the next field. This is one half of a stone pair. The other stone having fallen.
Back to the path and along the stream to the bridge that crosses the Mealagh River. Then along a little before veering off on the spur to the wedge tomb. 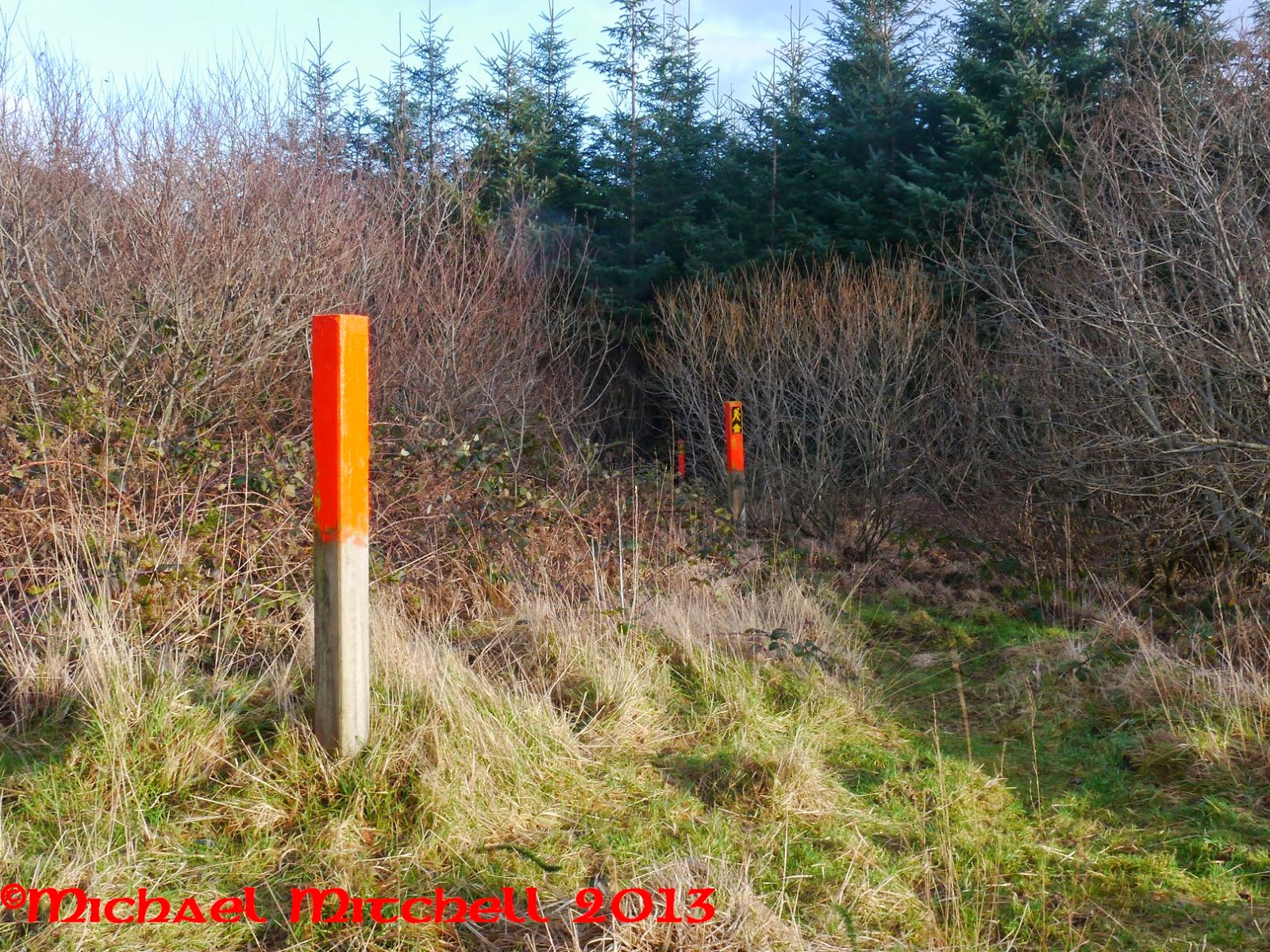 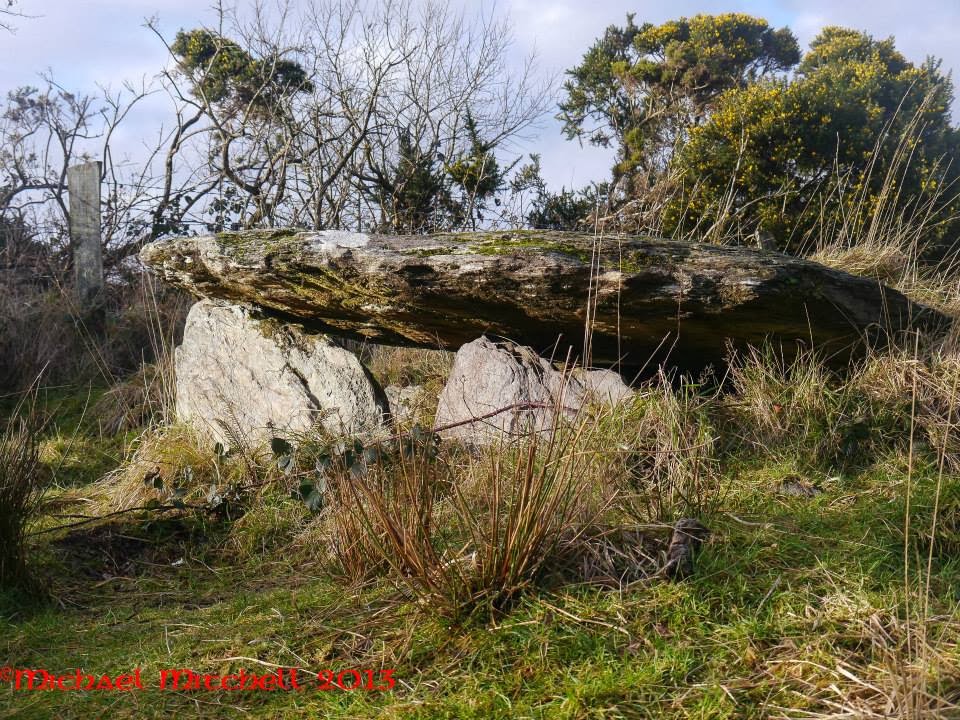 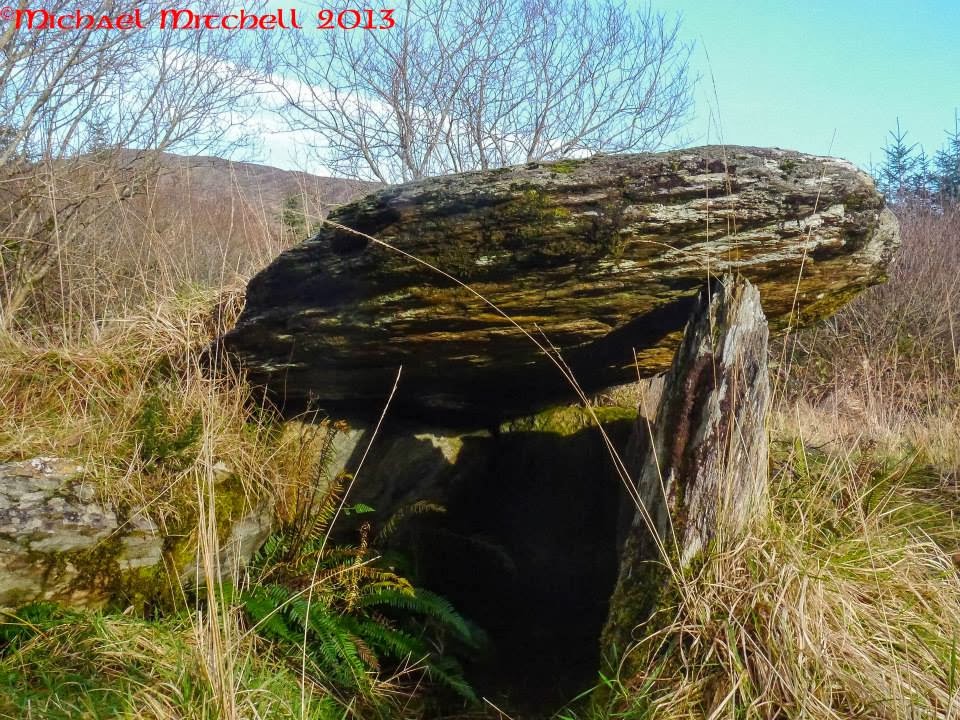 The spur takes us off through the dark conifers. The path is seriously wet and boggy and the tree trunks are covered in green slime. Eventually we come out into a clearing and there is the charming little Wedge Tomb of Barnagowlane West. I have been here before, but it's J's first time and she takes the opportunity to do a little bit of dowsing, while I take some photographs of the area.
We head back through the peaty bog and green slime to the car and drive round to the other side of the valley before taking the wonderful little road up the Eastern side of Mulaghmesha to the newly renovated Castledonovan.It's good to see that the scaffolding and blue sheeting which had covered the castle for so long, has now gone,, A quick stop here, before heading back to Skibb and home.
Refs and further reading -
Jack Roberts - Exploring West Cork 2009
Sean O'Nuallain -  Grouped standing stones radial stone-cairns and enclosures in the South of Ireland 1984 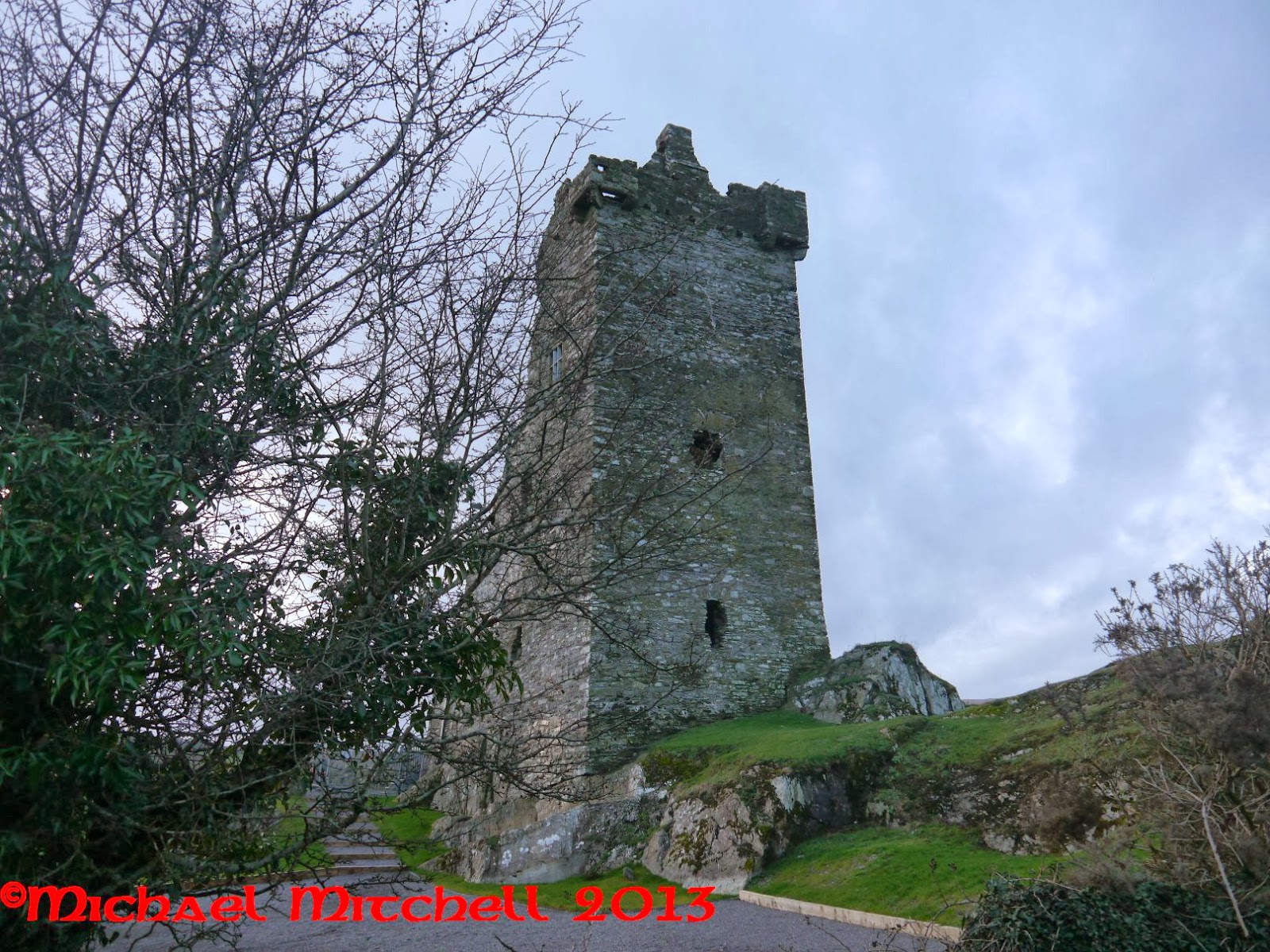 Posted by Michael Mitchell at 22:22