July 15th 2014
Another drizzly start to the day, but the forecast is to brighten up, so I take the chance and head off up towards Glanbrack (An Gleann Breac - the speckled Glen), which is a little North of Reenascreena.
This area is rich in megalithic remains - all of which seem to focus on the hill called Carrigfadda (An Charraig Fhada - long rock), which although only 311m (1022 ft) asl, dominates the local area.
The route to Glanbrack takes me past Maulatanvally stone circle then taking the next right and following the lane past a right hand turn and a house on the left, just beyond of which is a small layby by some forestry. Back a few yards on the opposite side of the road is a gate leading to a track. Follow the track up (which is quite overgown in places) This will eventually lead to Glanbrack circle in a field to the right. Accompanying the circle is also a Stone Pair. This small alignment is set NE-SW and is around 3.5m from the circle. Both stones are of a similar size - around 1m in height. 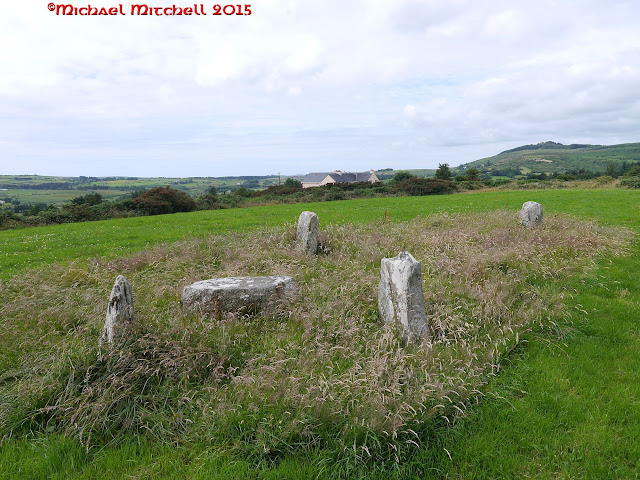 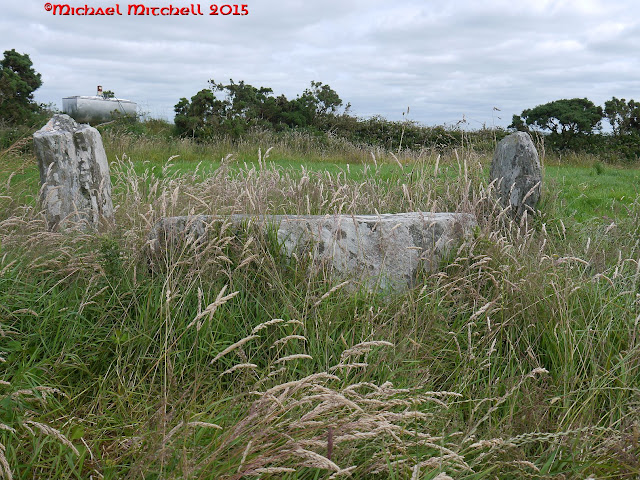 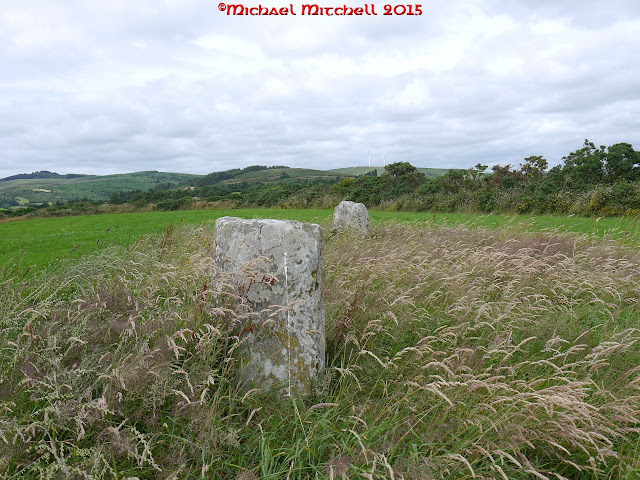 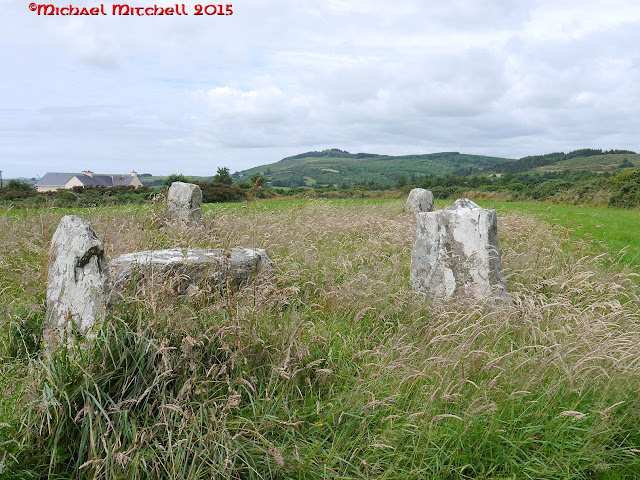 The circle - is a small Five stone circle, but the axial and two flanking stones are all that are present. There are no portal stones.. Jack Roberts, in his wonderful books about the circles of Cork and Kerry, wonders whether this is exacty how it was built. The most basic and minimal circle in Cork !
Carrying on along the lane there is a left hand turning which leads to a small crossroads. Going across here leads to Knockawaddra (Cnoc an Mhadra - hill of the dog) Townland.
After a few sharp bends, there is a farmhouse. Luckily a lady is outside gardening and I ask permission to go to visit the two stone rows on the farm.
Permission granted - I head off down the farm track until I come across the first Stone Pair.
Aligned ENE-WSW they are of a similar size. The larger SW stone is 1.55m x 1m x 0.6m. The NE stone 1.2m x 0.8m x 0.5m. 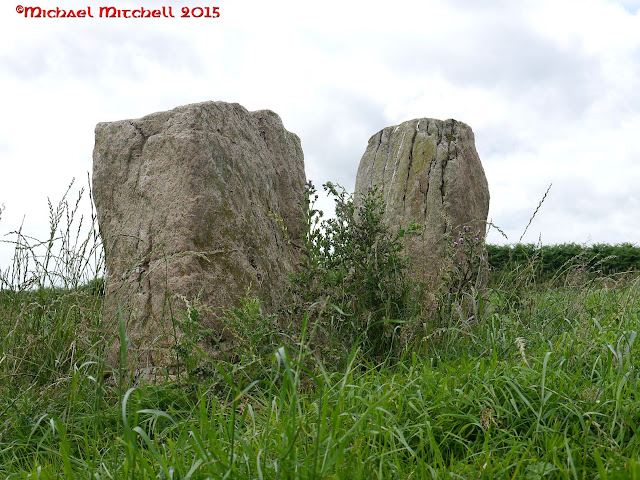 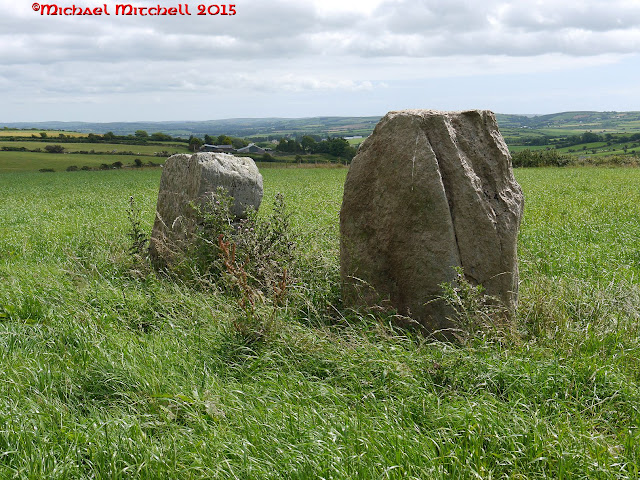 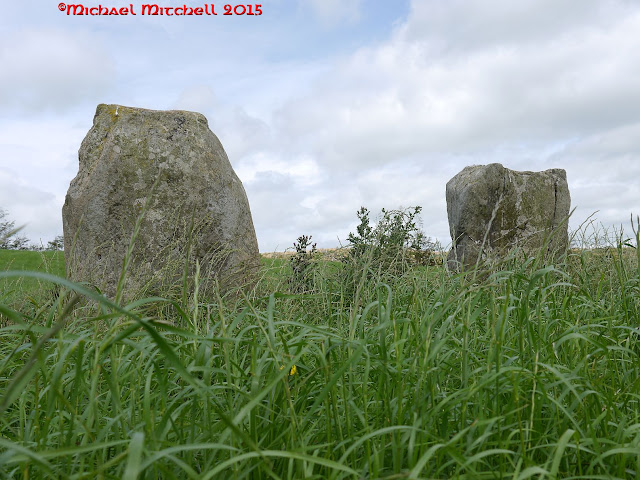 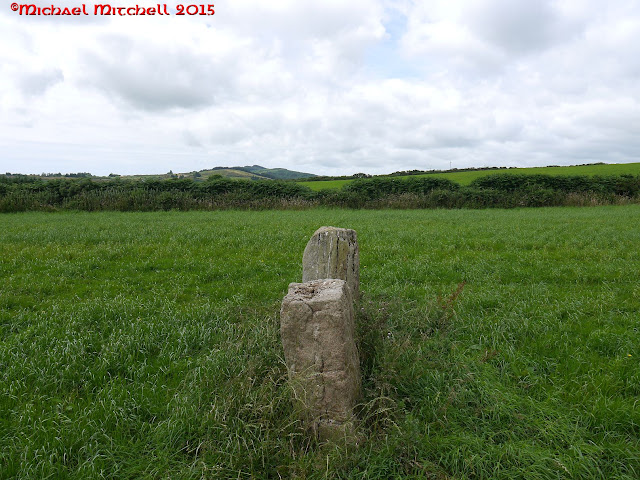 In the next field about 200m to the WNW is a Stone Row. Made up of three stones and aligned NE-SW, and graded in height - from the smallest (which has become overgrown with brambles) at just 1.1m. The middle, at 1.55m and the largest at the NE, standing at 2.9m. 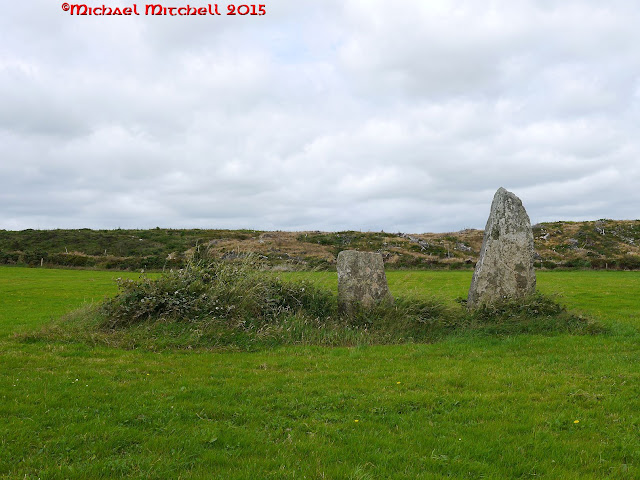 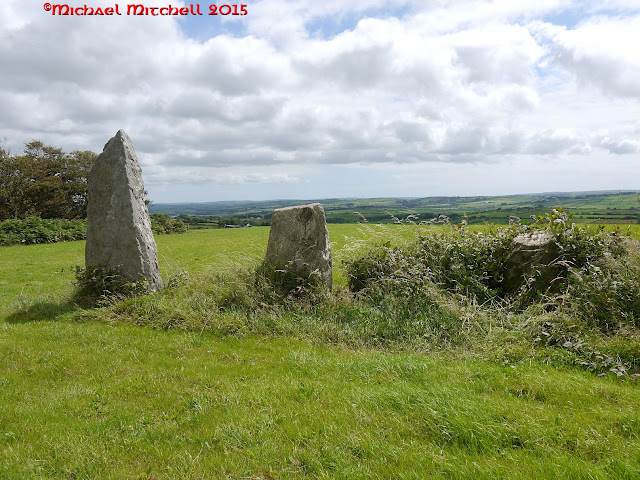 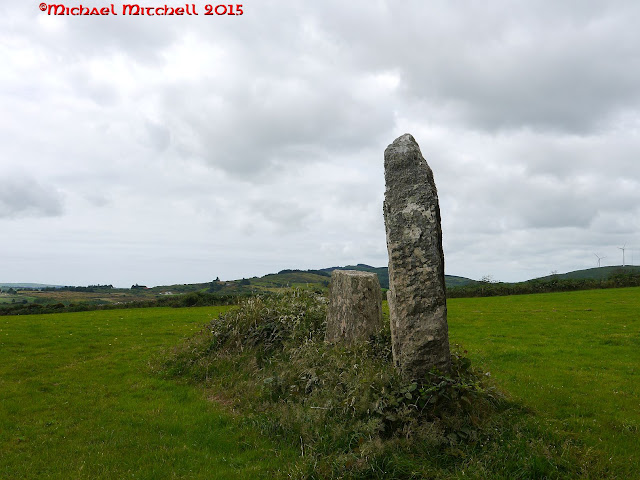 As I'm up this way - I might as well have a look over at Milleennagun (Millín na gCon - Hillock of the hounds) for the wedge tomb and standing stone. Arriving at the nearest farm, the farmer is just passing on his tractor and gives me directions to the wedge tomb. There's parking along the road a little and I head back to the field gate and into the field. The wedge tomb is a little overgrown with the usual mixture of bracken and brambles making it barely discernable. A Hawthorn tree has established itself at one end. The standing stone is situated in the next field, divided from this one by a green lane. The lane is practically impassable so a few barbed wire and electric  fences have to be negotiated. I noticed a large stone laying at the fields edge in undergrowth, looking very megalith like. Who knows - could it be a fallen and forgotten stone ? 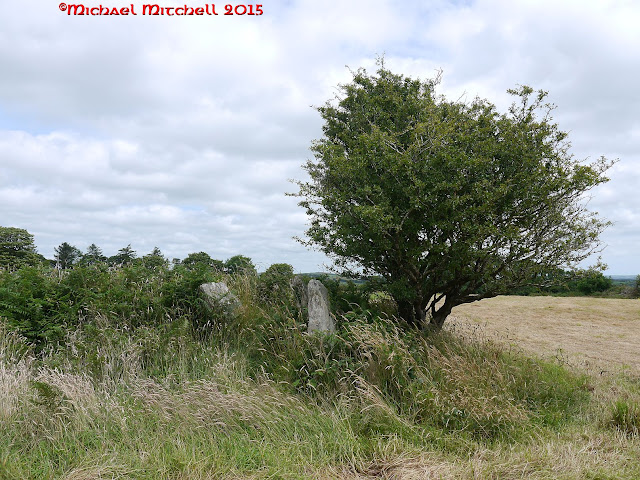 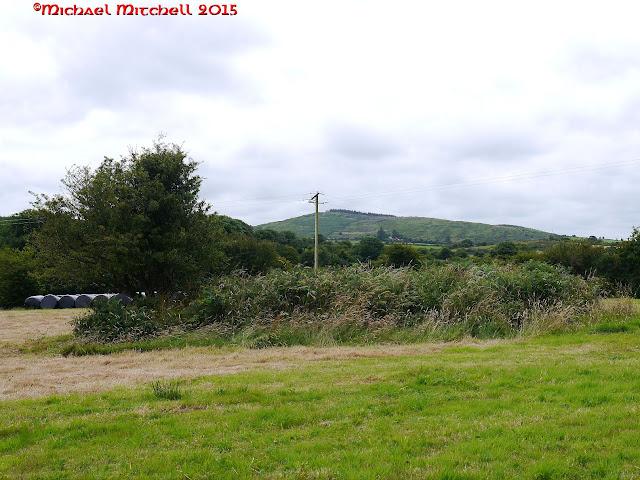 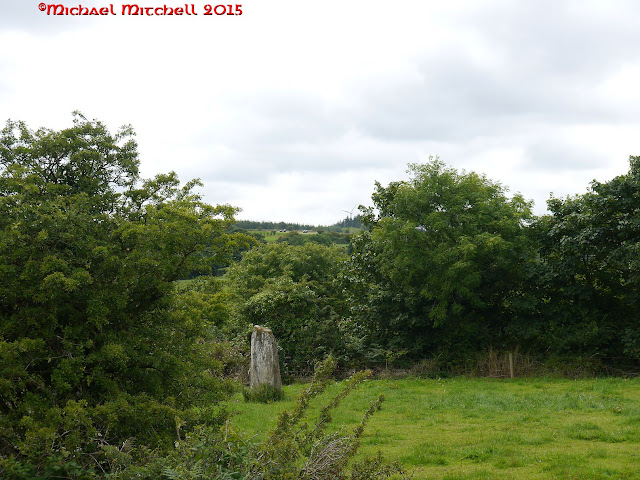 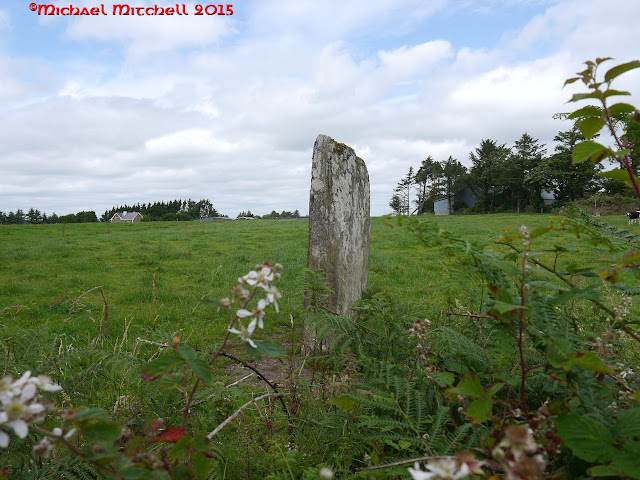 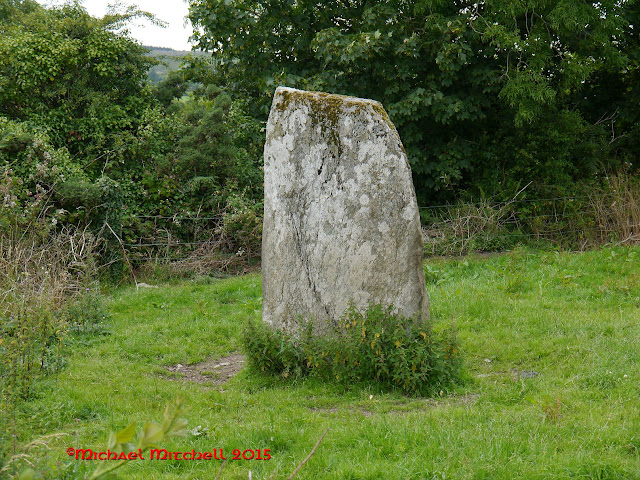 Anyway, I eventually catch sight of the Standing stone,and attract the attention of a group of curious cows, which are in the field. The stone is quite impressive - standing at 2.25m x 1.6 x 0.3 and set NNE-SSW.
One more stop before heading home - Ahagilla or Bealad Stone Circle.
This circle is in a miserable state. Three stones survive, some of  the rest are just dumped along with a whole load of field clearance stones, in the middle. It's difficult to work out how many stones there were originally. Not much more you can say really ! 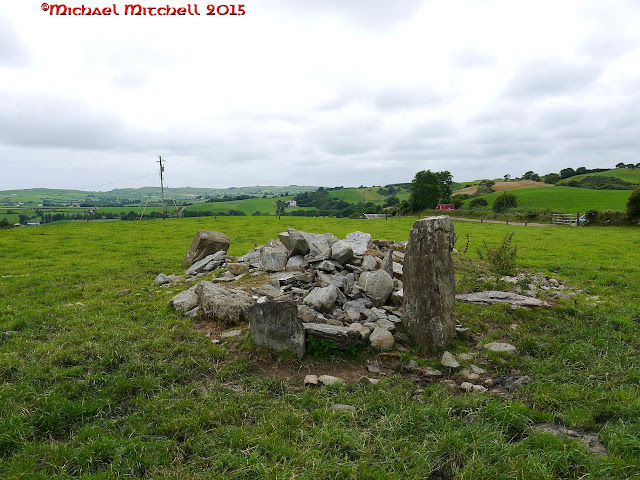 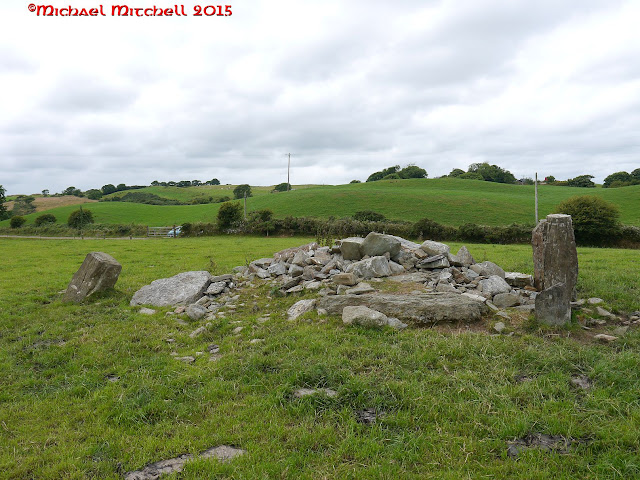 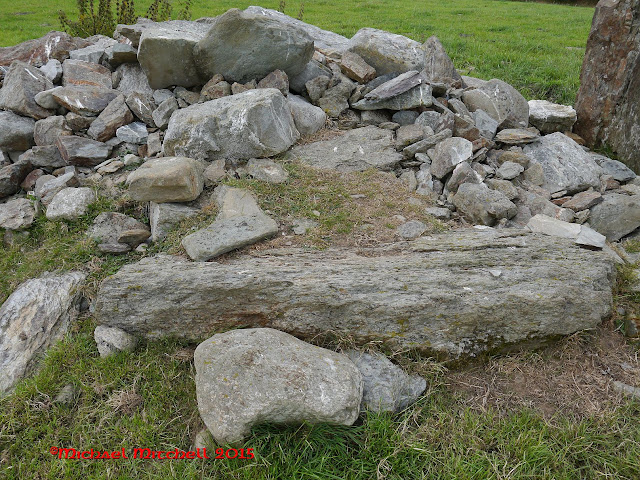 Posted by Michael Mitchell at 20:41