12th September 2014
We are heading up to Devon today, but are going to take a slow journey and call in at a few places en route. It's an early start again - the B&B serves breakfast at 8:00 am (no leeway), so there's been no chance of a lie in at all.
Not far to go for the first stop of the day - just a couple of hundred yards up the road to the church at St Just. Just a pop in to see the Selus Stone. Believed to date back to the 5th or 6th century, it bears the inscription - SELUS IC IACIT - "here lies Selus" The letters NI have been added above the LU of Selus, but it is not known whether they are contemporary with the original or a later addition ! 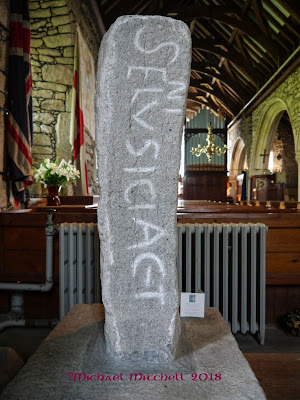 We are going to take the long route back today, via the Lizard, rather than heading up the A30. There are a couple of stones, that I've not seen before - and of course some beautiful scenery.
Goonhilly Downs, is a wonderful Nature reserve and designated SSSI, in the middle of the Lizard Peninsula. There's a car park, several information boards and some well laid out paths.
The area is dominated by the satellite dishes of the Earth Tracking Station and having followed one of the paths from the carpark to find Dry Tree Menhir, it is strange and almost surreal to see the high tech modern and the ancient, divided from each other by a wire fence.
Dry Tree menhir is a large 3m stone. It was re erected in 1928. Apparently, some troops were starting to chip away at the fallen stone and broke a slab off for road mending, when they were stopped by Sir Courteney Vyvyan & Colonel Serecold.
The stone is made of Gabbro, which is found on Crousa Common a few miles away. nearby are three Barrows.
Birdwise, it was quiet - just a handful of Chiff Chaffs, some Blackcaps, Bullfinches, Long Tailed Tits, Stonechat, Kestrel and 15 Golden Plover flying around 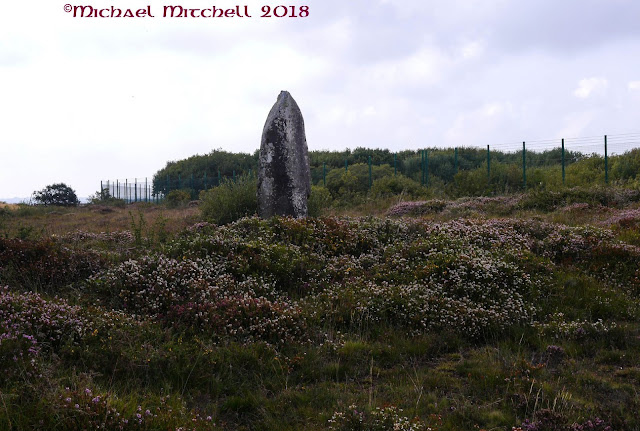 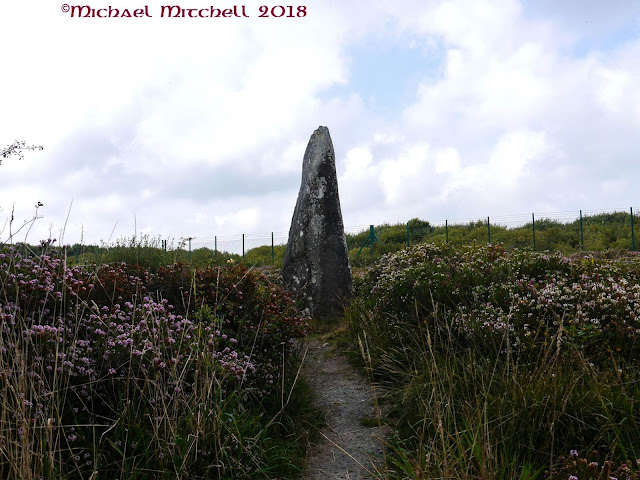 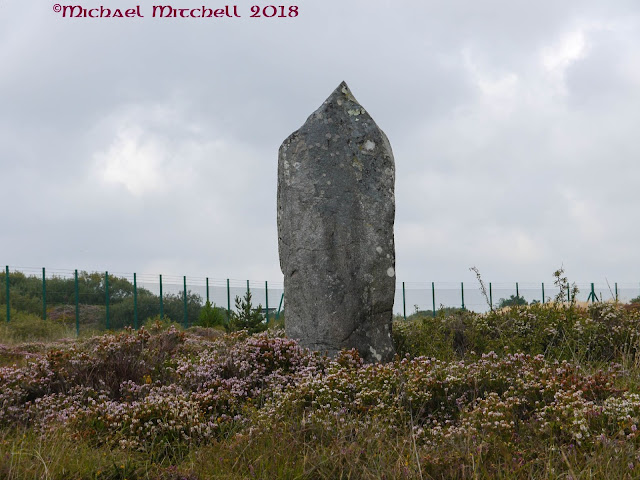 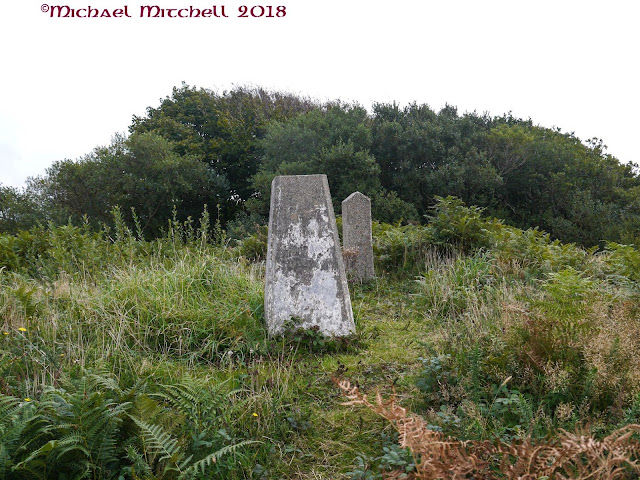 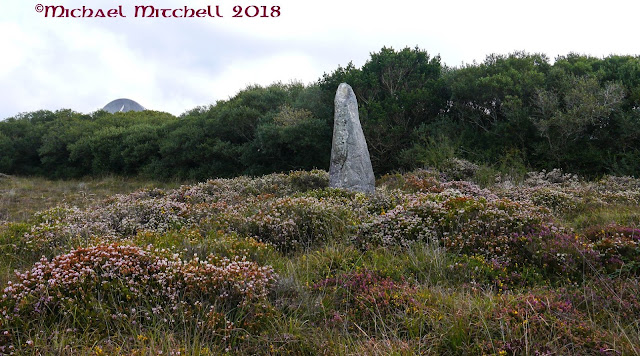 Next, we head over to Crousa Common. Theres a spot to park at the cross roads by the common. A stone pair sit on the Common, but finding a way to them is seeming impossible. Walking along the road, I can make them out over the hedge. One is standing and the other has fallen. There does seem to be a gate into the very large field down at the far end, but there are a lot of horses in there, so I have to make do with a long range photo over the hedge. It's a shame, as the standing stone looks quite large. Next time !!!! 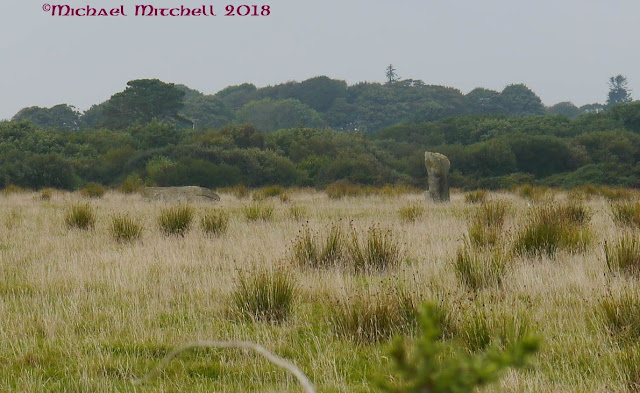 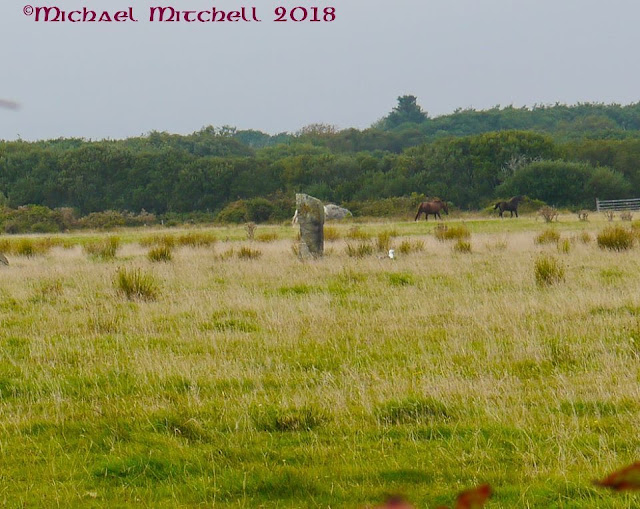 Moving on, down the minor road, which skirts the Common, a right turn takes you along a narrow lane and as the road takes a sharp right, there is room to pull the car in. A stile takes you on a footpath through a field to Tremenheere Standing Stone. The Farm here, obviously taking it's name from the stone. The stone is 2.9 metres high and sits half way across the field, which today hosts a large herd of rather frisky Bullocks.Well discretion being the better part of valour, it looks like it's another long range shot and another return visit. 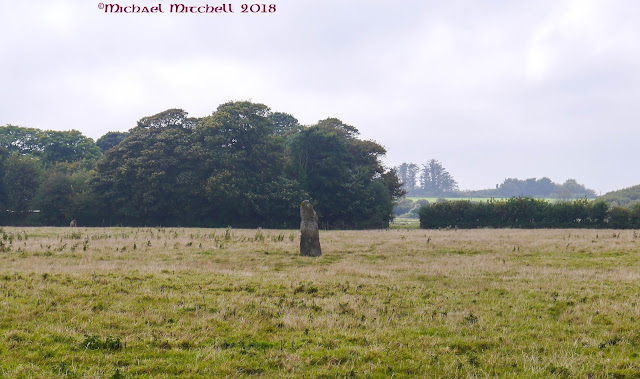 Seeing as we are in the St Keverne area, where better for a spot of lunch and especially, an Ice Cream, than Roskillys Farm.
Back on the road and heading cross country towards Praze an Beeble. Carrying on towards Camboren and taking a right near Killivose  and towards Treslothan.A sharp right (a little way past Treslothan Church) brings you to Carwynnen, where there is a pull in on the right. There, visible in the field sits the recently reconstructed Carwynnen Quoit. A pleasant walk through the meadow brings you to the quoit. It had collapsed into a big pile in the 60's but now stands tall and proud thanks to the hard work of the Cornwall Archaeology Unit. The Capstone was lowered into place on the 21st June 2014, just a few months ago. 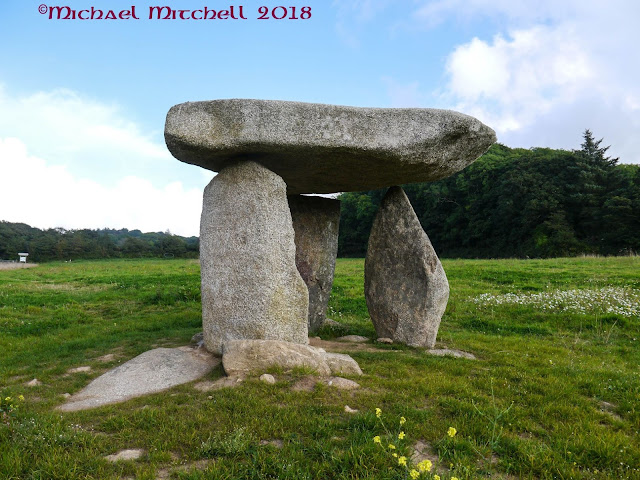 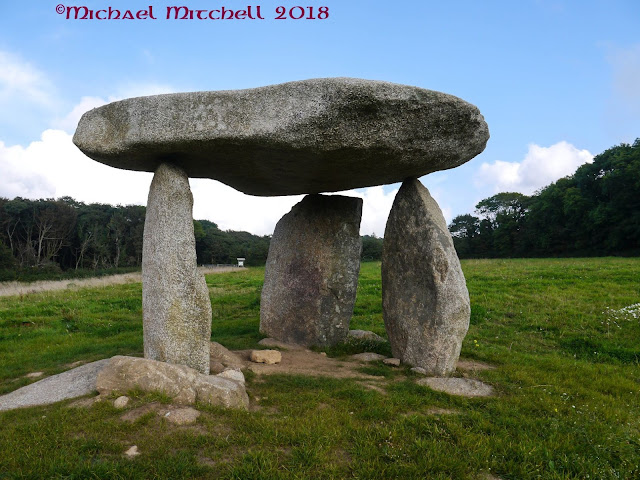 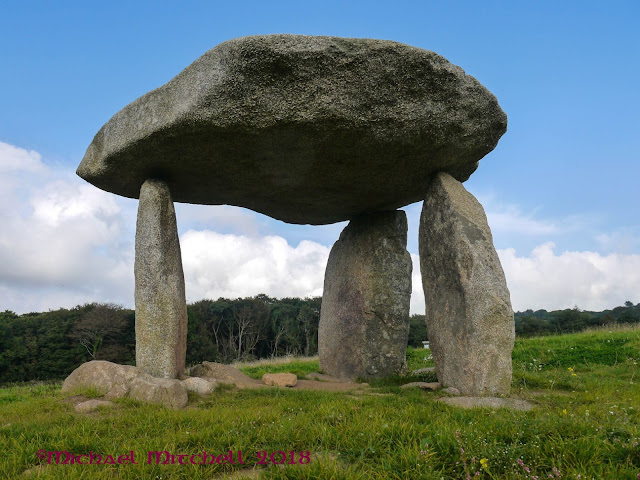 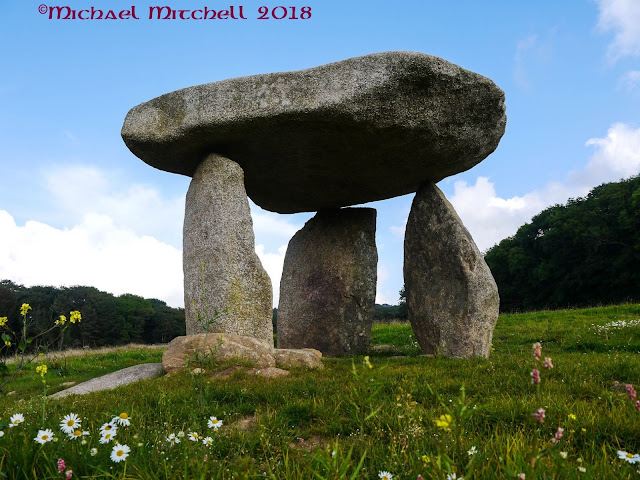 Carry on down the lane and rejoin the main road just North of Praze an Beeble, which will take you Into Camborne (we have already been on this stretch - unaware of the short cut), where we join the A30 heading East, until turning off at Indian Queens, and taking the A39 towards Wadebridge. A mile or so past Winnards Perch we start to look out for The Nine Maidens on the right hand side. Once seen, there is a convenient layby just further up (on the right) and it's just a matter of walking back down the grass verge and crossing over the stile into the field.
Aligned NE-SW the row is 107.6 metres long and consists of Nine stones ( makes a change for a Nine Maidens - to actually contain Nine stones !). Of these, Eight are either standing or leaning and One (at the NE end is recumbant). Some of the stones have been broken.
Away to the North East in line with the Row is another stone, known as the Fiddler. It is thought by some, that originally, this could have formed the NE end of the row.There are also some cairns scattered around the adjacent fields. 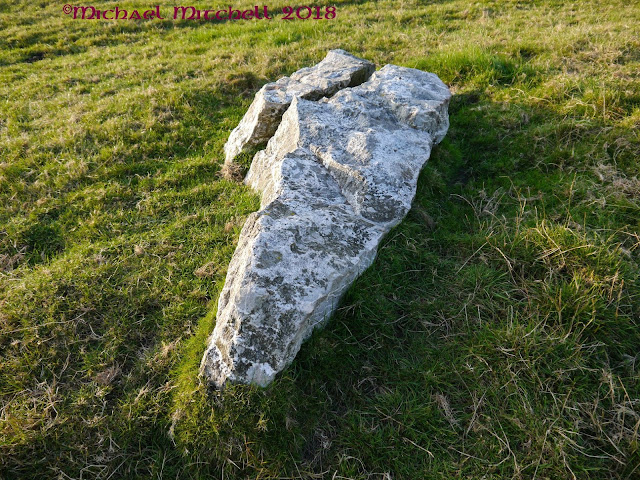 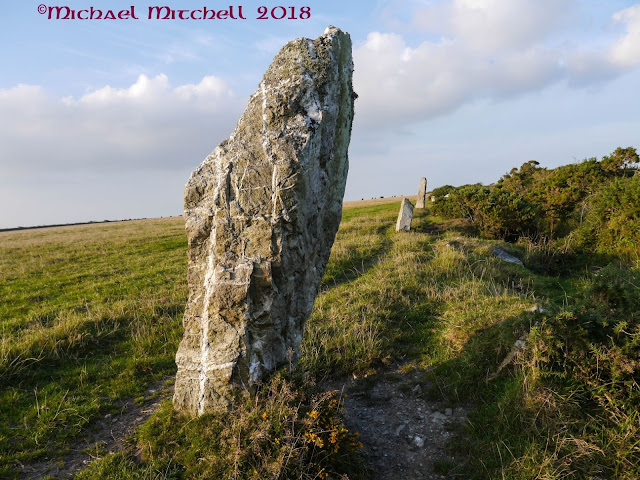 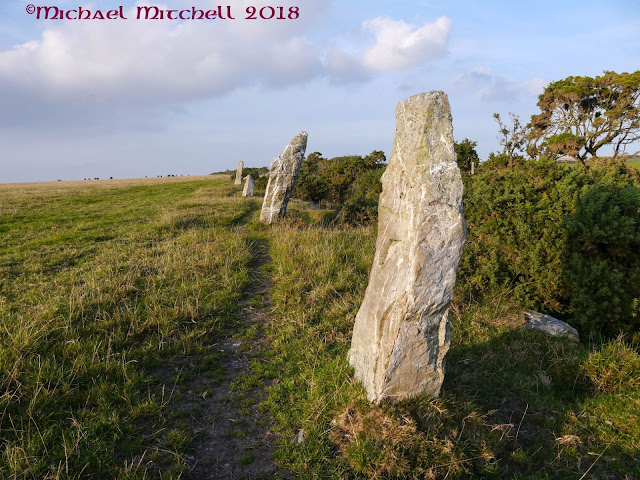 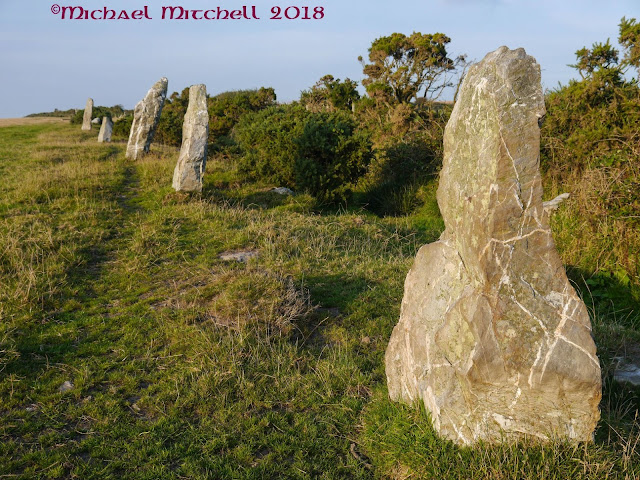 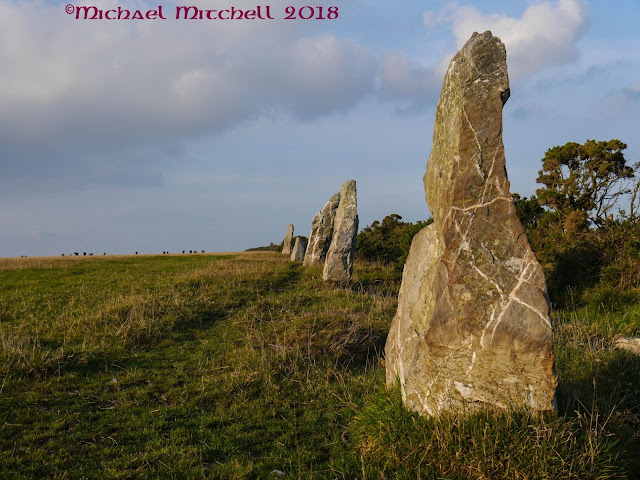 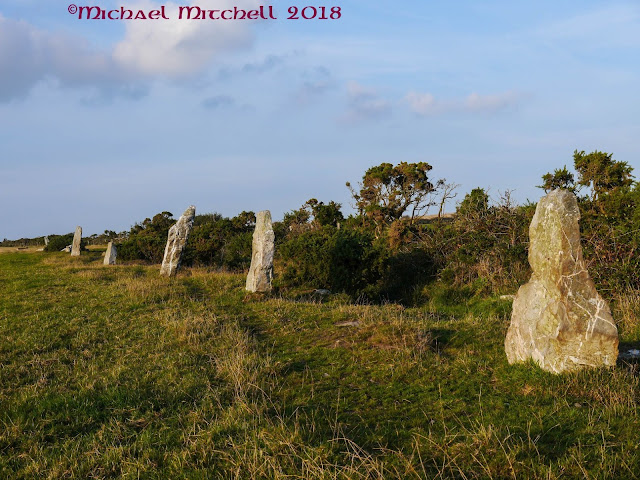 Posted by Michael Mitchell at 15:03