Cregennan Lakes. In the shadow of Cader Idris

Time to leave Devon and head up to North Wales for a few days. It's another hot and sunny day as we speed off up the M5. We call in to see an Aunty at Bayston Hill, near Shrewsbury, before heading off down the A458 through Welshpool and via  Cross Foxes to Tal Y Llyn and the long way round to Arthog, before taking the gated road up to Creggenan Lakes.
We intend to sleep over in the car at the car park by the lakes.
Parking up, we have a wander round the Lakes, take in the breathtaking scenery and have a quick look at the nearby standing stones of Carreg Y Big - alovely 1.9m tall tapered stone and Haffotty Fach, which is much smaller at about just 1m. It's getting late in the day as we enjoy a fabulous sunset and settle down for the night. A couple of Camper Vans arrive with the same idea. 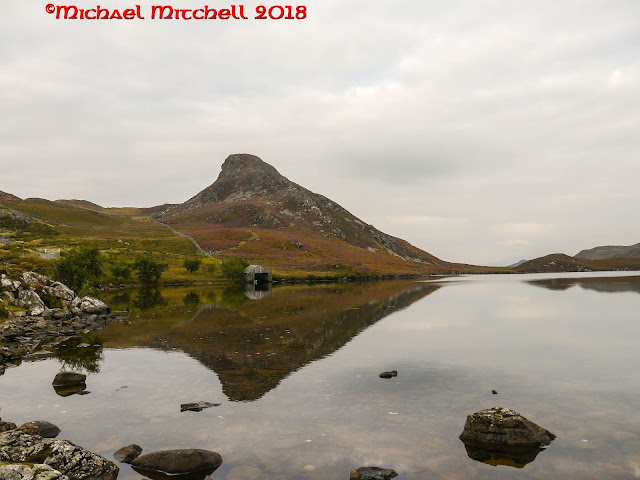 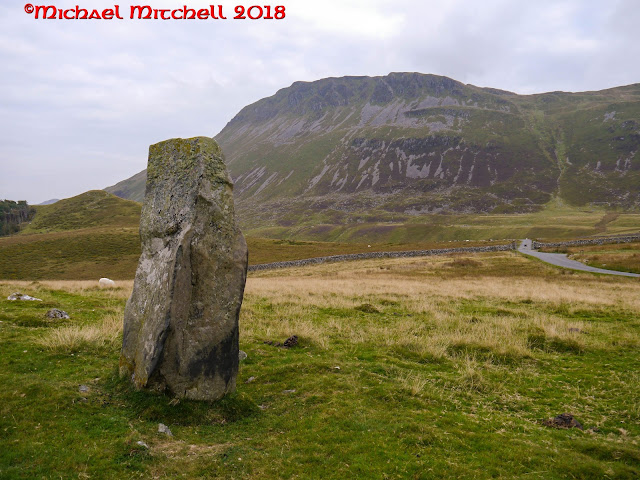 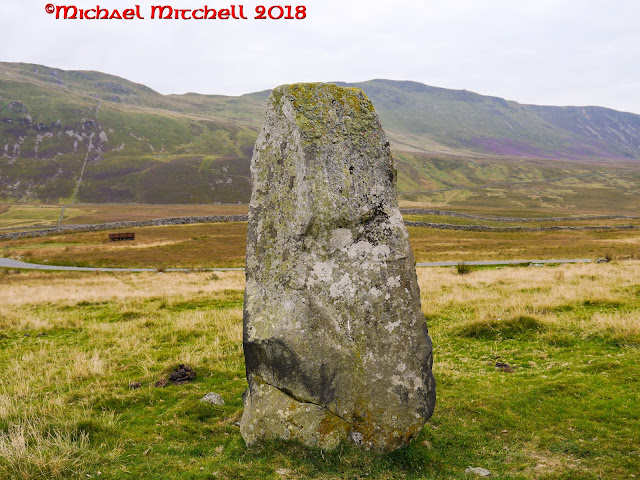 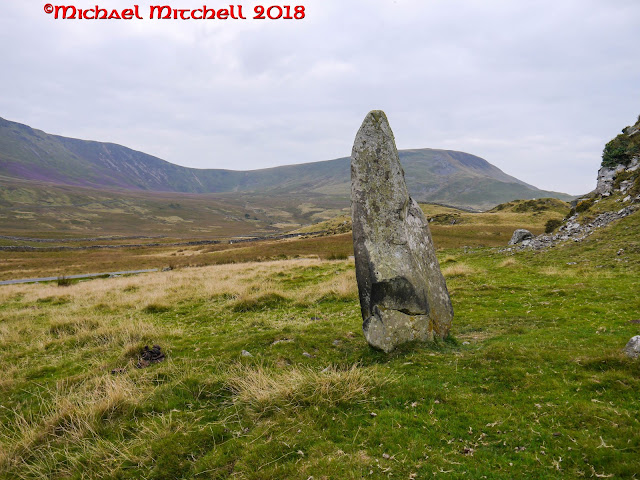 God - it can get cold, sleeping in a car, in the Mountains in September ! But it's a lovely bright start to the day - looks like it's going to be another scorcher !
We have another little wander round the Lake and the two standing stones, before heading down the lanes to find the Waun Bant standing stone. It's only a short trip - down to the next junction, turn right - go past the ruined Farmhouse that was Hafotty Fach, then the stone comes into view over to the left. There's a track that you can follow and it's an easy trek to get to it. The setting is spectacular - views in every direction. Tyrrau Mawr and Cader Idris stand out to the East, while Pared Y Cefn Hir (just above the lakes) stands out to the North East. 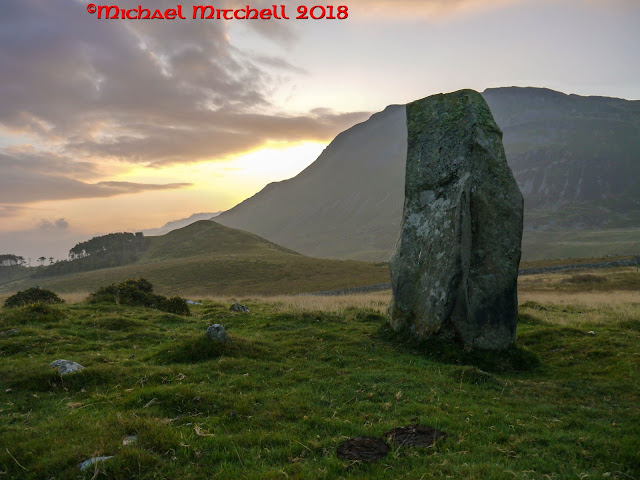 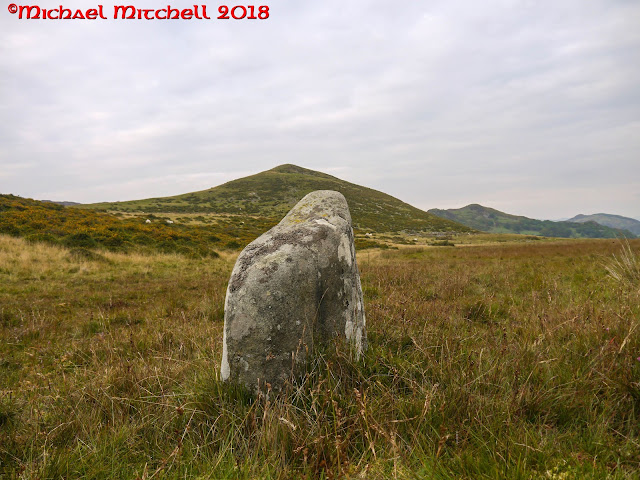 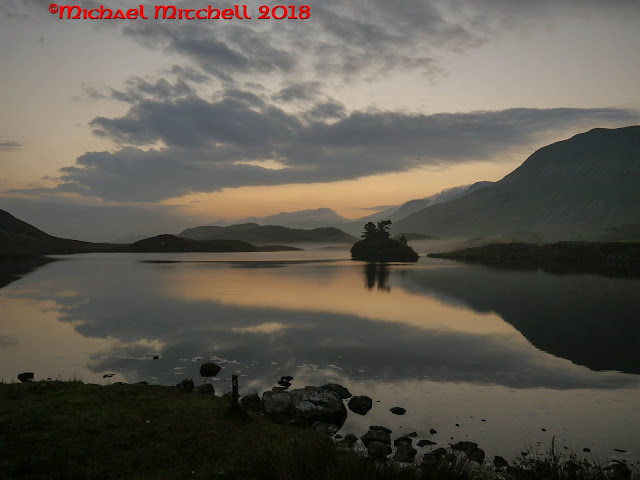 The stone is around 1.9m high and looks different, depending on which side you are facing.
Carrying on along, the road turns sharply right, but through a gate, another lane branches off. Be prepared for a lot of gates on all of the roads/lanes here ! 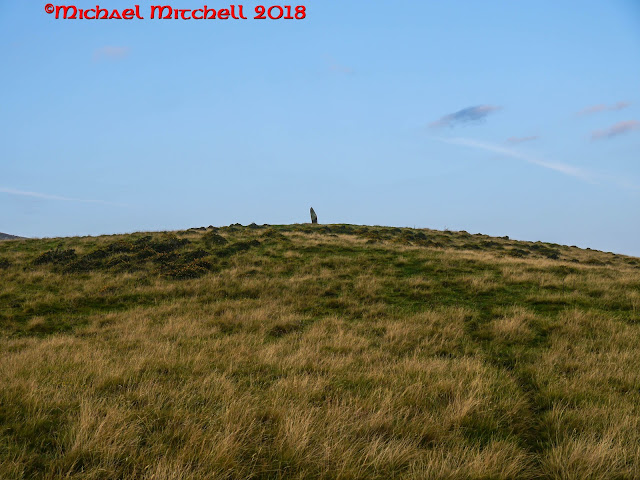 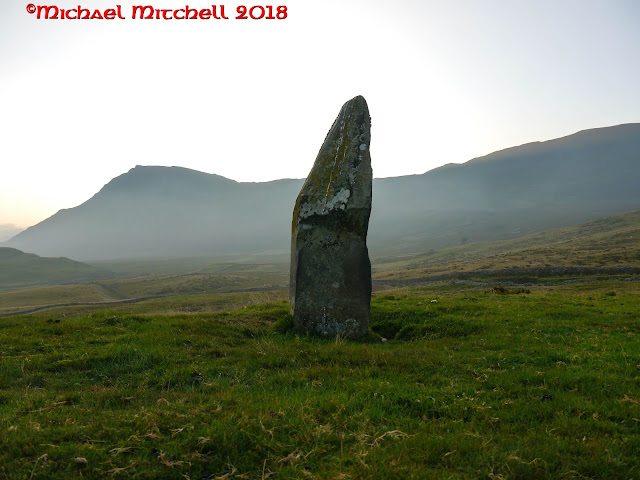 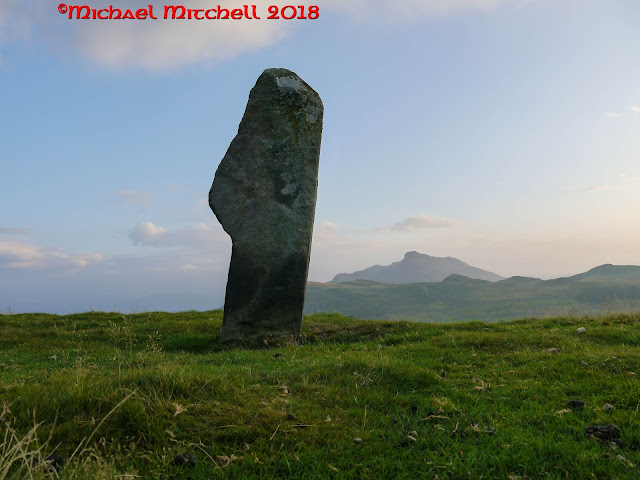 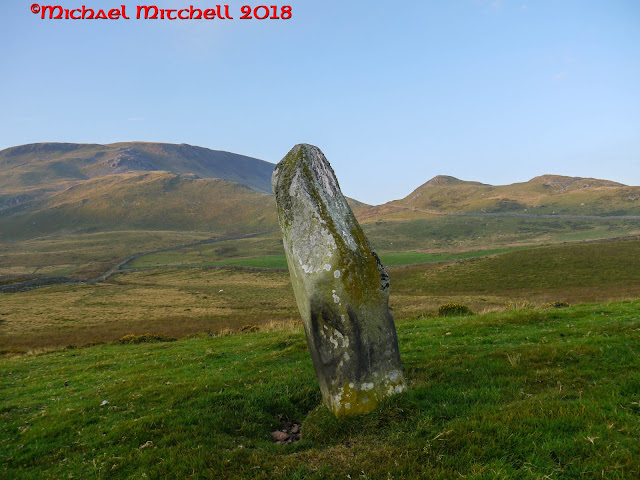 Following this road , brings us eventually through some woodland ( near Cyfannedd Fawr farm). As the woodland finishes (at another gate), here on the right is Bryn Seward stone row. The 4 remaining stones have been incorporated at some time into what is now a crumbling dry stone/rubble wall. It isn't that obvious at first, but luckily two of the stones are quite big. The first and last stones standing 2.1m and 1.9m respectively. The row is set on an East - West alignment. 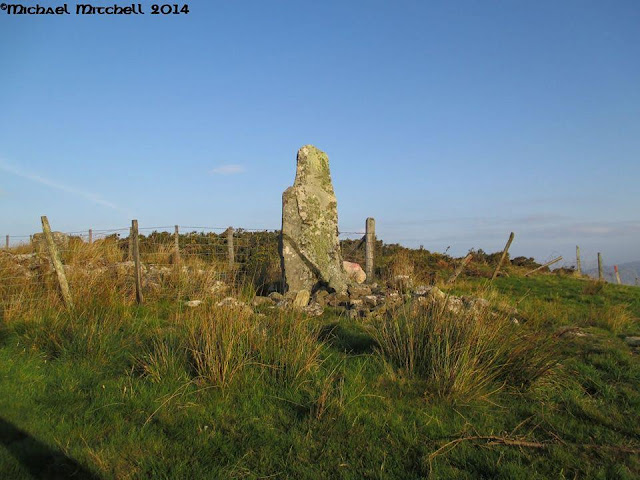 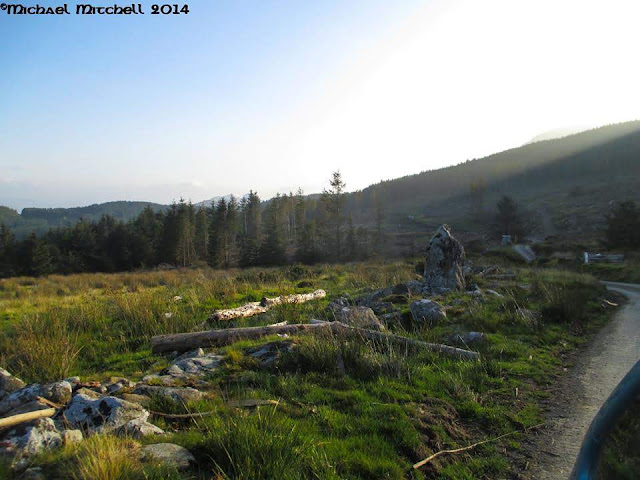 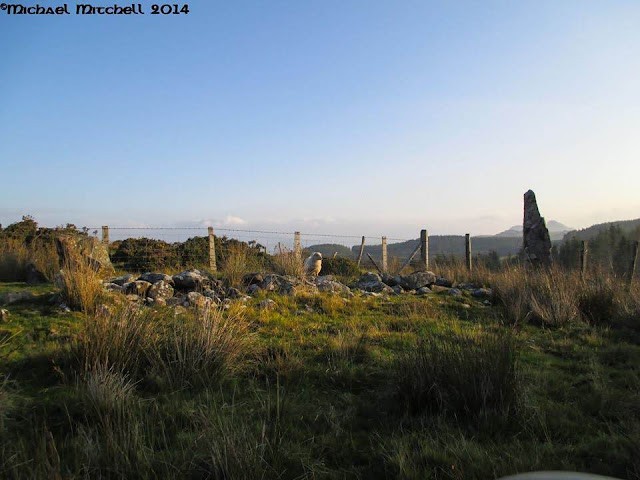 Carrying on through the gate onto more open Moorland, we find our next objective, namely the Waun Oer stone row. It's easily accessable, just through an open gateway.
There seem to be five stones, one of which is fallen. Several big Cows show a big interest in our presence, which makes the visit a little bit shorter than planned !. Again, there are great views from here - over Barmouth and the Sea as far as The Lleyn Peninsula. 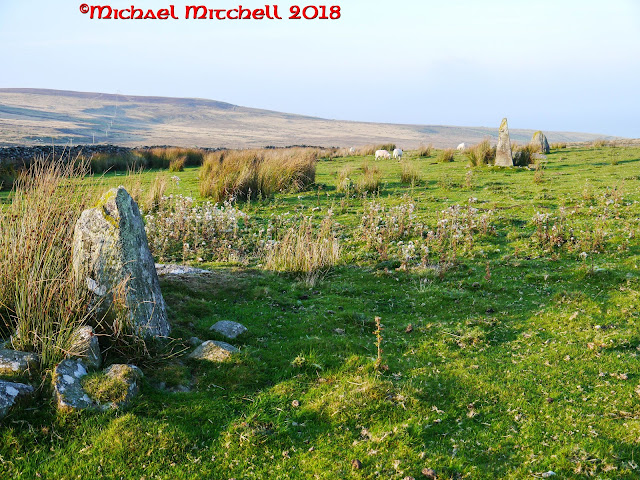 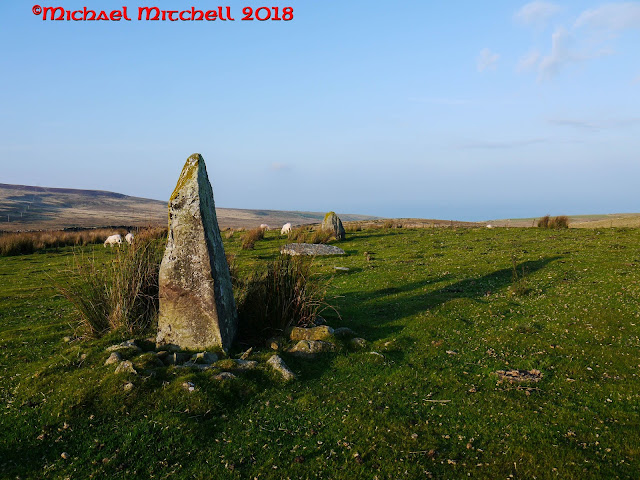 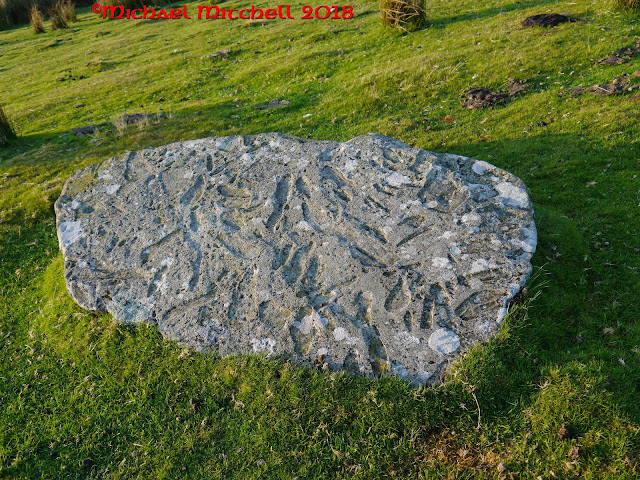 We head back, through the numerous gates and back down to Arthog, before making our way along the Mawddach Estuary to Penmaenpool and over the old toll bridge across the river, 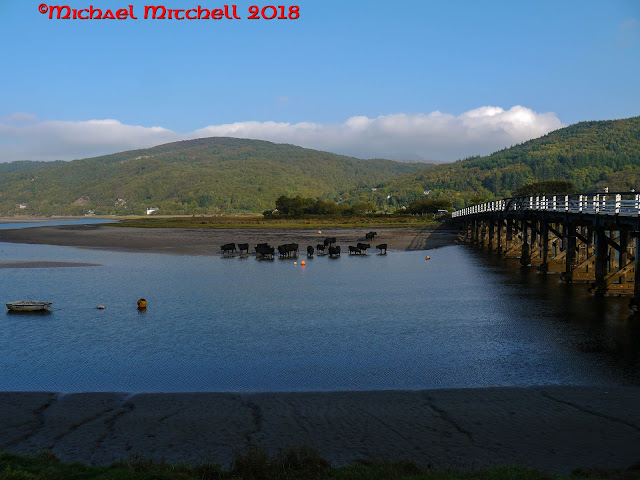 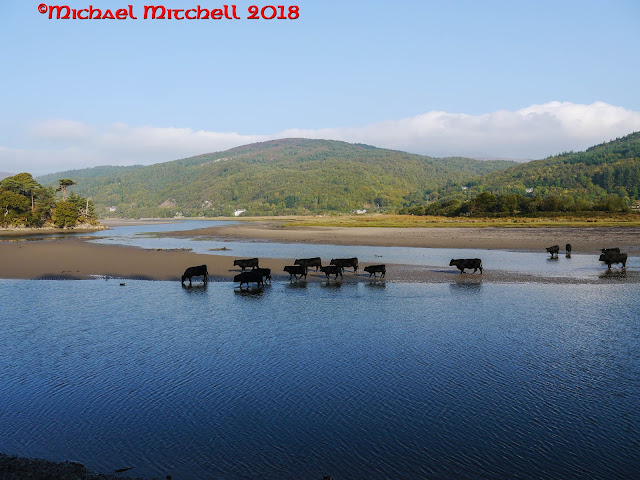 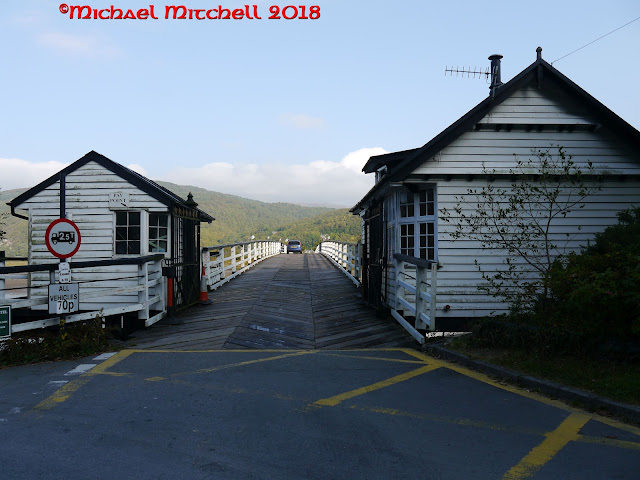 Our next stop is up in the hills above Barmouth to see the ruined Cerrig Arthur stone circle.
Just as you get to Barmouth, there is a right hand turn uphill for a couple of miles stopping by Silfaen Farm. A footpath here, through the farm and up the hill brings us to the circle. The views across the valley to Cader Idris are truly outstanding. It;s no womder that ancient people chose these spots to build their sacred places.
The field has been planted with crops - (Brassicas of some sort I think), but the existing stones are relatively easy to find.
Three large stones stand out and several other small stones can be found among the crops. There are several Sheep hiding in there as well ! Watching nonchelantly as they shade themselves in the Brassica leaves. 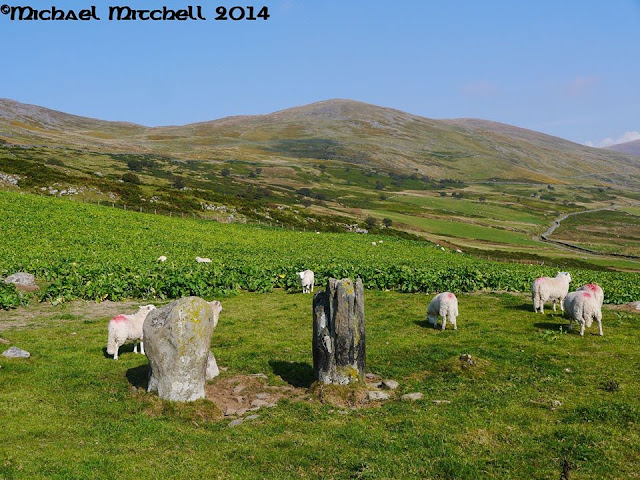 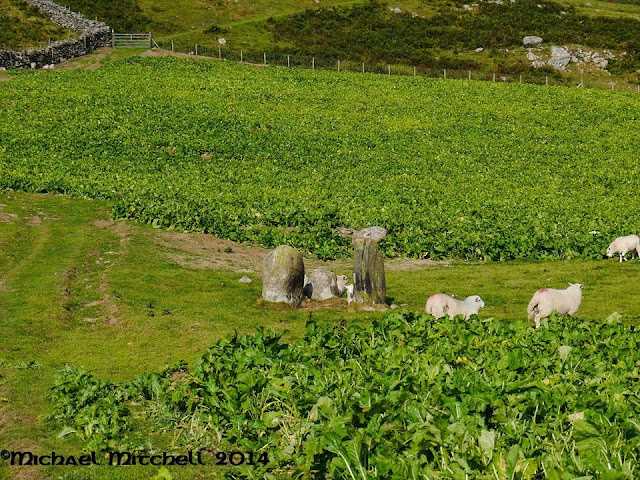 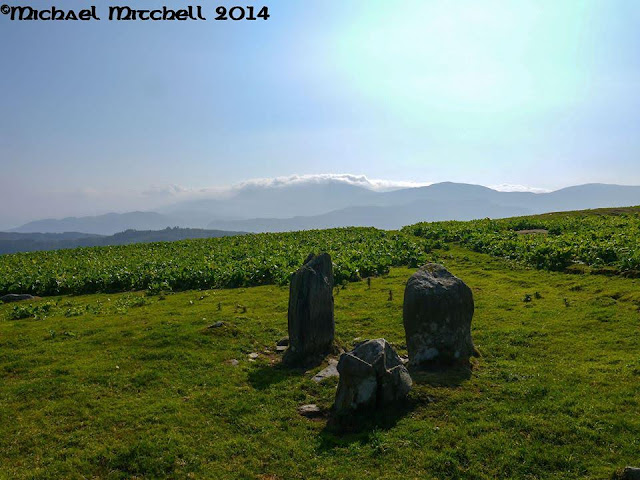 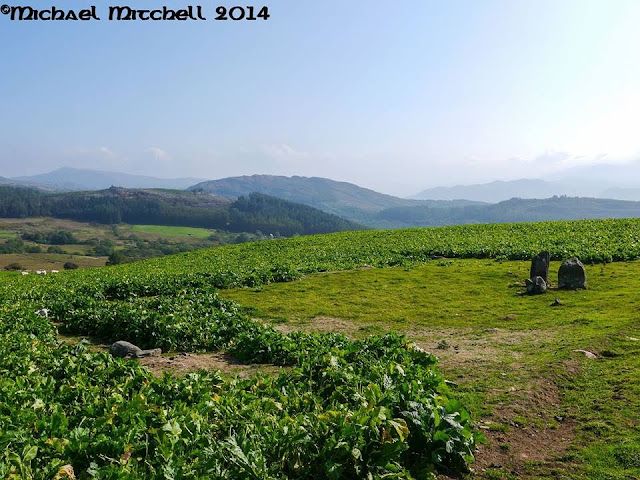 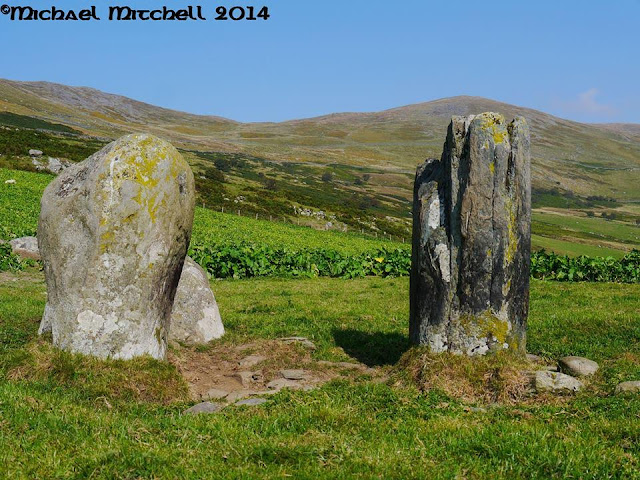 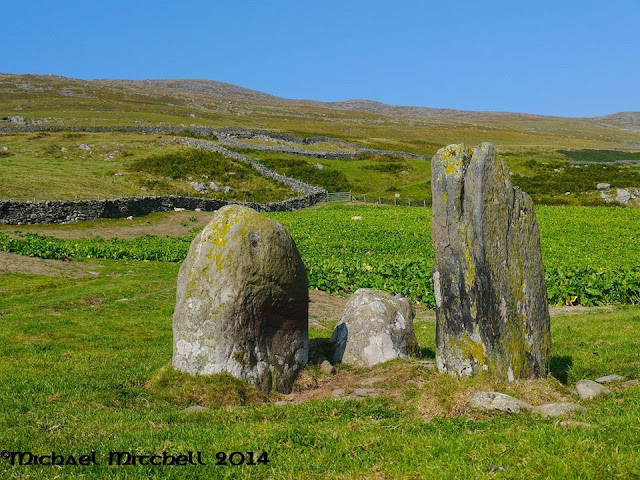 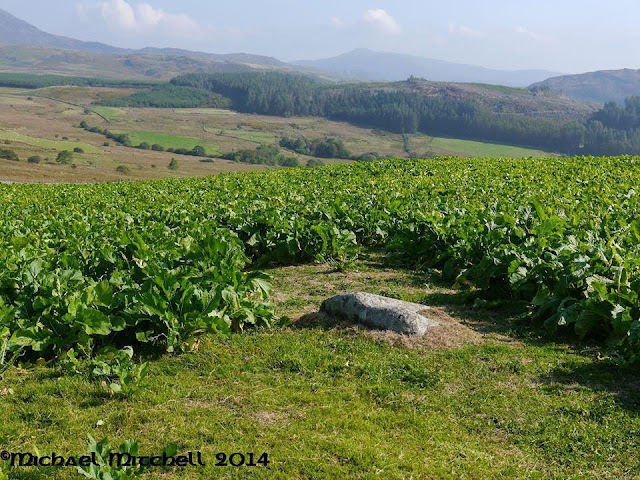 Back to the car, drive back down the lane and back out to the main road, through Barmouth and call in at Mochras, to see if there are any birds about.
A good flock of around 70 Sandwich Terns are roosting on the beach, Several Sanderling are running in and out with the tide and a solitary Wheatear flitters around the marsh. A couple of Sand Martins fly around, but it's mainly commoner stuff, The place is packed full of people enjoying the late Summer sunshine.
Time to head for the Hotel - which is still a fair way off. We are staying at The Cobdens Hotel in Capel Curig.
There is a reason for this by the way. The census of 1901 shows that my Gt Grandmother Elizabeth Anne Jones was living and working here as a Waitress. She was born in Llansannan. In 1903 she married William Anthony Eames - (they were both living here by then), and they moved into nearby Towers, where my Grandmother was born. They ended up on the Nannau estate near Dolgellau.

Posted by Michael Mitchell at 14:06