A Mega day in West Penwith

May 28th 2013
Today it is off down the A30 to Cornwall and West Penwith in particular.We both love this part of Cornwall and are lookig forward to getting back down there..... even just for a day !
As usual, the first stop off is Marazion, for a look over Mounts Bay and St Michaels Mount. Not much in the way of birdlife today - but the views are as splendid as always.
Next of course - is Aunty May's Pasties in Newlyn. The best Pasties out there.
Well, now down to the business of stones. First stop is the small hamlet of Kerris. I spent a week's holiday here many years ago and it hasn't really changed a bit.
Parking up at a convenient spot, we take a quick look at the ancient cross at the end of the road by the manor house. Then we walk back up the road to find the footpath across to Tresvannack Pillar. A lady looks out of her window and asks if we are lost. She then goes on to tell us the best directions to get there. The footpath sign seems to be missing, but we head across the field as directed. There are a few old Cornish stiles to cross. Kerris Standing Stone sits on the right in the middle the field, but we will check that one out on the return. We keep going until the telegraph poles cross in front of us, then (as directed) follow the poles off the path - to the left, through the gate and Tresvannack Pillar comes into sight behind a hedge. Another gate to go through and there it is in al it's glory.For such a massive stone, it is not easy to spot from the higher ground. Standing at 3.5metres (11 and a half ft). In 1840 the local farmer ,whilst ploughing  found a small cist and pit about 2ft away from the stone. Inside were two urns. The larger of the two contained cremated human bones, whilst the smaller, contained a snuff coloured powder (Borlase - Naenia Cornuniae).
The Kerris standing stone - a few fields back, is a large triangular stone. Aligned NNW-SSE it is around 2.35m high and is situated some 200 yds NNW of Kerris Roundago. This stone was excavated by Borlase in 1871, with only a flint and a pebble being found.
Next on the agenda is the Merry Maidens Stone Circle and associated Standing Stones. The Merry Maidens is an old favourite. Easily accessable and a popular spot for visitors, today is no exeption. A few people are having a look around. 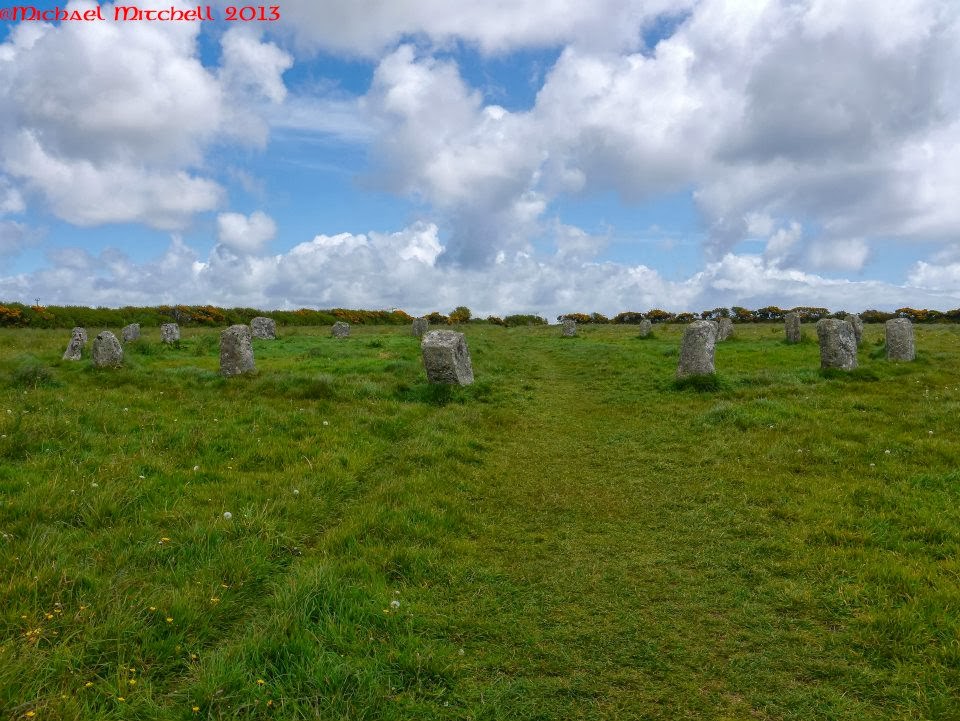 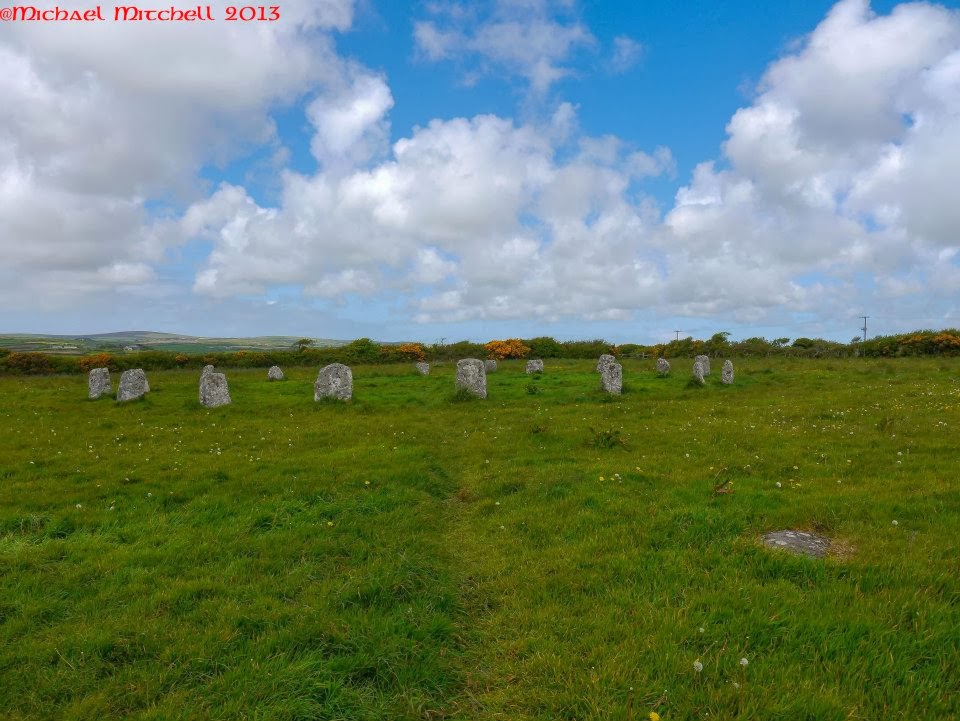 I decide to wander up the road a little way, passing the Nun Careg Cross and have a look at The Pipers of Boleigh. I've only ever seen them in passing, so it's nice to actually get up close and personal. These are the two biggest menhirs in Cornwall. They are just under 100m apart in a line NE-SW.
The NE Piper is the larger of the two, standing at 4.6m (15ft) and the SW Piper 4.1m (13 and a half ft). The circle isn't intervisible with the stones.
A text message lets me know that my daughter has gone into labour. Looks like today is the day !!
Back over to the Maidens, then the opposite way down the road, past Tregiffian Barrow and through the field to Gun Rith Standing Stone. 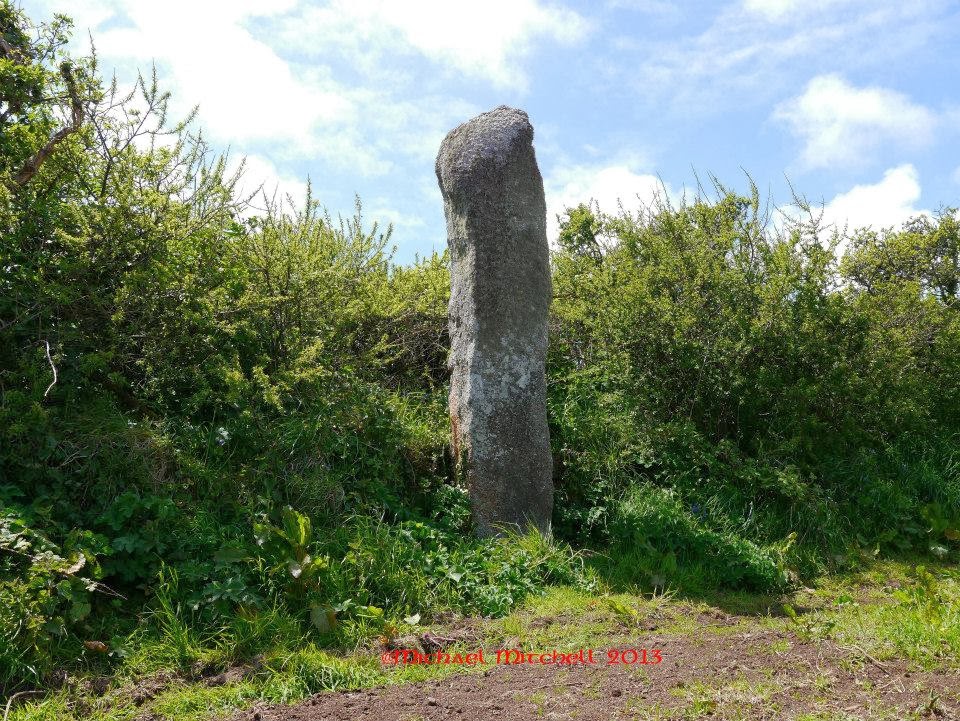 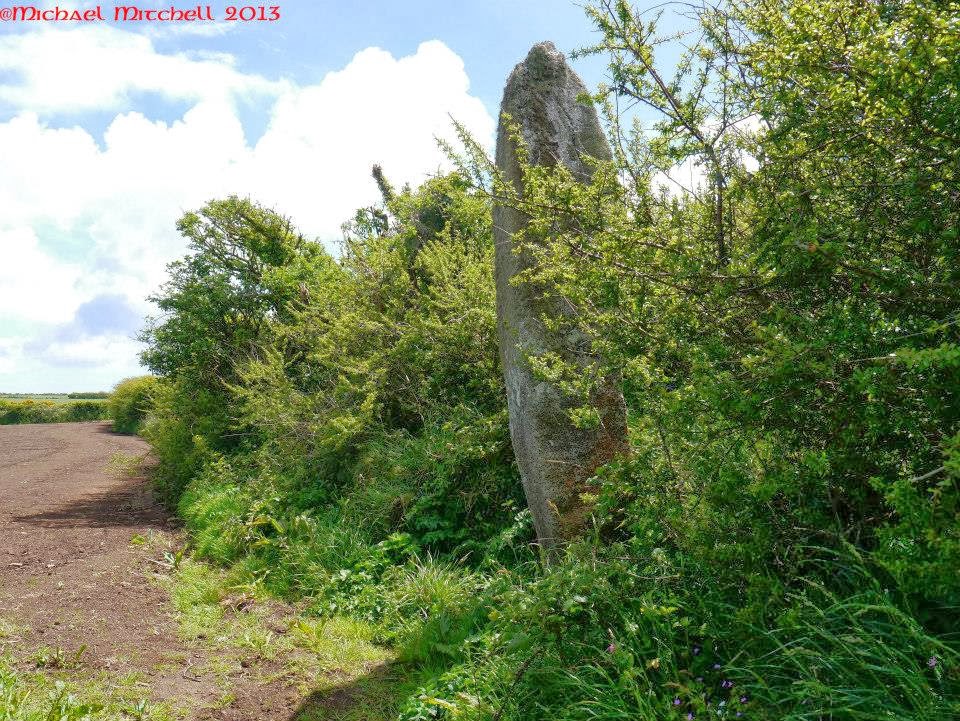 Another familiar and impressive stone. It now stands in a concrete base, having fallen over a number of years back. It stands at 3.2m (10 and a half ft) against the field hedge, with a clear view over to The Merry Maidens. When excavated by Borlase in 1871, all that was found was a beach pebble.
We carry on, heading towards Sennen Cove, passing and stopping at Boskenna Cross and Choone Cross, both in St Buryan Parish.
It's an ice cream stop in Sennen Cove and the news comes through, that my daughter has had a baby boy. A great day just got even better.
Carrying on out of Sennen and through St Just. There's a quick stop to look at a standing stone in a field to the left. This is Porthmeor Standing Stone.
I have to content myself with some photographs from the roadside, as I don't fancy playing with the Bullocks in the field.
Next up - we stop in Zennor village. I'm going to walk up to Zennor Quoit from here. Again it will be a first visit for me. J has a look around the church, while I wander off up the road and along the footpath over Churchtown Common and up Zennor Hill. It's a steep walk up the hill as a shower passes over. Once at the top, the going is quite wet, as I follow the tracks through the gorse. First of all, I have an unsuccesful search for Sperris Quoit, before cutting across to Zennor Quoit. 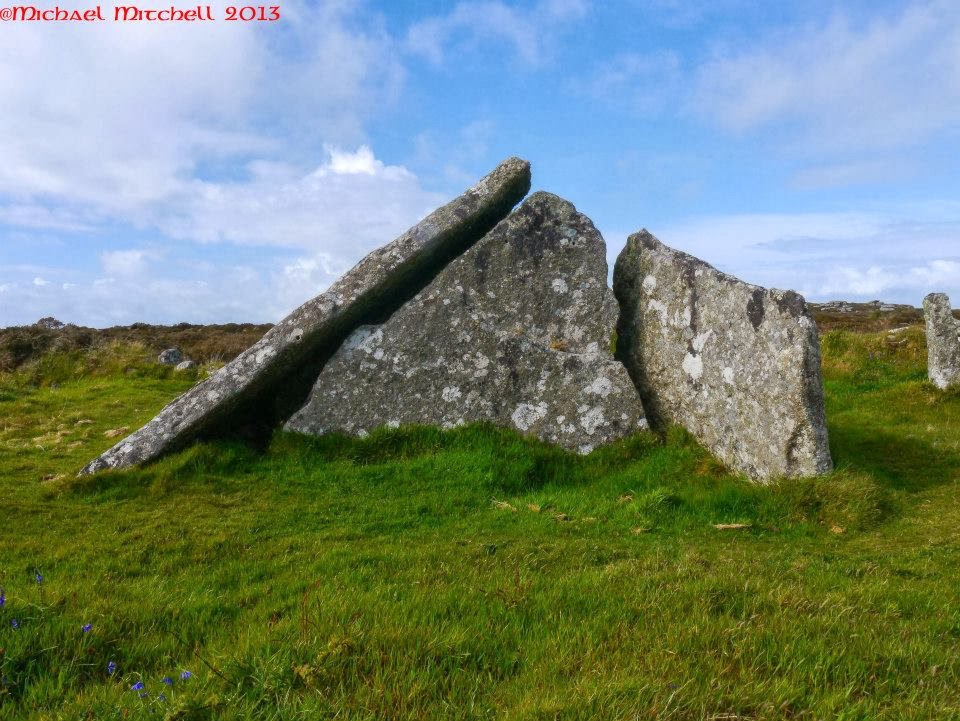 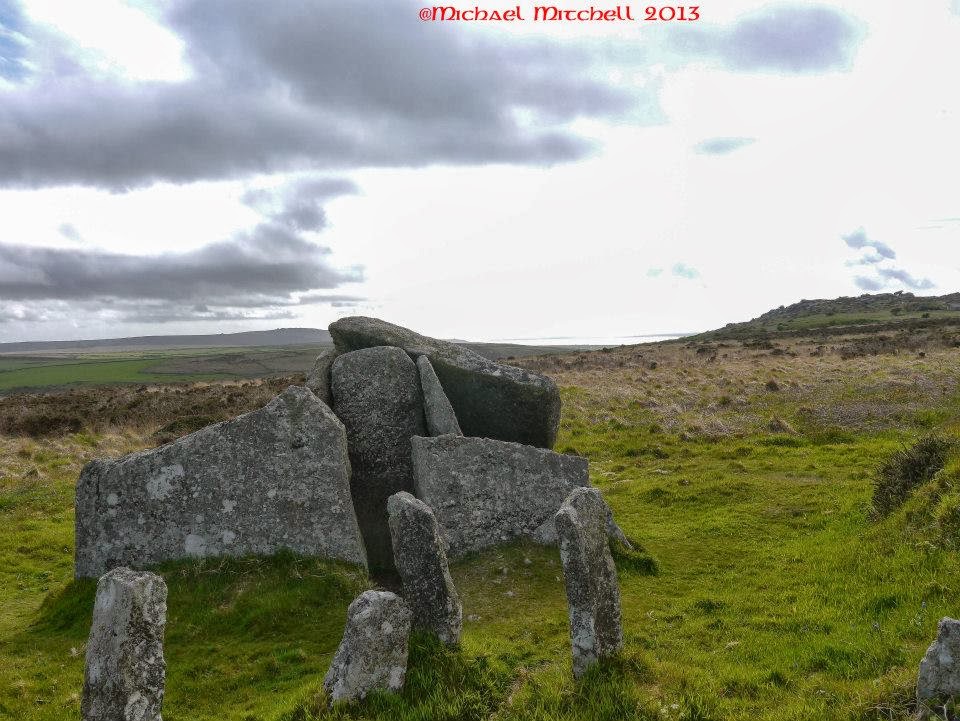 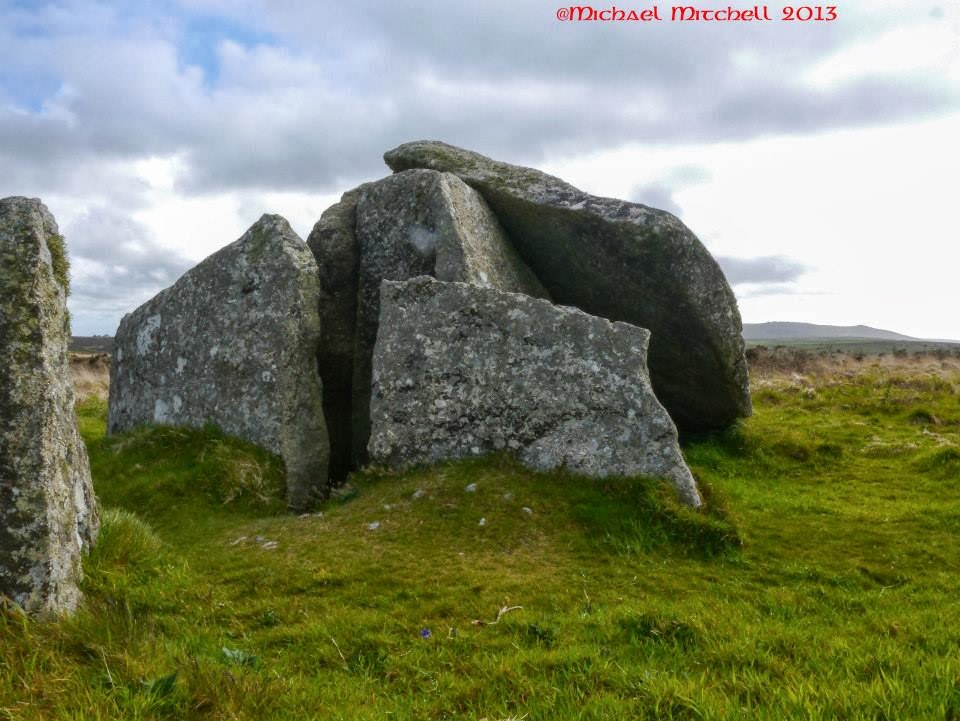 This would have been an impressive sight in it's day. Two massive blocks of granite form an entrance facade, leading to the blocked chamber. The massive capstone has slipped off.
A Buzzard Circes overhead and a Cuckoo calls in the distance.
Another shower is threatening, so I make my way back down to the village, having a quick check up on the mermaid chair in the church. 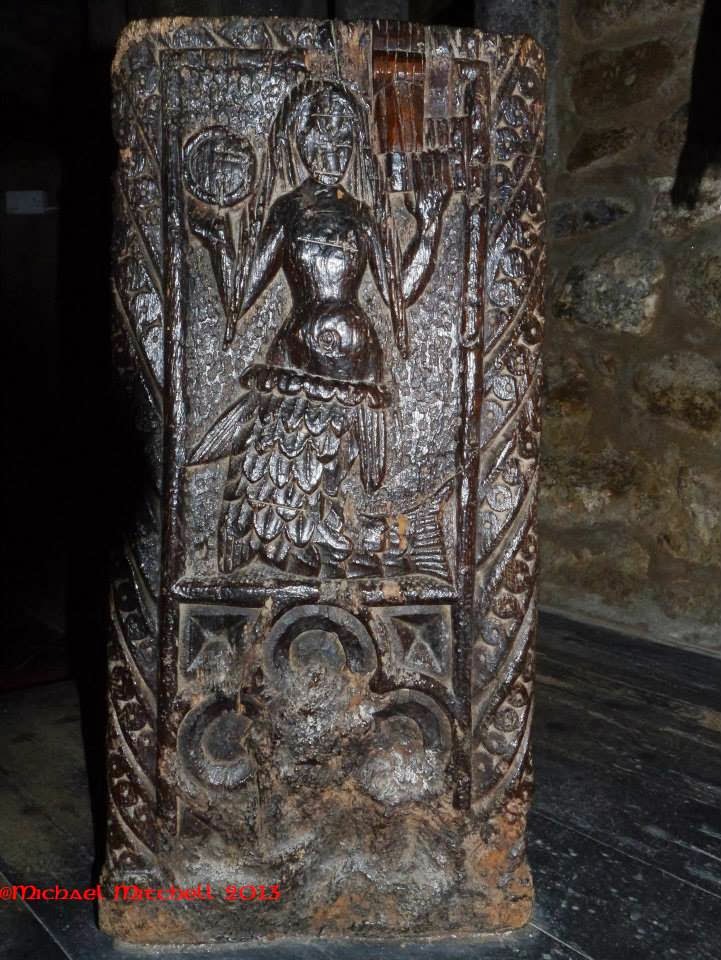 Time is getting on but there is one more stone to see before heading back to Devon.
Carfury is a small hamlet hidden away in the lanes below Greenburrow Mine ( better known as Ding Dong Mine). We drive past the footpath and end up by Ding Dong in Boskednan. A quick turn around - this time we think that we have found it.
A muddy track leads up the hill. Over a gate - the footpath goes off to the left, but I head up over the rough ground to the right, following the hedge up and through a gap in another hedge. The going is not easy - lots of mud and lots of brambles. Eventually after a bit of searching, I see the tall shape of Carfury Menhir. Like Tresvennack - for such a tall stone, it is not easy to see from a distance. Anyway, it is well worth hunting out. A lovely slender 3m (10ft) high stone. It has been incorporated into an old low field wall.
Back through the brambles,mud and gorse to the car, for the drive back up the A30. What a terrific day.
further reading and refs
Ian Cooke McNeill - Antiquities of West Cornwall
Craig Weatherhill - Belerion. Ancient Sites of Land's End
William Copeland Borlase - Naeniau Cornubiae
Cheryl Straffon - Ancient Sites in West Penwith
Cheryl Straffon - Meyn Mamvro magazine
Posted by Michael Mitchell at 20:06