February 26th 2013
Another fine Sunny day, so today, we are off down the Beara peninsula to visit some old favourites and see some new ones.
First up is Dereenataggart West Stone Circle. As always, the views over Bantry Bay and Bear Island are wonderful. There are two Stone pairs, each located 200m away from the circle. One to the North East and one just West North West. Looking over the field boundary to the NE, it looks like an impenatrable mass of gorse. The other way looks a little easier. Following a boreen up between the fields, I find what I believe to be the stone pair, in the boggy field to the left. The NMS describes them thus - "Description: In rough upland grazing, on a mantle of blanket bog on a gentle SE-facing slope. Two upright stones, aligned NW-SE, are both roughly rectangular in plan and stand 1.3m apart. The NW stone (0.60m x 0.28m; H 0.84m) narrows to a pointed top at its SE side. The SE stone (0.8m x 0.42m; H 0.82m) narrows slightly as it rises and has an almost level upper surface. A multiple-stone circle (50, vol. 1) is c. 200m to the SE."
What relation all of these mouments have is difficult to say. 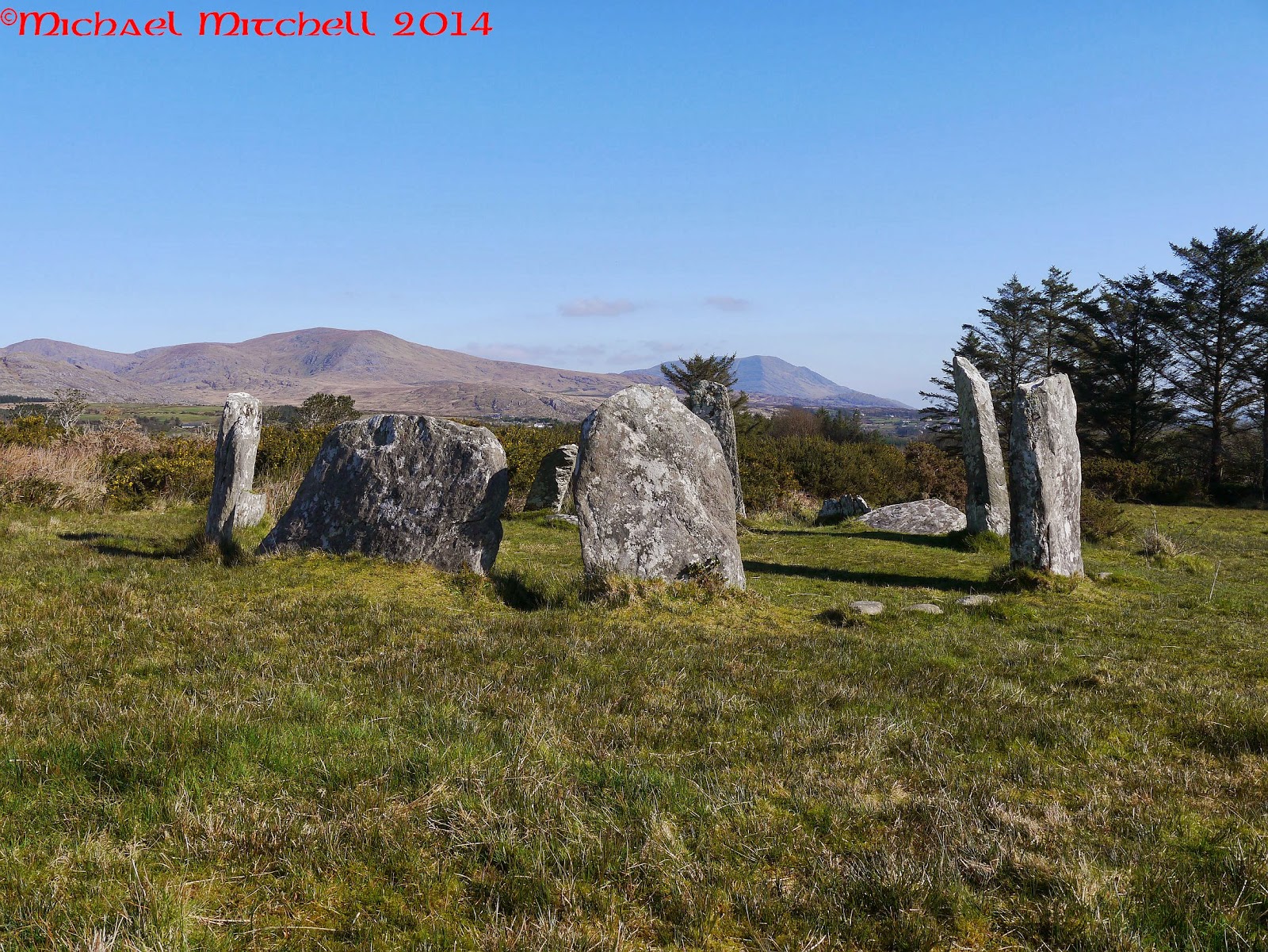 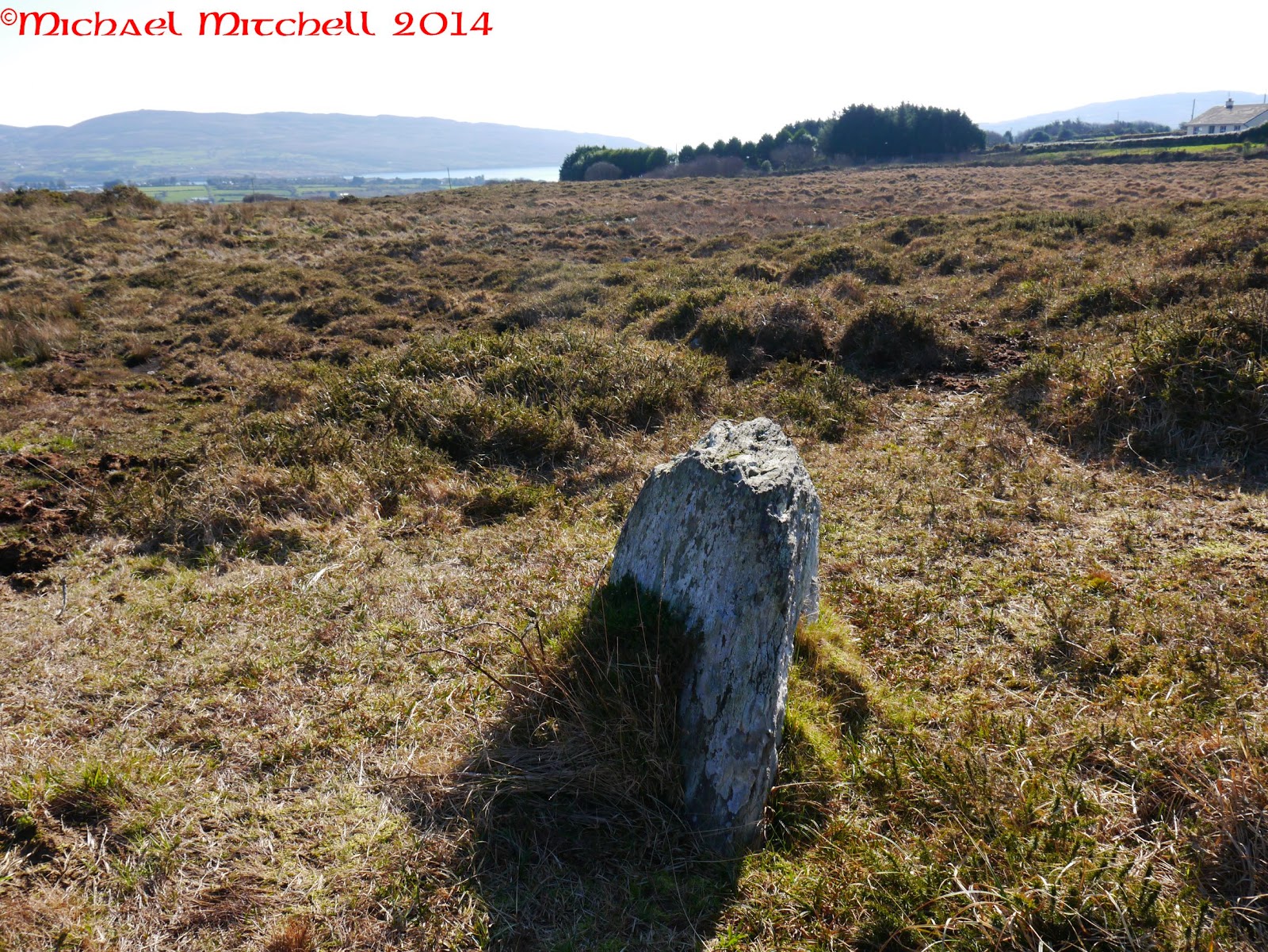 Driving further round the lane, we have a quick stop off at the Ring Fort at Teernahilane, before lookig unsuccesfully for the boulder burial and Stone Pair, but once again they prove elusive. Next time ......... 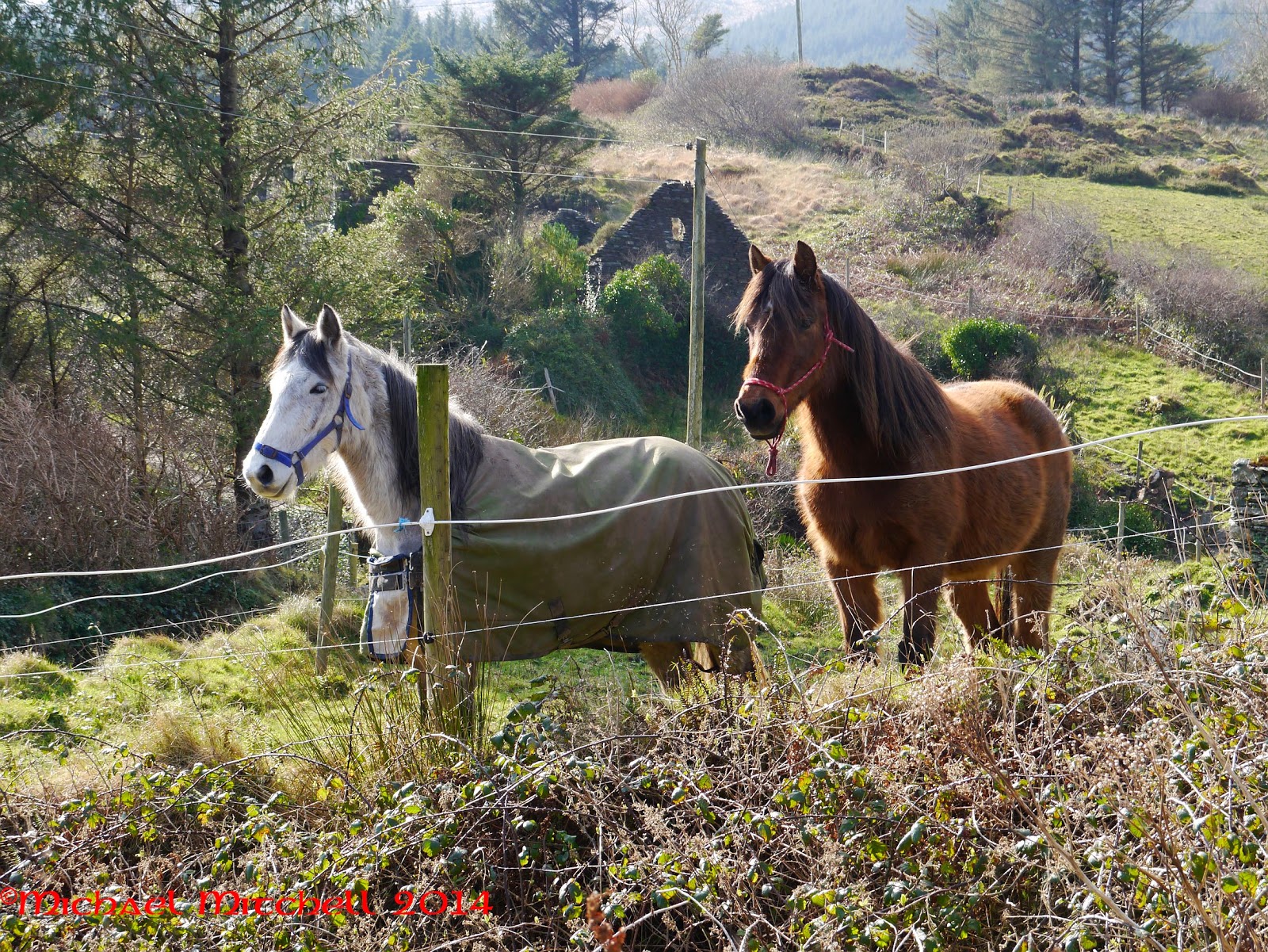 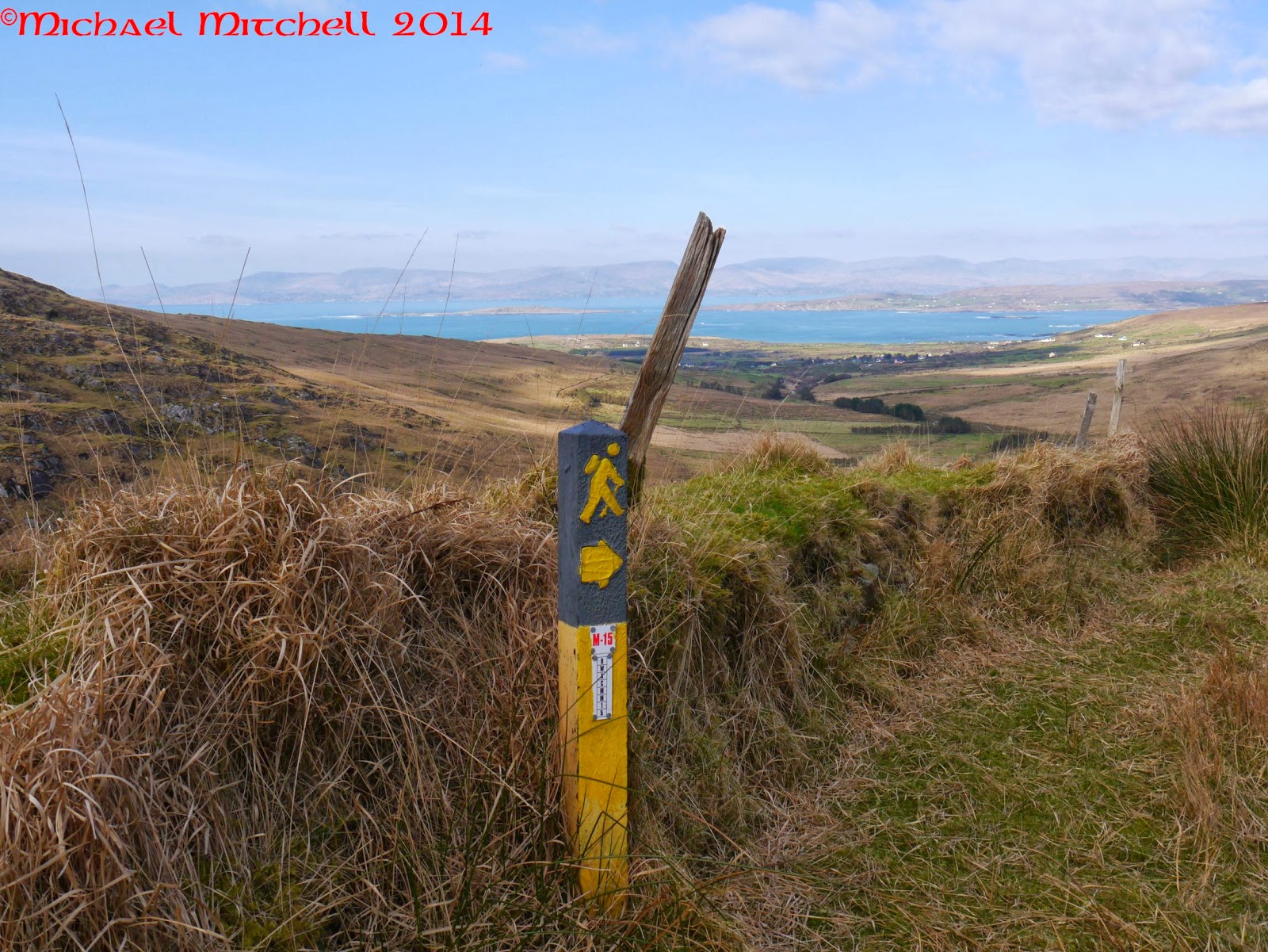 We park up a little way further on. Two horses poke their heads over the fence to see what we are up to. This is where the Beara Way footpath goes up into the Miskish Mountains, and it's this track that I am going to take up into the hills to find Teernahiane Wedge Tomb and accompanying standing stone.The solid track turns into a wet sodden boggy track as it goes through the conifer plantation. It's uphill all the way. Eventually the track leaves the plantation as the hills of Knockoura to the left and Miskish Mountain to the right.Heading towards Miskish, there is a gate on the right. I hop over this and cross the boggy ground to the Wedge Tomb.It's in ruins, but still looks magnificent. Views are extensive to the South and East. Teernahillane Ring Fort sits way down in the fields below. 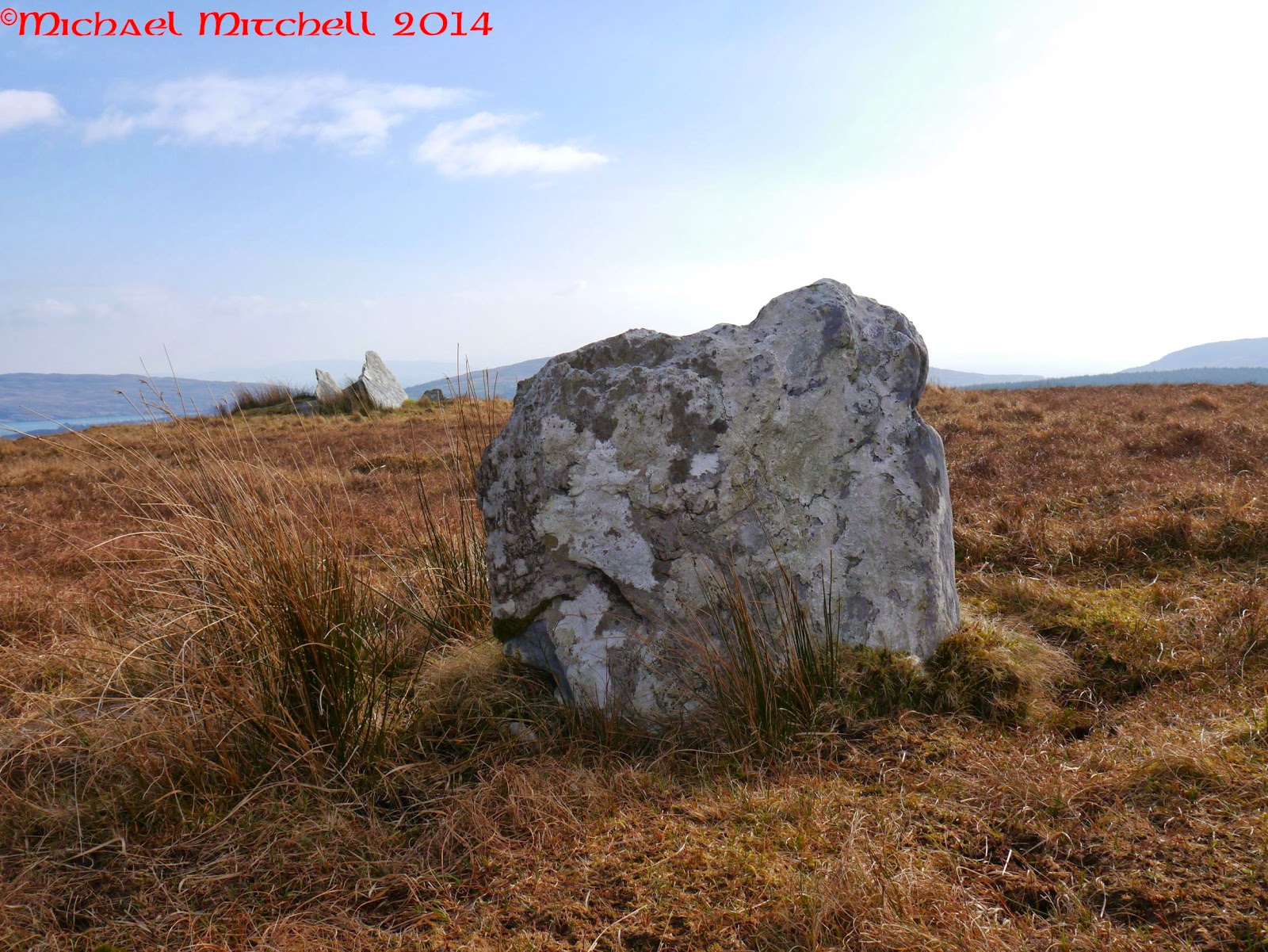 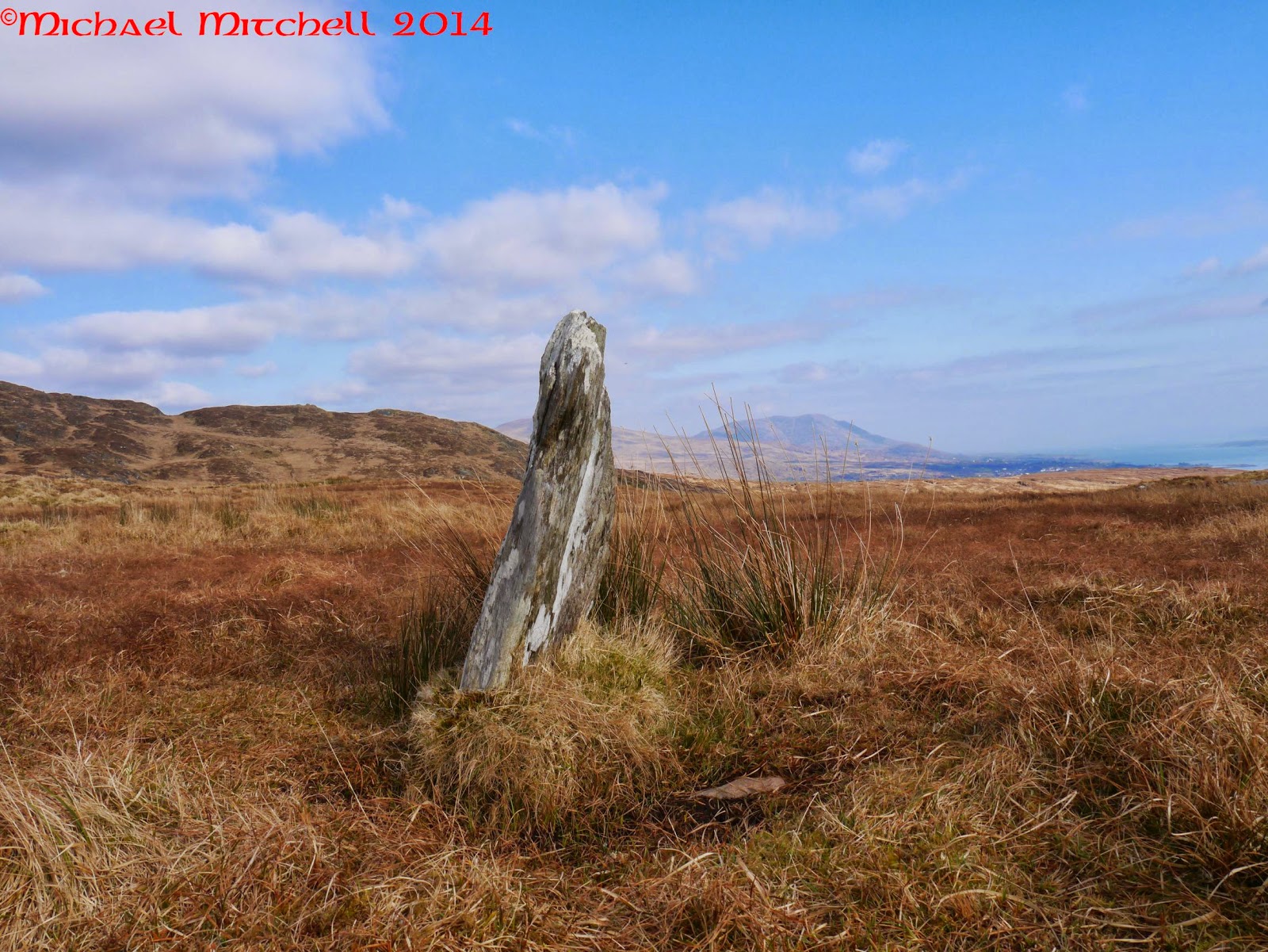 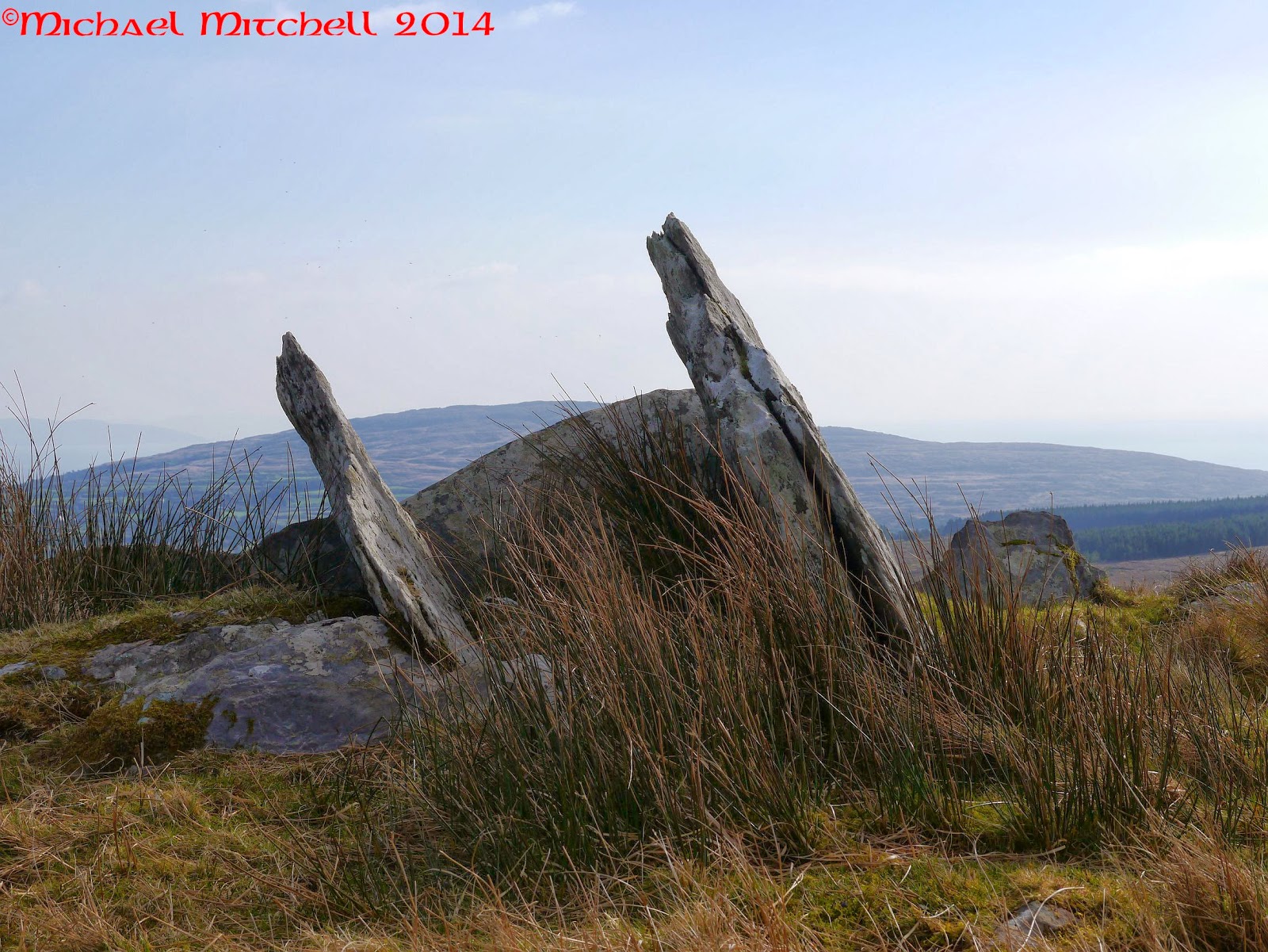 The standing stone is aligned ENE-WSW and is just under 1 metre in height.(0.98x1.04x0.12).It sits roughly 16m to the North of the wedge tomb.
The wedge tomb itself is aligned NE-SW.
The walk down is a lot easier than the slog up,and I am soon back at the car. The Horses raise there heads and come over to the fence 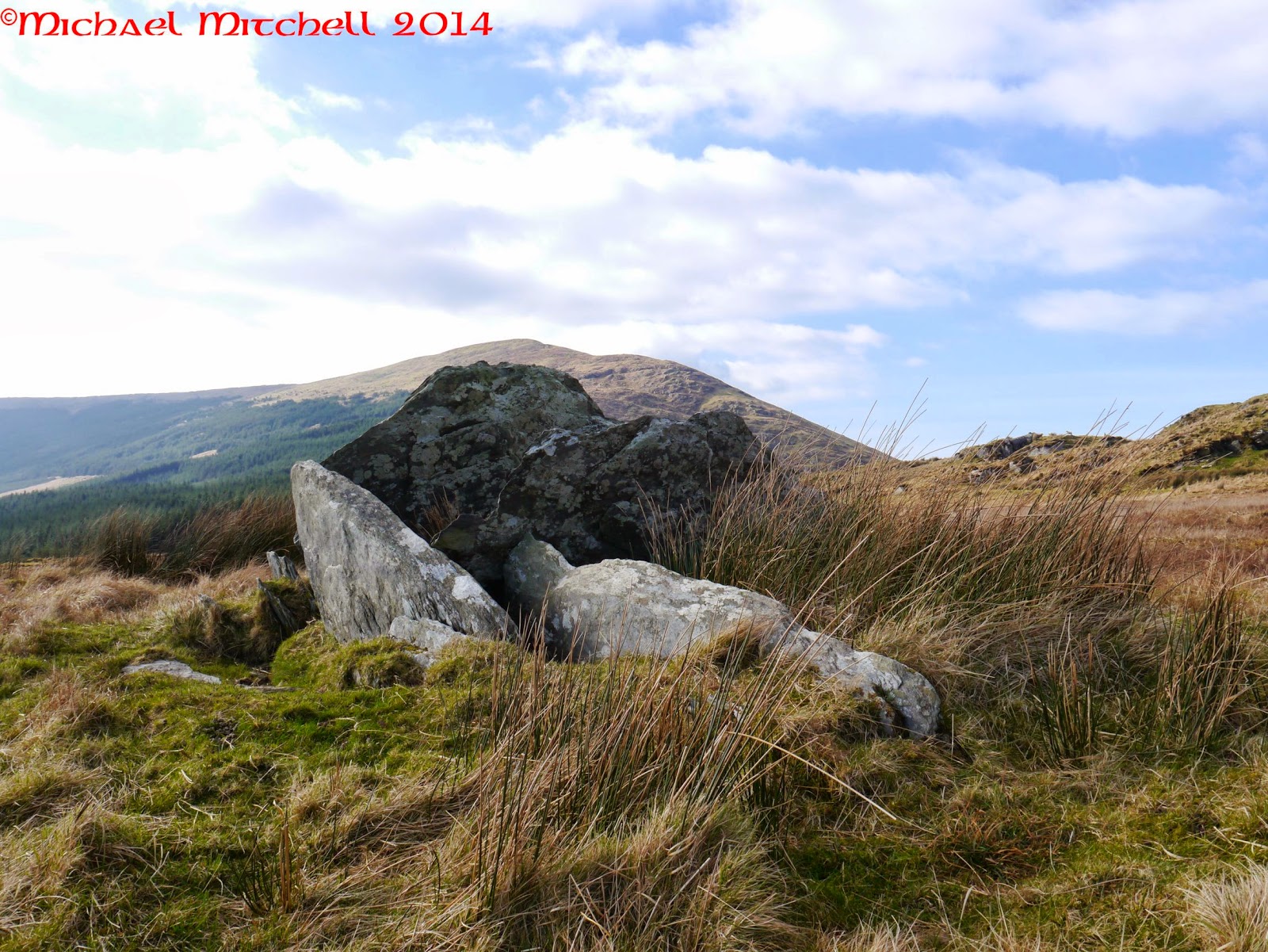 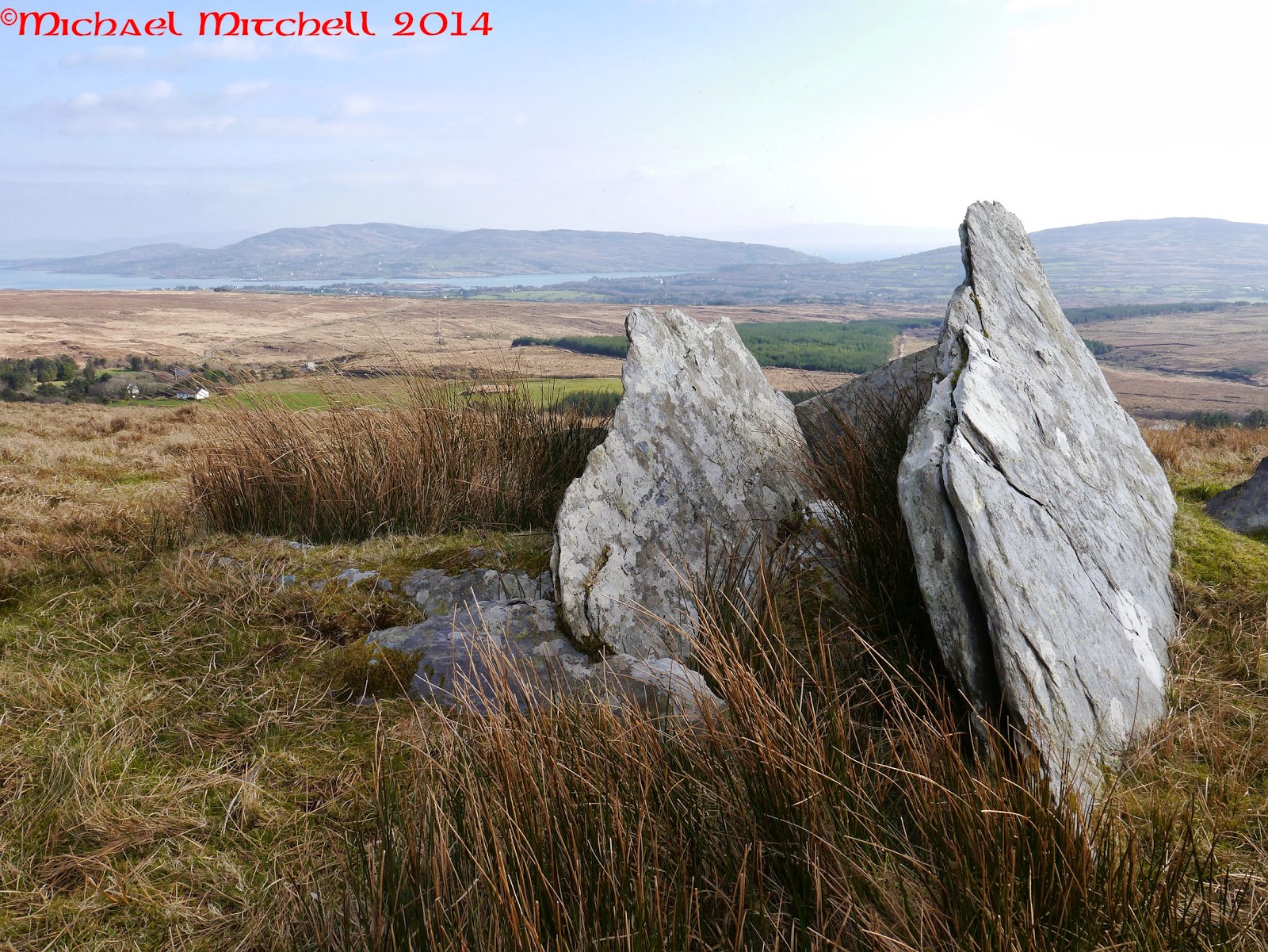 There is probably just enough time to get to see one more site, before the trek home.So we make our way back out onto the main road and head towards Cahermore then taking the turning on the right, which leads to Kealoge. There is a right turn and the road climbs steeply up towards Knockgour, the summit of which is marked by the large transmitters. We park up near where the Beara Way comes up from Teernahillane. The stones are over on the right. Described by the NMS as an anomoous group - "Description: In bog land, SW of Knockgour on gentle S-facing slope. Pair standing stones, 3.4m apart. Taller stone (H 1.9m; 1.36m x 0.25m) is rectangular in shape, long axis N-S; second slab to NNW (H 1.25m; 1.3m x 0.12m); long axis E-W." they look like they were once part of something larger - a circle perhaps ?
The views up here are amazing, Mountains and Sea all around. 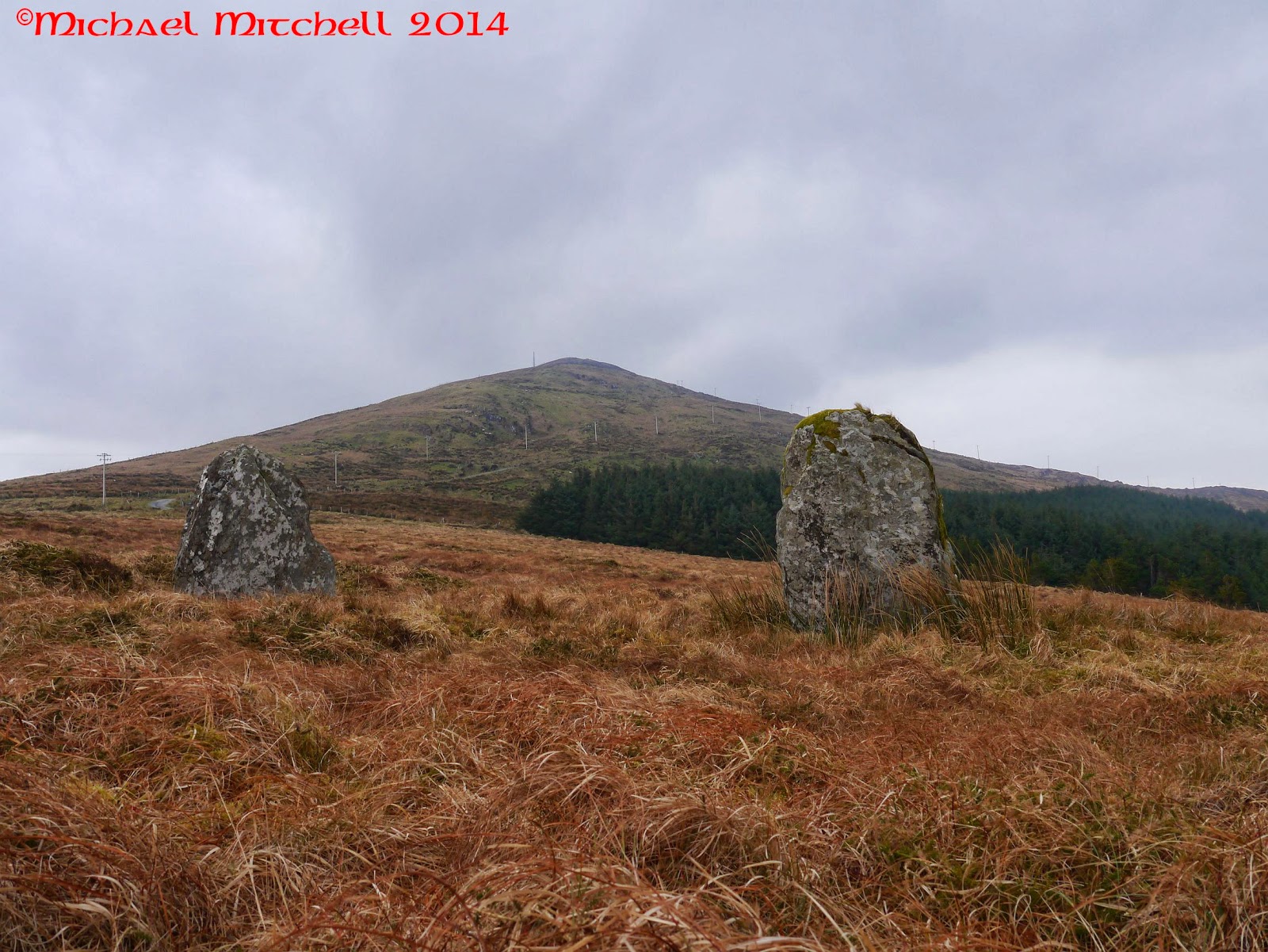 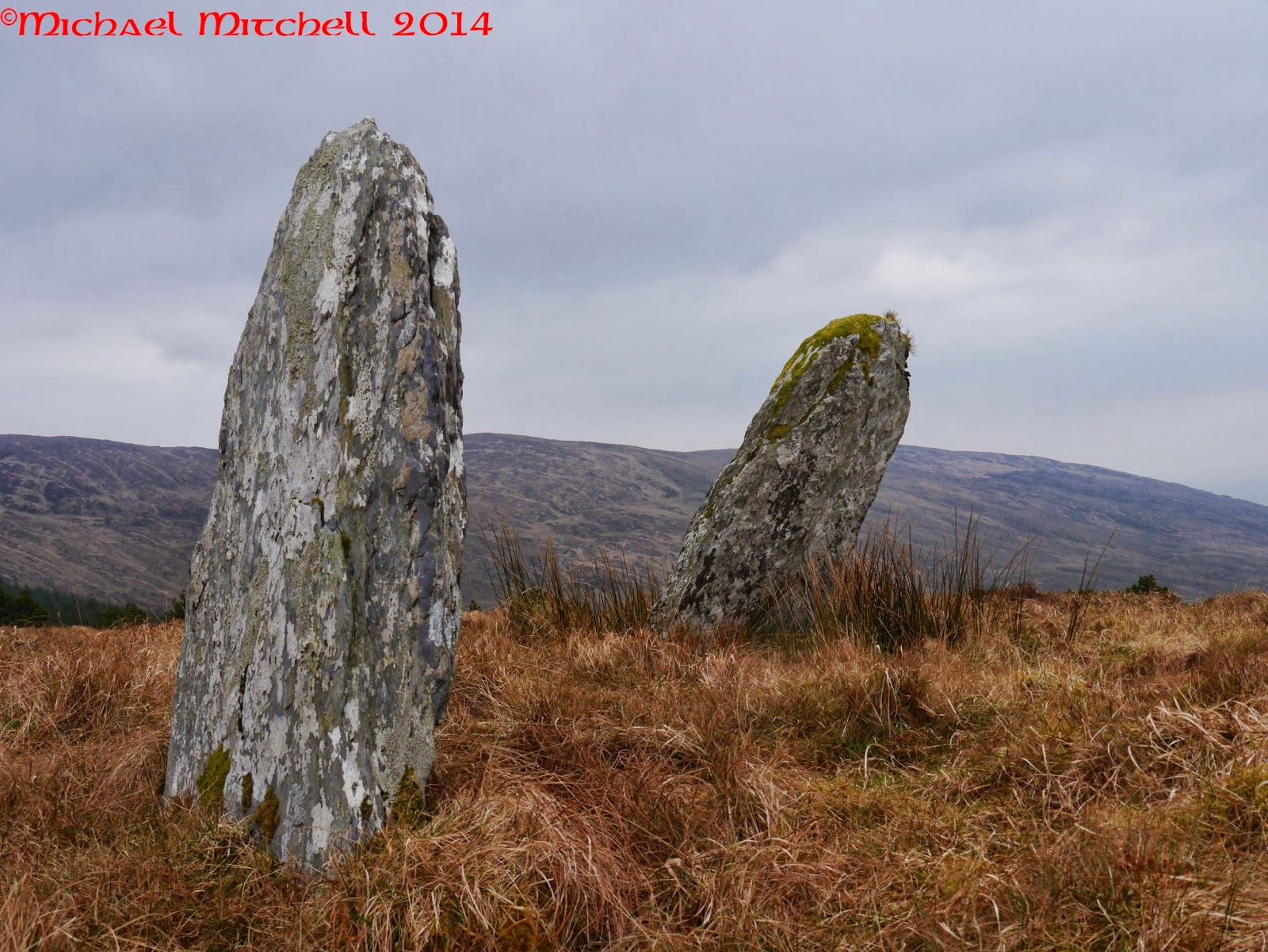 Heading back down the lane - the pure quartz stone at Kealoge is down the hill to the right. That will have to be another day though, the light is starting to fade and there's a long journey home.
Posted by Michael Mitchell at 14:13